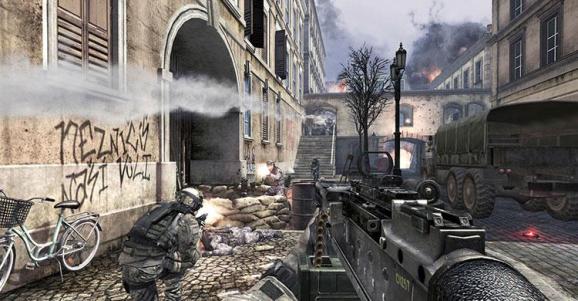 Activision and Tencent's China-only Call of Duty: Online in action.

With that investment, Tencent, the world’s third-largest Internet company behind only Google and Amazon, now has stake in a few of gaming’s biggest companies.

In gaming, Tencent started with a roster of massively multiplayer online games on its QQ Games portal. After years of growth, it expanded into even larger markets with the 2011 acquisition of League of Legends developer Riot Games.

League of Legends is one of the most-played games in the world. It’s a free-to-play multiplayer online-battle-arena title that generates million of dollars in revenue in microtransactions. It’s also one of the biggest competitive games in the world and is the marquee attraction at many e-sports events.

In 2012, Tencent made another major investment in game and technology developer Epic Games. The Chinese conglomerate plopped down $330 million for a 40 percent stake in the company.

Epic is responsible for the Gears of War franchise, but it makes a great deal of its money licensing out its Unreal graphics engine to other studios. Unreal powers a number of gaming’s biggest titles including the Mass Effect games, BioShock Infinite, and Batman: Arkham City.

Tencent clearly has a strategy that involved deep investments in all kinds of gaming.

Prior to its investment in Activision, Tencent already partnered with the publisher to produce the upcoming Call of Duty Online for the Chinese market. That game combines the gameplay, modes, and maps of previous Call of Duty games with a free-to-play, microtransaction-based business model.

“I think [Tencent’s] investment just confirms the enthusiasm we have in our partnership for Call of Duty in China,” Activision chief executive Bobby Kotick said on a conference call today with investors. “They do not have a board seat. They are a passive investor, and I think it was largely as a result of the enthusiasm for what we’re doing together.”

That might explain much of Tencent’s game-investment strategy. We reached out to the Chinese company for comment on this story and will update when we receive its comments.

Tencent has a lot of money. These investments might just serve as good bets for a company with a lot of cash and an interest in gaming. One possible alternative is that the company wants to place itself wisely in the event that China opens the ban on game consoles.

Earlier this month, the South China Morning Post reported that China is likely to lift the 13-year ban. This could open up a gigantic market for all kinds of games that are currently difficult to find in that country.