I’m incredibly sorry if the only memories you have of Shadowrun relate to the competitive shooter released on Xbox 360 in 2007. In retrospect, that game’s sole purpose was to give the world a Halo 3 demo and not reintroduce a beloved cyberpunk role-playing franchise. Thanks to the dedicated developers at Harebrained Schemes and numerous devoted fans willing to fork over nearly $2 million in Kickstarter funds, Shadowrun lives in a much more enjoyable form on PC, Mac, and soon iOS.

Shadowrun Returns is a long-overdue continuation of the classic Shadowrun pen-and-paper role-playing game, only with a 2D, isometric twist. Returns takes a great deal of influence from the Super Nintendo and Sega Genesis RPG versions but allows players to create their own adventures in the universe as well as play developer-generated scenarios.

But this return isn’t without problems. A limited budget combined with old-school design methods make Shadowrun Returns a slightly formidable experience, but it’s well worth tackling for the endless create-your-own adventure aspects hidden within. The trouble with rebooting old franchises is the nagging temptation to try to please old fans while appealing to younger audiences. Returns probably should have spent a little more time focusing on the latter, but the circumstances surrounding its Kickstarter development cycle complicate things.

Shadowrun’s premise hinges on the idea that when the Mayan calendar finally reached its end, magic mutated the world. Humans started turning into orcs, elves, dwarves, and trolls, and Native American tribes realized their cultural rituals allowed them to start summoning spirit animals. This magical catastrophe toppled governments and even led to the privatization of the police force and morgue services. It’s a clever take on a dystopian, cyberpunk future that accounts for rampant genetic mutations through magic.

You can play as any of the species, with my favorite being a character model that looks suspiciously like an Elven version of Marvel comic book character Tony Stark (aka Iron Man). I turned him into a Decker, or a streetwise hacker that can network with the “Matrix” and manipulate his way through the tech-heavy landscape. The words Decker and Matrix are likely familiar to those without much experience with the Shadowrun universe (through the Matrix movies and the game Saints Row: The Third), and that’s indicative of the franchise’s influence over modern cyberpunk tropes. Shadowrun takes a great deal of influence from authors Philip K. Dick (Do Androids Dream of Electric Sheep) and William Gibson (Neuromancer) and mixes it with a dose of fantasy lore. It’s a content-rich universe that lends itself to endless story ideas. This is a fact that Returns’ developers are very aware of. 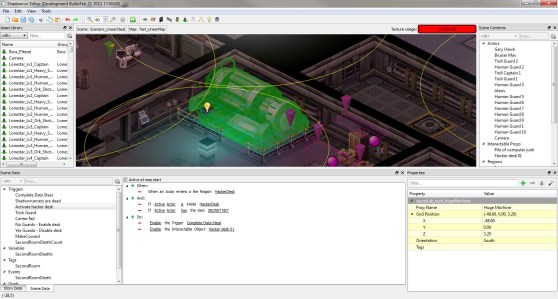 Above: This is a close-up view of positioning items in a user-created level.

One of the most ambitious goals from the Shadowrun Returns Kickstarter campaign is the incorporation of a level-creation tool. In reality, this tool is the same software the developers used to create the main Deadman’s Switch campaign, and it’s complex. While you won’t find many user-created levels at launch, the capability to build your own adventures will evolve into something much grander in the next few months. Writers from the extended Shadowrun universe will also be crafting new missions, so you’ll see more professionally constructed stories alongside player efforts.

I’m excited to see what the community will do with this feature. I can picture many tabletop Shadowrun players re-creating their favorite adventures in Returns and fans of other RPG-maker titles trying their hand at building cyberpunk tales.

The various character classes you can play and/or hire throughout Returns are unique. Different mages, fighters, and hackers use skills that can help you identify, disable, and lock on to targets in combat. Deckers, who interface with machines and computers, can view the battle from a digital perspective. Their special skills enable them to control nonplayer characters or lock on to enemies to increase accuracy.

Other classes summon and use elemental fighters or commune with animal spirits. Surviving difficult battles depends on the player understanding and effectively controlling each character style and knowing when to launch an all-out attack or identify the most effective cover in the area. Battles work a lot like XCOM or other turn-based strategy RPGs. You will move each party member individually, giving you a chance to play around with skills the main character might not have. 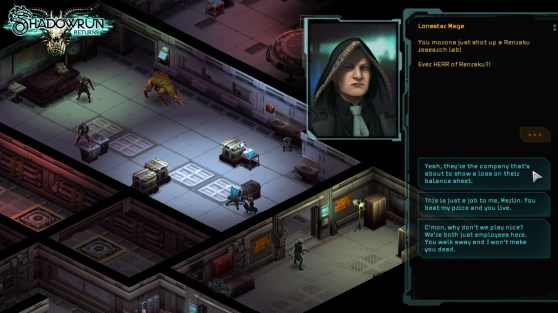 Shadowrun Returns clearly draws influence from an old set of RPG mechanics and rules, and that nostalgia sometimes presents itself in unappealing ways. Early on in your adventure, you’ll find yourself thrown into a simple battle to familiarize you with the combat system. But before you can proceed, you’ll need to click through a massive info dump covering battle steps and skill progression.

This is an old and inelegant way to show the nuts and bolts of a game — one you’ll be tempted to either scan through quickly or completely disregard. I admit that I’m spoiled by gradual tutorials in many modern games, but I feel that is one of the best changes the RPG genre ever adopted. That first battle should have taken time to explain game mechanics as you used them rather than hoping you’ll pay attention to walls of text before making your first move.

Returns’ problem with information overload continues when you start talking to nonplayer characters and accepting quests. Conversations are branching trees built upon your dialogue and etiquette skill choices. If you didn’t pay attention to that early briefing (as I did with my first character), you’ll find you’re not an effective communicator.

Character stats have a direct impact on how well you do in conversation. What I didn’t glean from the tutorial was that the karma points I earned through completing objectives were actually what I needed to dump into my stats. I only figured this out when I reached a door I couldn’t open without using Charisma to convince a hobo to let me through. Obviously, I eventually solved it, but until that point, I was missing out on a lot of customization simply because I felt overwhelmed by the introduction.

I don’t believe games require a lot of hand-holding, but it’s difficult for many people to commit massive chucks of information to memory in one go. Have you ever tried to cram for a final exam the night before the test when you haven’t read all semester? It’s like that, only you will eventually recover and not fail Biology.

Developer Harebrained Schemes is open about the ongoing effort to improve Shadowrun Returns, and from the time I first got my review copy to the time you’re reading this, many early issues have already been ironed out. Later fixes that might bug early players concern overlapping dialog boxes and occasional glitches in NPC events.

One notable problem I faced was during an early mission in Deadman’s Switch. A Lone Star officer I just bribed away from his post refused to budge no matter how many times I tried to speak with him again, leave the area, or talk to other characters. I eventually had to restart to progress the story. Problems like this are still being addressed.

Just be patient if you pick up Shadowrun on day one. It will get better, and a lot has changed already. 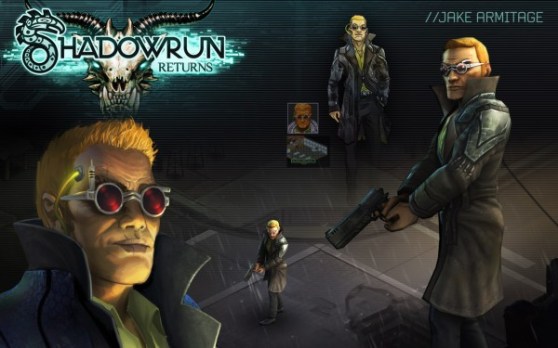 While I think the level creator is an intriguing addition to Shadowrun Returns, it suffers from the same information overload from the beginning of the player campaign. One look at the bare-bones interface and you’ll likely not know where to start. That’s because it is a development tool, not one of the whimsical “level creators” you see in Halo, LittleBigPlanet, or even RPG Maker. Here, you have the power to craft a story from the ground up without feeling limited by preset controls.

You might not enjoy this because it doesn’t coddle you, but it does have a silver lining: Learning to craft a story through basic windows and check boxes is an invaluable tool for aspiring game developers. If you can get a grip on this, you’re one step closer to maybe making games on your own.

I did find this guide to building worlds inside Shadowrun Returns that you might find useful if you want to tackle making your own story.

Shadowrun Returns stumbles a bit in its effort to re-create on the PC the isometric RPG world gamers fell in love with on classic consoles, but it redeems itself by providing players with a seemingly infinite toolbox to craft their own adventures. Deadman’s Switch, Return’s campaign, is a semi-Bladerunner, vaguely Repo: The Genetic Opera spin on the existing Shadowrun universe and does a great deal to reintroduce players to a once-familiar world. The developer’s focus on appeasing longtime fans with classic pen-and-paper mechanics implemented in an interactive way is sometimes frustrating, but learning how to play and create in Shadowrun Returns brings with it a sense of accomplishment.

Shadowrun Returns is by far the best title in the franchise since the 16-bit era. We can all forget about that competitive shooter now.

Shadowrun Returns is a PC, iOS, and Mac game that released July 25, 2013. Harebrained Schemes provided GamesBeat with a Steam code for this review.