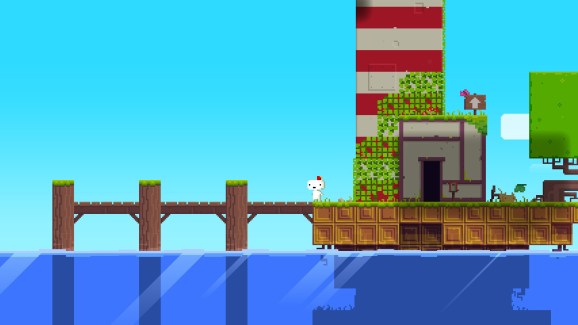 Phil Fish's puzzle-platformer Fez, which debuted on Xbox 360 and later came to PC.

“This is isn’t [sic] the result of any one thing but the end of a long, bloody campaign,” he wrote in a blog post today.

Fish decided to axe Fez II today after games journalist Marcus Beer lobbed harsh insults at Fish and fellow indie developer Jonathan Blow (the maker of Braid) in the first few minutes of the newest episode of GameTrailers’ “Invisible Walls” podcast. Beer criticized the two for refusing to comment on Game Informer’s and other outlets’ reports about Microsoft’s latest reversal: its decision to allow indie developers to self-publish on its upcoming console, the Xbox One.

Beer said that relations with press is a “two-way street” and to receive future coverage, Fish and Blow (or “BlowFish,” as he dubbed them) need to provide quotes because they’re “giants in the indie scene.” He called them both “tosspots” and “hipsters,” among other names, but he aimed most of his attacks at Fish.

Fish responded to Beer (@AnnoyedGamer on Twitter) in a series of tweets and demanded a public apology on video. He expressed frustration with the industry and then announced Fez II’s cancellation, adding that he was doing it “to get out of games” and to avoid continued “abuse.”