Call of Duty: Ghosts leads the pack in preorder demand for fall games, based on a new report from analyst firm Cowen & Co.

The 2013 Cowen Video Game Odometer shows that Activision Blizzard’s latest Call of Duty, which debuts in November (that’s just 15 weeks from now). But the inaugural version of the odometer gave Call of Duty: Ghosts a score of 73, which means it is on track to sell lower than the 100 score for last year’s Call of Duty: Black Ops II title, which sold $1 billion in 15 days.

Cowen, a Wall Street equity research firm, said the metric is designed to give insight into video game sales a few months ahead of time. The odometer is based on a statistical analysis of actual NPD sales data and Amazon.com best-seller information from past years, and the company believes it has been about 96 percent to 97 percent accurate in the past two years. The metric receives updates every couple of weeks as the holiday season approaches. Cowen has been measuring the data every week since the E3 trade show in June. The company notes that we are still “very early in the preorder cycle for most of the games we are tracking.”

Call of Duty: Ghosts is tracking ahead of Call of Duty: Modern Warfare 3 from two years ago. EA’s Battlefield 4 is No. 4, and it is tracking ahead of Battlefield 3. Watch Dogs from Ubisoft, which is about 17 weeks from launch, is showing strongly at No. 2 with a 69.6 score, while Grand Theft Auto V from Take-Two Interactive is ranked No. 3 at 58.4, about eight weeks from launch. But Cowen acknowledges that it has missed some of the preorders, since GTA V’s sales started in November 2012, and it only began tracking preorders in June. 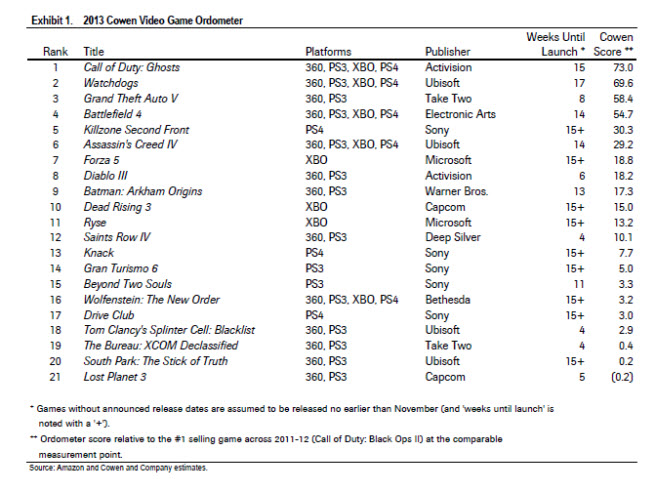