GamesBeat: How did you start getting some buy-in from other people?

Luckey: It was just me for the longest time. My goal wasn’t necessarily to get buy-in. After building something I thought was really nice, I decided I was going to put the Rift on Kickstarter as a kit, basically. You’d have to put it together. Everyone would get money together. We’d group order enough parts for 200 of them, so it would be a lot cheaper, and we could all build something that had the same specs and a bunch of VR nerds could all mess around with it.

It evolved a little bit before E3, when I was talking to John Carmack [the graphics wizard at id Software, maker of the Doom series]. I had given him a prototype. He told me, “There will be a lot of developers that want to buy one of these things and they don’t have the skills to put one of them together.” Then Carmack showed it at E3 with DOOM 3, and it started getting a huge amount of attention. When John Carmack says, “I think this is the future of gaming,” it gets a lot of attention. That was what helped me get buy-in the most, the fact that Carmack showed it to so many people in the press and the industry. 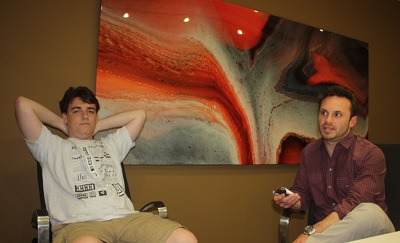 Above: Palmer Luckey and Brendan Iribe of Oculus VR

GamesBeat: At what point did you do the Kickstarter?

Luckey: John showed it off at E3 in June. He talked to some media about how I was going to be doing a Kickstarter. My plan was to launch the Kickstarter some time in mid-to-late June. We ended up delaying it so we could spend some time making it not terrible. This was 2012, last year. We launched the Kickstarter August 1, less than two months after E3.

Iribe: We got hooked up with Palmer almost right after E3, within a few weeks. I got a call from a friend who’s known Palmer in the VR space, and they said, “You need to meet this fellow. He’s doing this really cool VR thing.” When I heard that, I said, “Well, VR’s never worked.” [laughs] He said, “No, trust me. He’s working with Carmack. Carmack showed it at E3. Just Google it.” I had heard something about it, and when I looked it up and saw all of the incredible press that it got, it was one of those moments where you think, “I’d hate to be the guy who had the opportunity to see it and then passed, and it turned out to be something great.”

That’s when I got Mike and Nate together – we had all worked together at Scaleform, and then we were at Gaikai at the time – and said, “Let’s go see this VR thing.” We met Palmer and saw the demo in a meeting room in a Long Beach hotel. Right away, the first time–I still have pictures of it. A lot of people say this, that they always remember the first time they tried the Rift. It has such an impact on you. Certainly I’ll remember it, the feeling when we first looked through the experience. It was just incredible. Right away, the hair on the back of my neck stood up. It worked well enough to be something real.

GamesBeat: You helped refine the pitch?

Iribe: Palmer had already named it Oculus, the Rift, and he had the idea for a Kickstarter, but instead of a shaky-cam one-man Kickstarter, if we got together and put some funding behind it–Mike and I agreed on the spot that we’d put some money into it to make the Kickstarter more professional. We got some people to help film it and do some graphics and create more of an exciting story behind it. We also changed the strategy from kits to premade dev units, because we’d already started taking bets internally – “How many units could we really sell? What’s the potential here?” The feeling was, with Carmack and Valve supporting the project, with Cliff at Epic and David Helgason at Unity, with enough of these big names who’d all seen the demo and said, “This is great,” it would probably get a lot of attention. We needed to be ready to have this go out to a lot of people. So we focused more on dev kits that would be the precursor to a consumer version, instead of a do-it-yourself product that was just for hackers and enthusiasts. 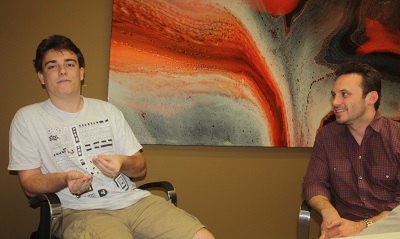 Above: Palmer Luckey and Brenda Iribe of Oculus VR

GamesBeat: And that was the point where you formed a real company?

GamesBeat: Were you already going into that with a lot of attention, or did something happen in the course of it?

Luckey: There was a really small amount of attention beforehand, these few hundred people that had been planning on buying the kits. As soon as it launched, though, it got covered by a ton of media. That brought a ton of people in.

Iribe: If you have a Kickstarter video with Gabe Newell and Michael Abrash and Cliff Bleszinski and David Helgason and John Carmack all saying, “You should support this Kickstarter too” it really works. You’re going to get some coverage, most likely.

GamesBeat: There was also this hunger in gaming, I think, to have something new come along. The consoles were in their seventh year.

Luckey: That’s one reason the Ouya did so well, I think. It launched on Kickstarter around the same time. It’s another idea that was really different from something out there right now.