GamesBeat: Right after the Kickstarter closed, what became the most real possibility for you guys? What did you realize you had?

Luckey: We had an obligation to fulfill 7,400 orders for developer kits, which was an awful lot. More than any of us expected. There was still a lot of ongoing demand beyond just that, too. People would e-mail us. “I missed your Kickstarter! I really want one!” So how do we continue to let people purchase developer kits and get these things into their hands as fast as possible?

Iribe: We had a super short timeline. We were hoping to have them made and shipped within four months, but we got so many orders that it was really hard to do. It’s much easier to do when you expect to sell a few hundred kits and raise maybe $250K. When you raise 10 times that much—We beat our goal by like 940 percent.

GamesBeat: What’s the most expensive thing in this whole setup? I guess it’s the screen, right?

Luckey: Yes. After that, it’s the related drive hardware, and then the sensor. A lot of time, effort, and parts go into the sensor.

Iribe: And the headset itself, all the plastic that goes into it. The form factor there.

Luckey: The thing about the plastic is that it’s not necessarily the most expensive part, but it takes the longest time. It takes a long time to make plastic molds. You can’t just say, “Oh, we’ll go buy those parts and it’ll work.” You have to tool these molds. They cut them out a bit at a time and it takes weeks or months to do it.

GamesBeat: You pushed your date back to get those?

Iribe: Yeah, to get that volume done. There were also some key decisions to make. It wasn’t clear in the very beginning if we were going to make the motion sensor ourselves, or buy a sensor off the shelf. If we’d bought the off-the-shelf sensor, it could have helped accelerate things, but we saw a number of shortcomings to that, and we saw a number of opportunities to make a better experience if we built our own sensor. We had control over the code and the firmware and the whole thing. We got very lucky, finding Nirav Patel. Just after the Kickstarter ended, Nirav jumped on board.

Luckey: Like, the ultimate VR motion sensor. Rather than just something built for phones or remotes, he was designing a sensor from the ground up for virtual reality.

GamesBeat: The Kickstarter seems to have gotten you into almost liveblogging this. You’re telling people, transparently, what’s going on.

Luckey: That was kind of always the plan.

Iribe: It was always Palmer’s plan. [laughs] We come from the game technology market, where we weren’t in an openly-blogging kind of place. We were creating proprietary technology. Palmer was very much about this forum and openly talking about it. When we got together, Palmer made it very clear that that was important to the project.

Luckey: I’d always done that, even before VR. Before I got into VR, I used to run an electronics enthusiast community called Mod Retro. I posted tons of guides, all my projects, how to do things. Going into VR, I did the same thing. “Here’s my project. Here’s how I did it. Here’s all the parts I used. Here’s some of the difficulties.” I did that for years. When we did the Kickstarter, I wanted to keep doing that same thing, sharing what we’re doing and how we do it.

GamesBeat: There’s value in how it comes back to help you, it seems. You learn from other people.

Luckey: It’s also a good hiring tool. If you’re putting what you’re doing out there—

Iribe: That might be the best part of it so far.

Luckey: They see what you’re doing, especially people who say, “Wow, they’re actually doing things right.” You don’t have to wait until you ship a project for them to see the cool stuff you’re working on. You say, “This is what we’re working on. These are the cool problems. We’re looking for people to solve these problems.” All the time, people say, “Hey, I saw your blog post about this. I’m an ace in this space. I think I can help with this.” We never would have heard from that good of a person if we weren’t putting all the problems we have out there.

GamesBeat: Do you think this open style is also helping you get this out faster?

Luckey: I think developers are a lot more excited, because they get to see—It’s not like we release something and there’s no news for a year. They get to see that we’re actively working on something. That’s important for building developer confidence. They can see we’re moving forward and they trust we’re going to solve our problems. We showed off the HD prototype at E3. We’ve been talking about it a lot. It’s good for them to be able to see that progress. “Okay, I believe these people are solving their problems.” 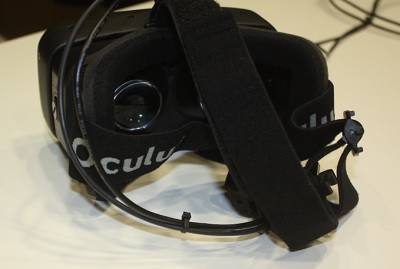 GamesBeat: I’ve seen a succession of demos — Epic’s Citadel at [the Consumer Electronics Show], and Hawken at [the Game Developers Conference]. But you’re progressively improving these?

Luckey: Yeah. And not just the software. The hardware is improving too.

Iribe: Each one of those iterations has tweaked components in it. Of course the HD one has an HD screen in it, but the motion chip also got better. In the very beginning, it wasn’t our own motion chip. During the Kickstarter days and at a lot of those events, we were showing a different motion sensor. Then switched over to use ours and perfect it. It’s continued to get better. The algorithms, the software in it – things like predictive tracking, where we’re predicting where you’re going to be to reduce the latency. We just did a big blog about that. That has gotten a lot better over the last year. In the beginning, we didn’t really have any predictive tracking, but it quickly got added and got better. It makes a big difference.

GamesBeat: The developers and the hobbyists seem to be the ones that are excited about the pre-HD version. The E3 HD version seems like the one that could get consumers excited.

Iribe: That’s one of the components that it needs to have. There are still a few other components to it that we haven’t openly talked about yet, that we’re working on internally. We’re just not ready, at a prototype level, to talk about them yet, but internally we have a lot of stuff working. That will tie it together. We’ve been open about that those key things are, whether it’s positional tracking or a VR input. This is VR vision right now, but what is VR input? We’re looking at trying to solve a few of those pieces.

When that comes together, we’ll be able to get consumers excited. The experience will feel very comfortable. There will be enough content out there that there’s something to play, as opposed to just a demo from Oculus. You pair that content with the technology wrapped up in a consumer-ready experience and it should be pretty awesome.