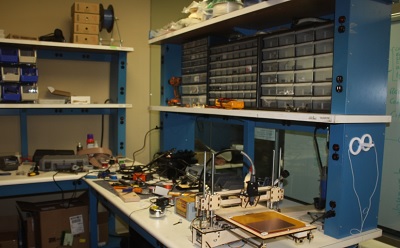 Above: A workbench at Oculus VR

GamesBeat: How soon do you sense this coming now, as far as being able to get something out to consumers and to have games from developers?

Iribe: That’s the big question. We’re still not at a place where we can announce a consumer date. We have ideas and goals in mind, but we want to set expectations right. We’ve tried to be pretty vocal about this. We want to get it right. We’ve got one shot at it, especially with the consumer market. If you’re going to put a VR experience out there again, this time it better work, so let’s make it as good as we can.

Now, I would say, we’re getting pretty close, especially with Valve’s help. We do feel like we know what consumer V1 could look like. It’s a matter of, how do we finalize all of those parts and make them economical and manufacture them? How do we pull all that into a consumer product? Hardware is hard. It’s still a challenge. It’s going to take some time to get it right. It’s not many years away, but it’s more than a few months away.

GamesBeat: The motion sickness part, do you feel like you’ve got that under control?

Iribe: Palmer can’t seem to get sick to save his life. I’m the most sensitive guy in the office, which tends to work out well. If one of the upper bosses is one of the most sensitive, we have to get it right. It’s going to be a combination of us improving the tech – it can get better. Right now it has orientation only. When you add positional tracking, it does tie it together. In the game, you’re trying to simulate where your eyeballs are. You want that to be as close to where your real eyeballs are as possible.

Luckey: That’s a hardware thing. You want the virtual experience to match up to what the real-life experience would be as closely as possible. Any kind of disparity between the two is potentially going to make people feel disoriented.

On the other hand, there are some things that make people sick in real life, and they’re not going to stop making people sick just because they’re in the virtual world instead. Developers have to be careful. One common thing you’re seeing in games is these cinematic sequences where they take control of the camera and move it all over the place. People don’t handle that real well. They wouldn’t handle it well in real life either. If you do it in VR, it makes people feel bad really fast. You have to be aware of it when you’re developing VR content, what the limitations are when you put someone in a virtual environment. 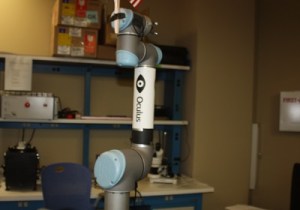 Iribe: Made-for-VR content is what’s going to be important.

GamesBeat: With your GDC demos, I played Hawken just fine. I could jump around and all that.

Iribe: You were in a cockpit there. You had a point of reference.

GamesBeat: The car racing demo made me woozy. I don’t know what that means, though.

Luckey: The car demo was just really poorly done. The physics were terrible. The control was terrible. Everything about it was pretty hokey.

GamesBeat: That seems to matter. The content really has to suit the technology.

Iribe: Your brain wants things correct. You really do need things to add up correctly. Then your brain says, “I’m gonna be okay with this for now.”

GamesBeat: So this is not the type of thing where you can just take the game and marry it to the hardware.

Luckey: Not instantly. You could potentially take a game and adapt it to the hardware, but it’s not just going to be a straight-up, “Oh, you can look around in the game now. All done.”

Iribe: The most successful experiences are going to be made for VR. That’s a reality. We’re already seeing that with things like EVR. When you try EVR, or even Hawken, it moves slow enough. It has the right pace and the cockpit. It really starts to feel much better inside. EVR is that much better. They’ve put thousands of people through the demos at Fanfest and E3. They’re in there for 10 or 20 minutes and people aren’t complaining. People are enjoying it. It’s definitely possible. It just takes custom content.