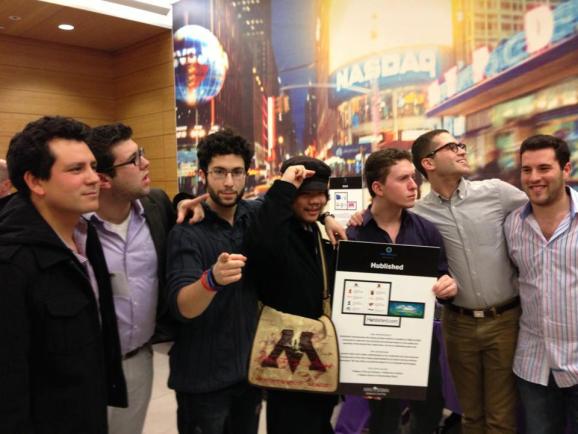 I’ve never said the word webinar as many times in a single day as I did when I talked with the folks from Hublished. And I’ve never imagined anybody, let alone a team of college students, could be so obsessed with them.

New York City-based Hublished sees a big business in webinars — live web conference-based seminars typically used for professional development. Even though webinars are immensely useful for learning about new topics and proving your company’s expertise in a field, they’re usually difficult to access (often buried deep within a company’s website) and aren’t very useful to companies once they’re over.

Hublished believes it has a solution for the fragmented content marketing world, which also includes whitepapers and research reports. Today Hublished is launching a content discovery platform that lets companies organize their webinars in a single place, integrate social features to spur on conversation with attendees, and offers companies analytics to see just how well their content performed.

Think of it like a Netflix for webinars and whitepapers — instead of visiting company sites one-by-one, you’ll have a smorgasbord of content to consume. That means there’s a higher chance your content will get discovered, and there’s less headache for someone looking for relevant training material.

“Are we sexy? No. But I think it’s a lot sexier than having webinars and ebooks in your inbox ,” said Nis Frome, Hublished’s co-founder and chief operating officer, in an interview with VentureBeat.

Hublished works with all existing webinar platforms, so companies don’t have to change their existing process. The company has already partnered with Fish & Richardson, Rutgers, Rally Point Webinars, Pam Ann Marketing, Speek, and other content publishers. It currently has around 700 people on a wait list to try the platform.

Frome and the other members of the Hublished team, Ben Borodach, Ryan Kuhel, and Yair Aviner, grew up together in New Jersey and first got their taste of entrepreneurialism when they started a web design firm in high school. Now every member of the team is managing a full college course load as they try to get Hublished off the ground.

Hublished ended up winning NYU professor Lawrence Lenihan’s salary ($12.500) as part of his “Ready, FIRE! Aim” entrepreneurship course last month, and the team also managed to raise $75,000 from family and friends within 12 hours. Overall, Hublished has raised around $160,000. The company has also been accepted into NYC SeedStart accelerator’s current class.

As we ended our interview, it felt clear to me that Hublished wasn’t just trying to make a buck from content marketing (the company doesn’t yet have a business plan in place) — it’s more focused on solving the fragmentation problem for social good.

“If webinars are the new advertising I think the world will be a much better place,” Frome said.