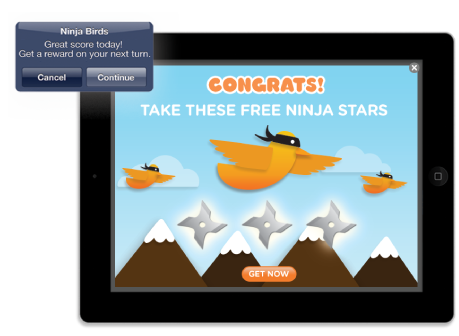 Mobile gamers don’t always have the best attention span. Players often leave behind their favorite games for something new and shiny. To help developers wrangle players back, the user-engagement specialists at PlayHaven are introducing a new product called PlayHaven Push Notifications.

Developers looking to retain players can use PlayHaven Push Notifications to create targeted marketing campaigns that push out to the notification bar in smartphone operating systems. This means players don’t even need to open the game to see a special deal on in-game items or a double experience-point weekend.

“We built PlayHaven to give every mobile game developer access to flexible, affordable, and intelligent tools needed to build a successful business,” PlayHaven chief executive Andy Yang said in a statement. “With the addition of push notifications, PlayHaven is now the first end-to-end solution on the market that gives developers the power to acquire, engage, and monetize players whether they are in or out of the game.”

PlayHaven Push Notifications is currently in beta testing. Developers can try it out for free to see what works and what doesn’t. Once PlayHaven’s new tool leaves beta, the user-retention company promises an “affordable pricing structure.”

The user-acquisition and revenue-optimization field is crowded. Companies like Chartboost, Tapjoy, and Fiksu are constantly improving and offering new technologies to developers. PlayHaven plans to use this notification solution as a differentiator when pitching its services to game makers.

Of course, the push-notification method is a risky way to engage users. It can remind some users about a game they have installed, but it could also alienate some players who feel that using the notification bar as a marketing weapon is intrusive.