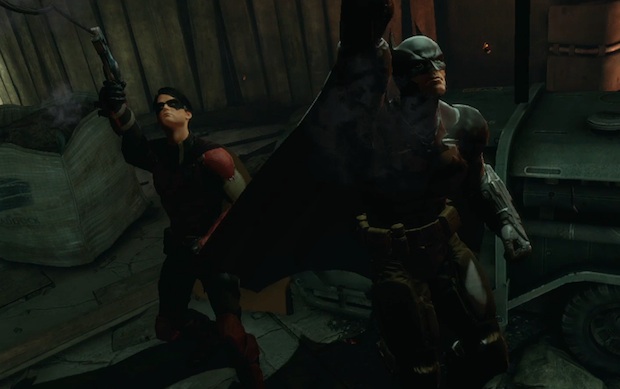 Above: Batman and Robin fleeing the scene with their grappling hooks.

Fighting for the cowl

The greatest challenge when playing as Batman or Robin is showing restraint. They’re the only ones who can take advantage of a level’s verticality, where they can perch on ledges and light fixtures or swoop to the ground and find a hiding place within a series of interconnected vents. They have gadgets that can disrupt the enemies’ vision goggles (smoke bombs), stun them when they’re not looking (batarangs), and slow down a control point’s progress (scrambler). With all these benefits, it’s tempting to go ahead and attack the first thug you see. But that’s not always the smartest choice.

Any gang member can take out the heroes with only a few shots, so if you spend too much time fighting them mano-a-mano, or get surrounded, you’re probably going to die. Dying resets the duo’s Intimidation meter (seen as a bat symbol at the top center of the screen), which is crucial because filling it up is the only way for Batman and Robin to win the match. Stealthy takedowns — fancy combos that knock out an enemy — replenish your meter, and the more you mix it up with different moves, the better your score will be. Defeating high-value targets, like captains (players with a white star above their heads) or Joker and Bane (via multiple takedown attacks), will net more Intimidation points.

“So you can literally go from having zero on the board with a couple of minutes left and one team … if you were just careful to get two or three really good and varied takedowns on captains, you’re straight back in the game,” said Cornish. “It’s always in your interest to keep going after one gang, normally the winning gang so you help balance it and prolong the match to help you build your Intimidation.” 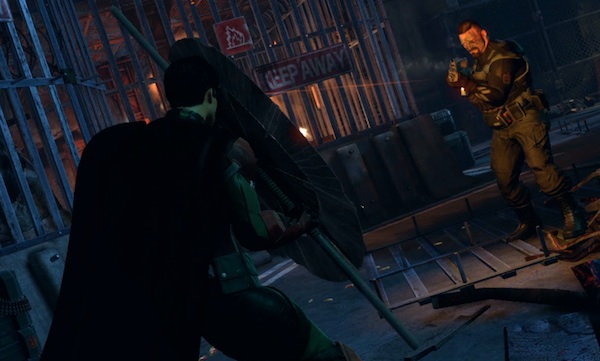 Above: Robin’s staff transforms into a bullet-deflecting shield.

Trying to find that balance is difficult. The heroes never won during our hour-long demo. And I didn’t do much better when I played as Robin: I was too hasty with my approach and too eager to catch my first prey. After I fumbled what I thought would’ve been an easy knockout, the others kept their eyes and guns on me as I made a messy retreat. Since stealth attacks only work on “unaware” gang members — you have to attack when they’re not looking — I had to hide for a few moments before I could try again.

My one shining moment as the Boy Wonder came when I kicked someone from the air, performed a brutal ground takedown, and flew back up with my grappling hook without anyone else noticing. Striking hard and fast while being as quiet as possible is the best way to play. You want the two gangs to feel paranoid at all times. Environmental effects, like pieces of cloth swaying in the wind or a group of bats suddenly bursting from a dark corner, help create this fearful atmosphere, but it’s up to you to follow through with it.