One tragic Google search can completely ruin Dragon’s Crown for you. Women characters have exaggerated, inhuman proportions, and some wear virtually no clothing at all. Indeed, if you focus all your attention on the fact that the Amazon is going on an epic quest in a thong, then it’s totally understandable that you may dismiss the rest of Dragon’s Crown as exploitative trash.

The lead artist and designer for Dragon’s Crown, developer Vanillaware’s George Kamitani, draws in an identifiable and fantastic style. The trouble with Dragon’s Crown is the emphasis placed on breast animations and grotesque proportions and how they can distract from — and even eclipse — the game you’re playing. Kamitani defends his work by citing Western genre fantasy tropes and designs that influence countless other fantasy games, movies, and books. The most difficult part of accepting Kamitani’s work is balancing his motivation with the modern push to move away from depicting women as scantily clad objects. However, it is possible to look past the art and enjoy the game it illustrates.

Dragon’s Crown is a PlayStation 3 and Vita side-scrolling brawler (a bit like Sega’s Golden Axe) with a fleshed-out story and inventory system. It turns the Golden Axe model into a semi-roguelike, meaning you’ll go through dungeons with limited equipment and the real danger that every battle could kill you. It’s a satisfying blend of nonstop baddie smashing and easily completed objectives that vary depending on the quests you’ve agreed to. Pushing past the initially off-putting art style opens up a game full of clever pop culture references and addictive dungeon-crawling. 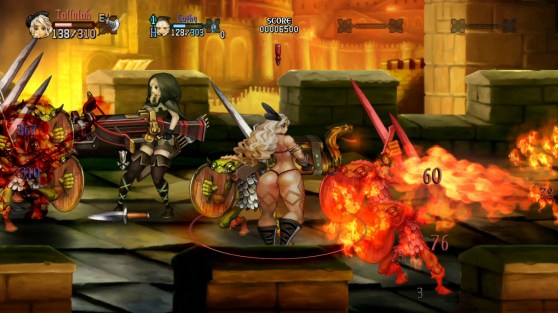 Beating up monsters is satisfying in its own way, but getting lots of money and items while doing so is even better. Everywhere you go in Dragon’s Crown is overflowing with treasure. You’ll encounter various secret doors, locked chests, and even suspicious sparkling walls that you can guide a little pointer over to reveal hidden trinkets.

When you start poking around after a fight, it’s easy to miss treasure that might have dropped from one of the many enemies you killed (or other goodies that may be lying around). Dragon’s Crown gives you a hand with treasure management with Rannie, an opportunistic rogue who rushes out to pick locks and gathers stray loot. Letting him tackle locked areas also frees you up to focus on any approaching enemies.

Calling Rannie out to help is fairly simple. As you fight, you can use the right analog stick (or the touch screen on the Vita) to control a cursor. Clicking on interactive objects sets Rannie about his task, and all you have to do is keep him from taking too much damage. Later on in Dragon’s Crown, you can also use the cursor to activate magical runes that give you stat bonuses or unlock even more treasure.

When you take on the quest to find the Dragon’s Crown and subdue an ancient, world-destroying dragon, you’re not alone. Countless heroes from all over the world have tried to fight against hordes of orcs and demons, but few survive. As you explore, you’ll stumble across grumpy piles of bones remembering their dying words. You can collect these corpses and take them back to the temple in the main hub village, where you may either revive them or bury them.

Each corpse is actually a fallen fighter resembling one of the six character classes in Dragon’s Crown. You can recruit them into your party during the offline portions of the game or let them randomly appear as you explore. Computer-controlled allies will pop in to help you fight just like online players do.

After you unlock the ability to join up with other players, you’ll find high-level bones scattered through the dungeons that can provide invaluable support when you’re walking into a difficult boss fight. It turns out that when you die in dungeons, your bones drop somewhere in the level, so the more powerful characters are just computer representations of real players who have died.

You can customize what your character says when they’re revived or join battles, but the most entertaining dialog snippets are already in Dragon’s Crown. I’ve spent the last week trying to get the They Might Be Giants song “The Statue Got Me High” out of my head after one of the corpses quoted the song’s final words. 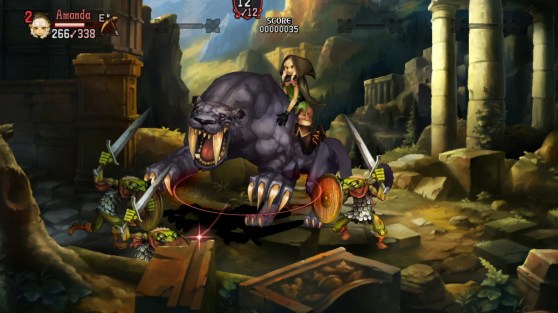 They Might Be Giants references are just the beginning for the various pop-culture trinkets scattered throughout Dragon’s Crown. As you explore, you’ll find references to Conan the Barbarian, Golden Axe, Castlevania, old Mickey Mouse cartoons, The Elder Scrolls V: Skyrim, and even Monty Python and the Holy Grail. Usually, these kind of kitschy throwbacks annoy me, but that’s because games often go out of their way to explain the jokes.

In Dragon’s Crown, you might catch the reference, or you might not, but the adventure isn’t tied to you noticing them. When you do get the joke, though, Dragon’s Crown feels much more alive.

Many games available on both the PS3 and the Vita don’t hold up across platforms. This is not the case for Dragon’s Crown. Both versions look and function beautifully, and you won’t find the shift in screen size too troubling. You can play online either way, and you can even upload your saves to a server that lets you play for a while on one platform before moving to the other.

I really enjoy the Vita version more because it’s portable and you can also tap the screen to gather goodies and unlock chests. I find that tactile element is really helpful when you need to gather money quickly or open a chest before rushing out of an area. Moving the analog stick on the PS3 controller works almost as well, but I find poking around for gold a little more satisfying when I do it manually.

The one downside to Dragon’s Crown, though, is that you will not get cross-buy support. It does support cross-play (meaning you can share saves), but you will have to buy a PS3 and a Vita version to do this. Atlus did give me access to both versions of Dragon’s Crown for this review, but you might want to choose which platform you’re more likely to play it on.

But as far as I can tell, you will be happy no matter which version you choose.