Once you play through the first nine story missions, you’ll unlock the multiplayer mode. You can team up with friends or open up your party to random people. Sometimes, independent partners can totally screw up a mission.

The latter half of Dragon’s Crown is all about defeating powerful bosses in a limited amount of time so you can gather talismans you need to fight off a dragon. Some of these fights give you the option to run away from a boss when you’re weak so you can collect more healing items, but doing this will completely ruin your completion time. It’s not wise to play with random online partners when you’re trying to defeat a boss in time to get the talisman you need to further the story. Other players can drag you through doors and away from fights easily, and particularly obnoxious ones will rush through levels before you have time to open chests or complete quest objectives.

I’m sure that if you’re playing online with people you trust, this is less problematic, but I frequently met players who just wanted to hurry me along rather than letting me complete an objective. You don’t really have a way to communicate what you’re doing other than standing still and refusing to budge, but sometimes that just isn’t enough. 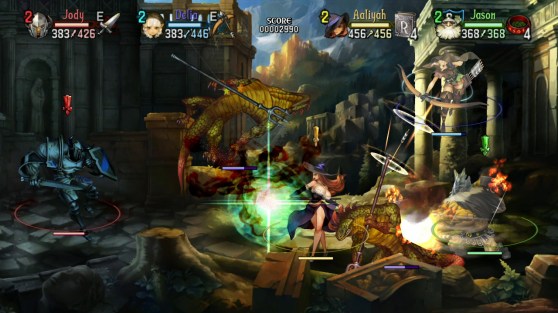 It’s totally understandable if you find the art in Dragon’s Crown offensive, repulsive, and demeaning to women. It really is, but we should also take a second to consider what games and media influenced the game. Golden Axe depicts various underclothed warrior types in fur boots and loin cloths. All the characters in the original Sega arcade game and later Genesis versions are notably without protective clothing, but they are not depicted in an overly sexual light. That wild barbarian vibe does make its way into Dragon’s Crown.

That influence is likely coming from Western genre fantasy. Snake women with breasts, overly sexualized Amazonian fighters laying waste to monsters in bikinis, and women contorting themselves in impossible ways all comes out of fantasy artist Boris Vallejo’s work. He’s not alone in depicting fantasy worlds as oily, sweaty, naked places, and it’s easy to see how those images would work their way into a semi-Western inspired “let’s go slay the dragon” adventure.

Dragon’s Crown plays like a Dungeons & Dragons inspired brawler, borrowing a great deal from fantasy stories where random (and sometimes unusual) characters team up for a common goal. Putting a tradition-driven Amazon or a sultry sorcerer next to the modestly dressed female elf archer accentuates the idea that heroes from all walks of life are coming together to save the day, regardless of their appearance and history. Every character you encounter in Dragon’s Crown is drawn in the same exaggerated style, not just the female ones. This stylistic choice doesn’t single out women for revealing/repulsive interpretations but supports the idea that the entire world is pure fantasy.

I also argue that we treat various fetishistic illustrations differently, and often without thinking. To me, I do not see much difference in Kamitani drawing to appeal to his aesthetic sense and American cartoonist Robert Crumb openly creating work that appealed to his tastes. Crumb’s work often depicts women with massive, impossibly large legs, much like the Amazon in Dragon’s Crown. Kamitani is free to design his characters according to his standards, even if they make us uncomfortable. That uncomfortable feeling might be his aim or his challenge to audiences who shy away from bare forms in various shapes and sizes.

I’m sure people find a lot to dislike in Crumb’s often disgusting work, and people are still free to remove themselves from it. But I think Crumb’s creativity outshines the sometimes abrasive way he draws, and the same is true for Kamitani. His art is beautiful, albeit sexually charged. It does not detract from the solid gameplay it illustrates and actually reaffirms the idea that the game world is nothing like our own. But you’re free to skip Dragon’s Crown because of it’s style.

It’s up to the player to decide if DC’s art is acceptable or not, but understanding possible inspirations and motivations can help you make a more reasoned decision beyond disliking Kamitani’s work solely because female characters are skimpily clothed. 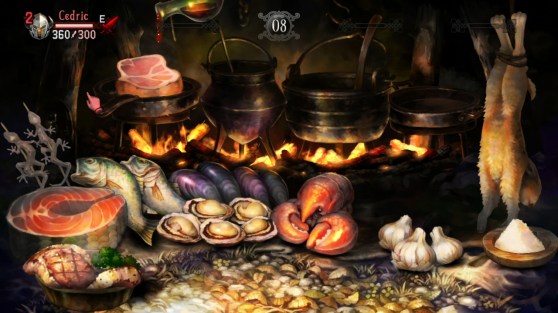 You might not realize it, but many video games strive to balance the amount of money you find with the cost of items in stores. This balance is easily disrupted by the price of services and items exceeding the rate at which you obtain money. The deeper you get into Dragon’s Crown, the more you’ll realize how delicate that balance is.

When you run out of lives in a dungeon, or your A.I. partners do, you can pay for their resurrections. Understandably, the price goes up every time you take advantage of the service, but the cost will soon outstrip the amount of gold you find. This is a clear punishment for overusing the in-mission revival feature, but it can also cost you valuable progress and A.I. companions if you come up short in the middle of a fight.

Losing yourself in the action

This complaint might be my own visual impairment, but when the battle gets rough in Dragon’s Crown, I completely lose track of where my character is on the screen. Vanillaware did include little colored arrows that correspond to your position in the party, but sometimes those indicators simply aren’t enough.

When magic starts flying, Amazons start flipping and spinning across the battlefield, and someone keeps summoning monsters to help fight, the screen quickly gets too cluttered to tell where the monsters start and the party ends. I would often find myself up in the top corner, uselessly thrashing at nothing when I thought I was deep in the colorful mess at the center of the screen. I only realized I wasn’t when the action shifted further away from me.

When I started playing Dragon’s Crown, I was using my Vita, and assumed my inability to keep track of my place was because of the screen size. Once I booted up my save on PS3, I realized that it wasn’t the screen size. No matter which platform you’re on, it is easy to zone out and hope you’re still attacking when you’re likely nowhere near the battle.

Everything in Dragon’s Crown is colorful and wonderfully animated, but I think that might be to its detriment. Maybe some actions don’t need thorough animations, like the sorceress’ breasts flailing wildly when she runs, or the elf archer constantly summersaulting as she avoids attacks. The screen is just too damn busy at times, making it difficult for you to stay focused.

Say what you want about the stylistic choices that went into art, but Dragon’s Crown’s appeal is greater than its looks. Smashing baddies, exploring dungeons, and scrounging for as much money and items as you can find is a satisfying departure from many strategy-heavy games coming out these days. Dragon’s Crown is a nostalgic return to classic side-scrolling brawlers found in arcades in the early ’90s, complete with flashing “go” arrows and food that falls out of villains and chests.

I know the art is a problem for many, and I would be lying if I said it didn’t bother me. Understanding the influences, both artistic and thematic, helps me appreciate Dragon’s Crown even though I don’t want to see undulating breasts every five seconds. I can look beyond them and lose myself in the mechanics and combat. Hopefully, you’ll give it a chance.

Dragon’s Crown is a side-scrolling brawler coming out on PlayStation 3 and Vita on Aug. 6, 2013. Publisher Atlus provided digital copies of the Vita and PS3 versions of the game for this review.