Oculus VR was readying itself for a stellar E3, the biggest video game trade show in June. The maker of virtual reality game goggles was preparing a high-definition version of its Oculus Rift system. It had also closed a $16 million round of funding that would enable it to create a consumer version of its technology. 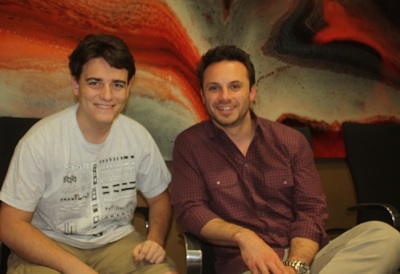 Then tragedy struck. Oculus VR co-founder Andrew Reisse was struck and killed by a car that was fleeing the police while he was in a cross walk. His death brought everything to a halt at the close-knit startup. The funding announcement was put on hold and work on the HD demo for E3 halted. The team gathered a memorial for Reisse and helped support his family. But the company rallied together and employees at Epic Games, the partner on the virtual reality project, flew out to finish the job that Reisse was leading.

The HD version of Oculus Rift walked away with numerous tech awards, in some cases gaining more recognition than the new consoles from Sony and Microsoft. The team still missed their colleague. But they were able to carry on his work and are now positioned better than ever to bring virtual reality gaming to the masses.

We talked with Oculus VR chief executive Brendan Iribe and co-founder Palmer Luckey at their headquarters in Irvine, Calif. Here is an edited transcript of part two of our conversation. (See here for part one).

GamesBeat: As you were preparing for your big moment at E3, you lost your co-founder, Andrew. I know that shook everything up. How did you guys get through that?

Iribe: Well, it was certainly a shock and pretty painful. Some of us, myself and Mike [Antonov] included, had worked with Andrew for 15 years. Pretty much ever since I began working in gaming, it’s been with Andrew. A number of guys here have worked with him for a long time. To have him pass away was a painful moment for the team. There are people here who, even if it was only for six months, still got to know him really well. It’s a startup. We’re here every day. We’re here most weekends. Andrew was part of that core team, being in here all the time. You get very close very quickly. I joked with my girlfriend that I spent more time with Andrew than I had any significant other in my life.

You get to know somebody well and you really enjoy that person. When they’re suddenly gone, it’s hard, but we huddled together as a team and supported the team, supported his parents. His parents came out here for two weeks. They spent a lot of time at the office and got to know a number of us, people they hadn’t really spent much time with in the past. You’re so busy working that you don’t get to know everybody’s family. But they really got to know more of the team here.

It was tough. It came right at that time I mentioned before, around E3. It put a lot of things in limbo. We were set to announce funding. He was in charge of Unreal Engine 4 integration, which was our showcase demo at E3. It wasn’t done yet, and immediately that was in jeopardy. We had to pause and think, “How do we move forward from here?” We were fortunate that Epic knew the priority and the pressure to get E3 ready. They were excited about it because Epic wasn’t showing anything new at E3. This was going to be the thing we did together.

When we told them, within a few hours they said, “We’ve spoken internally. We’re incredibly sorry for your loss, but we want to help honor Andrew and get it done.” They were willing to step up and do a lot of the work. They put a whole team of guys on it for about two weeks to get it ready. It came in right at the last second. That support from Epic helped the team here because we did see it get done. It wasn’t like, “Are we backing out of E3? Do we have anything to show?” It was, “Let’s get there. Let’s honor him.” They even put a plaque in the demo, which was their idea. It was awesome. 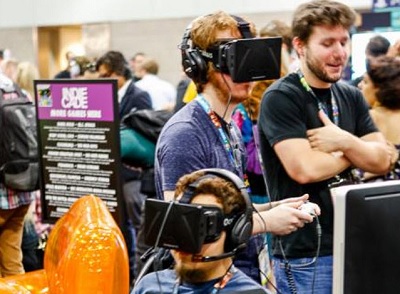 Luckey: The VR Cinema guy put a reserved seat in the game for Andrew.

Iribe: Yeah. The VR Cinema demo had a little Andrew memorial. That helped pull the team together. Since then, time heals. We all miss Andrew. He sat right in front of my office, so I would see him every day. Not seeing him there still has its effect. But the team pulled together, and we’re making good progress.

GamesBeat: You had your funding coming in at the same time?

Iribe: We did. It was right around the same few days that we were going to be internally celebrating the deal being closed and preparing the announcement. Then we suddenly got news of Andrew. That just paused everything. We’re very thankful for the investors. They understood. You hope they do, but you never know. In this case, they completely understood. We told them, “This just happened.” They said, “We’re here to support you. Let us know what we can do. Let’s wait on the announcement and do it when it’s appropriate and focus on team and family.” So we made the decision to push that until after E3.

GamesBeat: You announced it in mid-June. It seems that this is one of the things that could elevate the company into a much bigger competitor — a more realistic enterprise. It’s not a science project anymore.

Iribe: We have the capital to make it something very real now. With or without further revenue, we can get to the consumer market. The good news is, we actually are continuing to sell so many dev kits that we’re not spending that Series A yet. Now, we have some plans on what we can do with it, mainly around hiring. If you look at our career posting page, we have I think 30 or more positions there now — engineering or developer relations or support. That’s the big focus. Let’s build up an incredibly smart team. We’re trying to hire the best people we can find. I’ve never worked in a company where we’ve had 20 developers, and five of them had PhDs. Not to say the everybody needs PhDs, but it’s a really smart group of folks.

Luckey: There are people who would love to work here, but it’s harder for them to make the jump. Like you said, it makes it so this is not a science project. There are people who can jump from where they are now, if they’re going to a real company that’s going to be around for a while. This is as opposed to, “Hey, want to leave your stable job and come to this thing that might not be around in six months?”