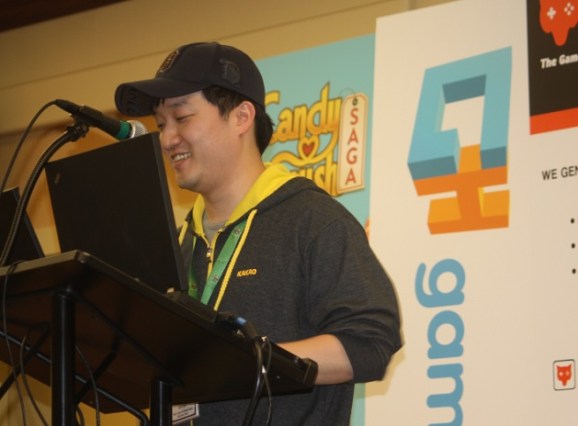 SAN FRANCISCO — Just a year ago, South Korea’s Kakao Talk mobile-messaging network launched its game platform, and now it has become the “new El Dorado of games,” according to Eric Choi of Kakao.

Choi said in a talk at the Casual Connect game conference today that revenues in the South Korean game market have tripled from $300 million to more than $1.1 billion in a single year thanks to the growth of Kakao. Choi is the team leader for the Global Game Team at Kakao Talk.

As it approaches the end of its first year, South Korea’s Kakao game platform has become a mobile game juggernaut with 30 million players. The platform is part of the 100-million-user strong Kakao Talk mobile-messaging network, which is replacing text messaging. The network has grown fast because it is built to reinforce the viral sharing of content among friends.

“I can say it has been a roller-coaster ride,” Choi said. “It has sparked a revolution in Korea’s mobile game market.”

Six out of 10 top-grossing games on Kakao were developed by small or medium-sized developers.

Kakao Corporation is the owner of the Kakao Talk, a mobile-messaging application and global mobile-social platform based in South Korea. KakaoTalk’s 100 million users send as many as 5.2 billion messages a day in the form of text, photos, video, and voice.

“This allowed Kakao Talk to grow from a daily app to an hourly app,” Choi said.

Kakao is now available in 12 languages in 200 countries. In South Korea, the Google Play store is 10 times bigger than Apple. And all top 10 grossing games in South Korea are Kakao games. The platform is diversifying, with everything from cute casual games to hardcore titles.

With Kakao Talk, users can send invitations to their friends via the mobile messaging network. Friends can click on those invitations by tapping on the touchscreen and it takes them directly into a game.

“It works well for getting new users into a game’s initial stage,” Choi said.

Many single-player games have incentivized invitations, where users can send invitations in exchange for in-game rewards. You can nudge inactive friends. That has resulted in game spam, but Choi said the company recently put limits on the number of messages that users could send in a day related to their games. He said that has not hurt game installations.

Kakao curates which games get onto its network. But Choi said the process is fairly open. The company does not accept 18-or-older rated games or gambling games.

Choi said it is important for developers to concentrate their marketing on the first week of launch. But he said companies should not go “over the top in their marketing.”