If I were to only judge a game by how much I want to keep playing it, then Pikmin 3 is one of the best games I played so far this year.

After watching the credits roll, I checked my save file and couldn’t believe that I had spent 17 hours in Pikmin 3. It didn’t feel that long. My time with it passed by in a blur of joyful exploration and intense fights.

Pikmin 3 is the latest entry in Nintendo’s real-time action-strategy franchise. It has players controlling a group of interplanetary travelers that are looking to harvest fruit for their home planet. The player, through those characters, can utilize a horde of plant-like animals, called Pikmin, to explore the world, fight off aggressive creatures, and retrieve the delicious fruit.

Nintendo’s habit of over-explaining everything and some stupid Pikmin A.I. causes some frustration, but this is still my favorite Pikmin yet. It’s also the best game on the Wii U.

Pikmin 3 is still a Pikmin game. Players that enjoyed either of the previous Pikmins will find everything they loved has returned.

Pikmin 3 still primarily about building up an army of Pikmin, gathering up resources, exploring dangerous parts of the world, and solving puzzles. All of that just works.

Pikmin 3 adds a bit of complexity by adding a third playable character. This means that players can have three teams of Pikmin running around performing tasks. This seems like too much, but it never forces you into situations where you absolutely have to use three squads, and it does make some situations easier or faster.

During one boss fight, I broke off one squad of 10 Pikmin to continually work on a Spiceberry plant that gives a special spray that improves the speed and attack power of the little plant creatures. I then took my two other squads, one made up of blue Pikmin that can survive water hazards and another made up of power red and rock Pikmin, into a boss fight.

I used the blue squad to stun the boss and then switched to the attacking group to do some serious damage with the red and rock guys. I could also feel free to use my red-spicy spray since another squad was constantly, and automatically, replenishing my supply.

Pikmin 3 is overflowing with opportunities to explore and exploit the mechanics.

Pikmin 3 is the first high-definition game in the series, and it shows. The world is absolutely beautiful.

This franchise has always had nice visuals, but the upgrade to HD really makes the flora pop. It’s never felt so much like you are a tiny little space explorer running around a massive forest. 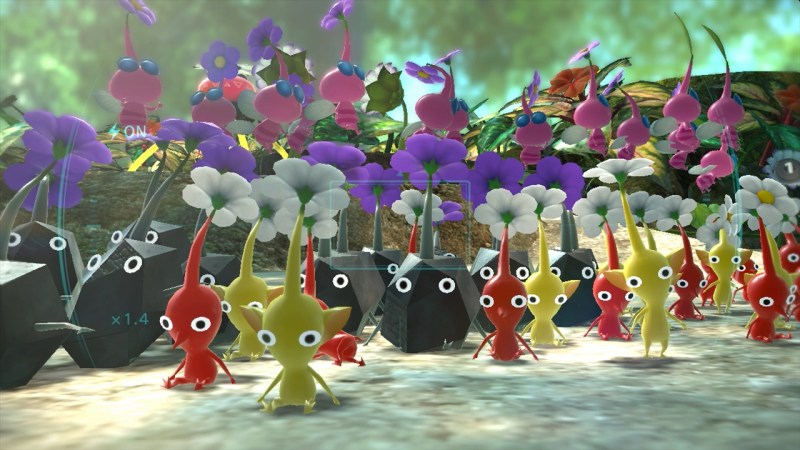 Nintendo also used a number of optical tricks that it has probably never had access to before. The background goes blurry thanks to the camera’s depth of field, and light blooms around the edges of objects. The animation and water effects are also better than ever.

The only weak point of the graphics are some occasionally muddy-looking ground textures. They aren’t as crisp or life-like as the rest of the visuals, but it’s not enough to hurt the experience.

I had played Pikmin before, but I still had to learn a few new things. Pikmin 3 does a great job of handing out lessons at a casual pace.

I always felt like I was learning new things and was never asked to do something beyond the scope of my capabilities. That continued all the way up until the end.

Even when Pikmin 3 takes a bit of a shift in mechanics, I felt equipped to handle the situation because the previous levels and challenges slowly acclimated me to the tools I needed.

One thing you’ll find yourself saying a lot while playing Pikmin 3 is “Yeah, I already know that.”

Nintendo constantly stops the gameplay to make players read a paragraph of text. The worst part is that the information almost always — and I mean nine out of 10 times — comes after you’ve already discovered a certain feature through the natural course of gameplay.

I once saw a mound of dirt and realized I could interact with it. I threw all of my Pikmin into it, and out of it popped a collectible data file, which is how Pikmin 3 communicates most of its lessons. The file said that all Pikmin could dig holes … which I just discovered by just by playing the game.

Pikmin 3 loves to stop gameplay to tell you what you already know or what you don’t care about. During an intense boss battle, as I’m trying to precisely maneuver and aim my Pikmin attacks, the gameplay comes to a sudden halt to talk to me about some fruit that another group of Pikmin just dropped off.

What’s worse is that at the end of each day, it again goes over the fruit you collected — and you can’t skip it.

All of this breaks the pace and gets in the way of the excellent gameplay.

Pikmin are dumb. It’s built into the fiction that they freak out if you aren’t there to guide them. That doesn’t make it any better when they get stuck on objects and get lost.

It only happens occasionally, but it’s still a problem with the design and slightly hurts the experience.

I’ve already spent a good amount of time with Pikmin 3, and I can’t wait to get back into the world and finish collecting the rest of the fruit. The gameplay is excellent, the visuals are gorgeous, and the challenges are smartly designed.

This probably still isn’t the game that will make you buy a Wii U if you don’t already have one, but if you do, then this is a must-have game.

Nintendo will release Pikmin 3 for Wii U on Aug. 4. The publisher provided a retail copy of Pikmin 3 to GamesBeat for the purposes of this review.