For the third time in a row, the U.S. government requested — and received — more user data from Twitter than all the other nations of the world combined. And that’s before you count Prism-style FISA requests from the NSA, which Twitter cannot legally disclose. 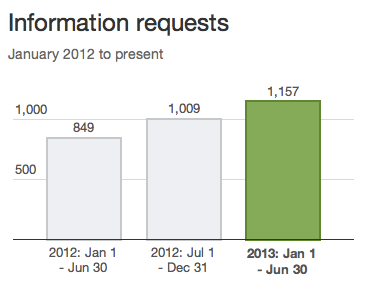 In this latest period, Twitter says that it received 1,157 requests from governments about users on the newsy social network. In just over half of those cases, 55 percent, Twitter acquiesced, providing the information, and the total number of affected Twitter users was 1,697.

That’s actually a tiny number when you put it into perspective — it’s only a small fraction of Twitter’s more than half billion users.

Most of those cases are similar to the recent situation in France, where Twitter was asked — and then compelled — by the French government to surrender account details of Twitter users who tweeted anti-Semitic comments. Why the vast majority of requests originate from the U.S. is unclear, although Twitter attributes it simply to the fact that Twitter is headquartered in the U.S.

Most data requests in the U.S. come in the form of subpoenas, at 56 percent. Another 23 percent are via search warrants, and 11 percent are court orders. Just one percent are as a result of MLAT requests from other countries — Mutual Legal Assistance Treaties.

Still open, of course, is how many FISA requests Twitter has received. 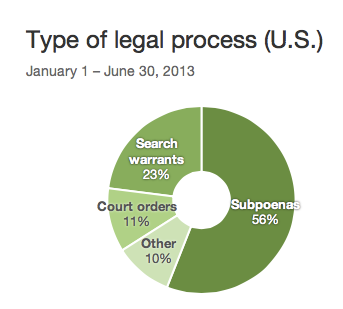 “We believe it’s important to be able to publish numbers of national security requests – including FISA disclosures – separately from non-secret requests,” Twitter’s manager of legal policy, Jeremy Kessel, posted today. “Unfortunately, we are still not able to include such metrics.”

Twitter, which has never been among the top social media and technology companies that have been named as companies that supply data to the NSA or other organs of the U.S. government, has fought hard to protect users’ privacy. And this voluntary transparency report — which Facebook has yet to really emulate — says volumes about the company’s willingness to go to bat for its users.

There are three ways Twitter fights government requests for user data, the company said. If a request does not identify a specific Twitter account, Twitter does not comply. Additionally, if the request is overly broad, Twitter “may” seek to narrow it, and finally, Twitter sometimes notifies users before releasing their data, in which case they can challenge the request. That seems rare, however: only 19 percent of U.S. data requests resulted in notification to Twitter users.

One type of request that is up considerably is content removals, which Twitter has now complied with in seven countries, compared to two last report.