As the first Motorola phone completely designed under Google (Motorola had the last wave of Droid devices in the works for a while), the Moto X has a lot to prove. Mainly, is it worth the $12.5 billion Google spent to buy Motorola more than a year ago?

In an intimate gathering with media today, Motorolo CEO Dennis Woodside and SVP of product management Rick Osterloh gave us a glimpse at the $199 Moto X and framed how the new Motorola fits inside of Google.

“We looked at the smartphone business today, phones today are really powerful — but they aren’t very smart,” said Woodside. “That’s one of the things we wanted to help solve. In particular a smartphone today requires you to turn it on, punch some numbers in, and manually operate. That shouldn’t be how it is — it should be smarter than that.”

Woodside, who was a Google executive before heading up Motorola, pointed out how the acquisition was similar to other Google acquisitions that paid off well, like KeyHole, which led to Google Earth and key features in Google Maps; and YouTube, the biggest media site on the web. Despite Motorola’s struggling revenues over the last few years, it’s clear that Google expects it to rebound in the future.

And as the the company that built the first cellphone, it would be foolish to count Motorola out entirely.

Kicking off the next smartphone era

So how does the Moto  X make the smartphone smarter? For one, it’s always listening to you, similar to Google Glass. A simple phrase (“OK, Google Now”) can launch directions, calling options, and other functionality so that you can use the phone completely hands free. Moto X learns to discern the sound of your voice, so not everyone will be able to give it commands, and it’s powered by Google’s cloud-based voice recognition engine. (It’s just one of many Google devices that are building voice profiles for you online.)

Despite the pomp around its official Moto X unveiling, much of the leaked details about the phone were indeed accurate. It’s powered by the Motorola X8 computing system (also seen in the latest Droids), which includes specific chips for language processing and sensor awareness, as well as a dual-core Snapdragon processing running at 1.7GHz. The phone will ship with 2GB RAM and 16GB of storage (with 11GB available), and it sports a 4.7-inch OLED screen with a 720p resolution. 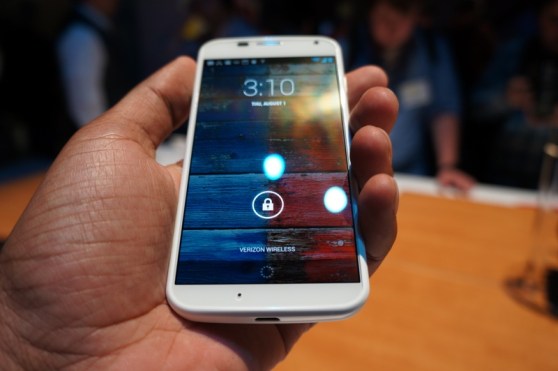 One intriguing aspect of the Moto X that wasn’t leaked online is its new camera tech. The phone sports a 10-megapixel “Clear Pixel” camera, which Osterloh notes is different than other smartphone camera sensors since it features an RGBC image sensor. “For a given scene, you can expose pics faster … our Clear Pixel camera can capture 75 percent more light in a given scene than a regular sensor,” Osterloh said.

He showed off a picture of his kids running through a water fountain — the Moto X was able to capture individual water droplets frozen in air.

You can activate the camera with two quick flicks of your wrist (Motorola calls its a screwdriver gesture), and be ready to take a photo within two seconds. The camera also features the heavily simplified interface we saw last week: You can tap anywhere on the screen to take a photo swipe up to zoom in. There aren’t any traditional camera controls.

When it’s resting, the Moto X “breathes” by showing you the time and your latest notifications every few seconds. You can tap into a notification to take a closer look, or swipe up to interact with it directly (for example, swiping directly into a text conversation).

You’ll be able to customize the Moto X to your liking at Motorola’s Moto Maker site, which offers more than 2,000 different ways to configure the phone to your liking. Motorola will also offer a wood option for the rear case (Osterloh seemed particularly proud of the fact that it’s the first company to make a wood smartphone).

“Mobility is the biggest technology trend of our generation,” Woodside said. “Fifteen percent of all web traffic is already wireless. … It’s important, the hardware is important, and great hardware makes software work better.”