You don’t often hear from tech entrepreneurs whose inspiration came from their grandmothers. But serial entrepreneur Kai Stinchcombe just launched True Link Financial to assist his grandmother, Ruth, and others like her who are the victims of online fraud.

Stinchcombe says the idea’s been brewing for several years, with solutions running through his mind after busy days at previous startups. Stinchcombe recalls how his grandmother would write four checks a day to fraudulent charities. She wanted to live on her own, so his family felt powerless to stop it.

“Then something changed, and I began to think about payment like a product,” said Stinchcombe. “Consider the check book like a car: If you have limited vision and you drive your car off the road, it will go as fast as you push the gas pedal.” 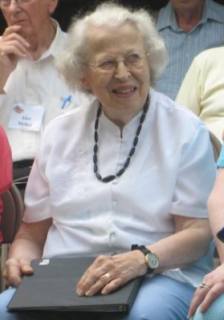 Stinchcombe’s goal is to prevent the elderly from driving off the road in the first place.

The simple solution is a preloaded Visa card ($20 for a yearly subscription) that serves to prevent fraud. The elderly can throw out their checkbooks in favor of the card and can continue to live independently.

It takes about five minutes to sign up for a card. A caregiver or elderly person can fund it from any checking account or a direct deposit from a pension.

For the most part, caregivers or family members will purchase the card. They are authorized to prevent certain types of transactions from going through the card without explicit consent. They can also set up the True Link “fraud blocker” feature to disable or limit ATM withdrawals.

It’s a much larger opportunity than Stinchcombe initially expected. He estimates that 10 million people suffer from dementia or some kind of cognitive impairment, but make decisions independently.

This group is the target market, for now.

True Link doesn’t just prevent explicit fraud– often, there are hidden fees on products that are sold online. Stinchcombe suspects that it may prove to be useful to a broader segment of the population than the elderly. 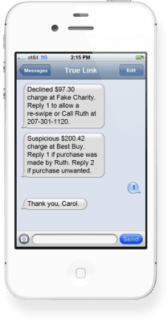 Above: If suspicious charger occur, caregivers will receive a notification via SMS or e-mail.

A bouquet of flowers may cost $20, but you might find yourself paying an additional $30 on a vase fee, postage and packaging, expedited shipping, and more. “You don’t even have to be suffering from cognitive impairment to lose track of details,” said Stinchcombe.

The card acts as a backup mechanism to prevent these kinds of accidental, inflated purchases. You could set requirements so these sorts of additional costs are flagged — and need to be approved first.

In the long run, Stinchcombe and his company will serve as vigilantes of sorts, taking steps to prevent online fraud. Stinchcombe said they are already tracking suspicious behavior on the Internet and will alert the authorities and the press. He also plans to hire more staff to go through piles of junk mail, investigating “free” trials, and clicking on banner ads to monitor and prevent scams.

True Link Financial cards are now available for anyone to purchase. Stinchcombe and his cofounder Claire McDonnell just completed a beta trial with 50 people, while they were enrolled in elite accelerator Y Combinator.

Prior to forming True Link, Stinchcombe worked as the chief technical officer of another mission-driven business, LendUp, as well as Aktana and Companion Apps. McDonnell worked at venture firm Innovation Endeavors. The founders have succeeded in raising a small seed round of financing, but are not yet ready to disclose the final sum.