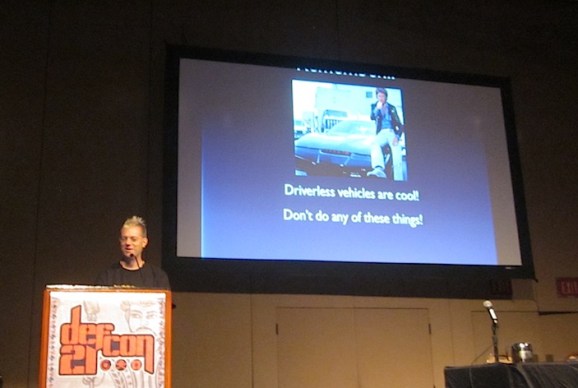 LAS VEGAS — We heard earlier this week about how it’s possible to hack into some newer cars, but one researcher has already gotten started on how to hack driverless cars — yes, those Google cars of the future.

“I’m a huge fan of unmanned vehicles. I love robots, I think they’re the future.” said a hacker who goes by the name Zoz at the Def Con hacker conference this week. “But, like everything else humans ever made, it’s going to get hacked.”

Unmanned vehicles rely on a number of sensors to be able to move without hitting anything. These include the GPS, laser range finders (LIDAR), cameras, inertial measurement units (IMU), wheel sensors, and more. But these sensors can be tricked to run your driverless car off the road, into walls, and, in the case of one van, over highway medians.

These hacks are scary when you consider how advanced Google’s driverless cars are. Many believe these are the future; that they’ll take us from place to place without our intervention. But if you can hack into the computers that exist in cars today, the extensive systems of unmanned cars will be ripe for “experimentation.”

The types of attacks that can derail the sensors vary but aren’t always very sophisticated. For example, LIDAR sensors use a rotating mirror to check for potential obstacles and weather changes in the area. It scans the area with a laser, and anything that reflects that laser is then picked up by the mirror. The sensor analyzes that data and decides what is in front of it.

You can freak the sensor out simply by kicking up a little dust. Yes, dust, smoke, and especially mist will cause the LIDAR to stop the vehicle immediately for fear of running into something. Reflective surfaces also confuse the LIDAR. They absorb the laser so it doesn’t return any information to the LIDAR’s systems. When it doesn’t receive any data, it believes nothing is there — otherwise known as a pothole. It will then swerve off course in order to avoid what it thinks is a ditch.

Zoz explained that a terrorist document advised other terrorists in the group to put reflective surfaces on their cars so as to avoid American drones.

But you can get more technical when it comes to the GPS. A couple of years ago, when Iran proudly displayed the U.S. drone it says it hacked, engineers in the country said they “spoofed” the GPS. This is the process of feeding an unmanned vehicle’s GPS systems incorrect location information, causing it to move to where it believes are the correct coordinates.