Thirteen years after the original game came out and nine years after its sequel, Sony Online Entertainment is finally unveiling details of its upcoming massively multiplayer online game, EverQuest Next. The big game has been years in the making and is widely anticipated by fans who are gathered today in Las Vegas for Sony’s annual fan appreciation event SOE Live. 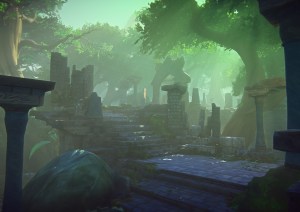 Above: An environment from EverQuest Next.

If fans like it, the game could grow from a niche title to a mass market phenomenon, much like the original groundbreaking game. It represents Sony’s bid to stay relevant as the leading company in online game worlds. It is nothing less than Sony’s stake in the ground to define the modern MMO in an age when gamers are flocking to other types of entertainment such as tablets and smartphones.

The new version will be free-to-play, where users can play for free and pay real money for virtual goods. It will be malleable, allowing fans to create their own objects that can be used inside the fantasy role-playing game. It will have upgraded 3D graphics and a physical environment that can be changed or destroyed. It will also feature dynamic events that can change the world and disrupt the normal activities of players.

“We made a decision to modernize the gameplay of MMOs,” Smedley said. “Most of them are like the old EverQuest with new coats of paint. This is a completely new kind of game.”

The original EverQuest debuted in 1999, followed by EverQuest 2 in 2004. Since that time, Sony has been figuring out what to do next. The current version of EverQuest Next has been in development since 2009, but Smedley said that the company canceled previous efforts and went back to the drawing board.

“We scrapped it twice,” he said.

Most recently, the company tore up its plans two years ago and did a big rethink of the core creative and technical aspects of the game. Finally, Smedley said, key features of the plan are ready to be shown to fans.

“With EverQuest Next, we’re going back to our roots – a space we defined with the EverQuest legacy – and ushering in a new era of MMOs: The Emergent Era,” said Smedley.  “Today, many MMOs fail because players consume content faster than developers can create it. With EverQuest Next, we’re creating a living world that players are part of and empowering them to produce new content alongside the development team. What does the future hold for EverQuest Next and Sony Online Entertainment? It’s in the players’ hands, and we like it that way.”

We got a preview of the game’s new features in a secret meeting at the Electronic Entertainment Expo (E3). The developers showed me how players could craft their own objects using in-game tools provided by Sony. Players can create everything from bricks to houses and then submit them to community. Those objects will The highest rated objects will be considered for inclusion in the Sony-created part of the game. 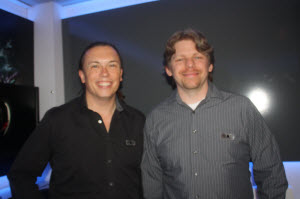 Above: Dave Georgeson and Terry Michaels of Sony Online Entertainment.

“EverQuest Next is not the continuation of a familiar story. It represents the fundamental reimagining of the characters, lore and environments of the EverQuest universe,” said Dave Georgeson (pictured on the left), Director of Development for the EverQuest Franchise, Sony Online Entertainment. “Make no mistake; while great care has been taken to respect the extraordinary influence that EverQuest has had in this industry and with our player community over the years, this is a boldly different game unlike anything that has come before.”

Smedley said the game is different from every other MMO because of advanced features. It has “multi-classing,” or the ability to explore the world with 40 distinct classes (or professions) at launch, with multi-tiered abilities and specialized weapon skills to collect and master. Players can mix and match abilities from each class in creating their own custom characters.

The destructible environments will stretch across the entire seamless game world. Players will have the ability to manipulate the environment, such as digging into the bedrock of the landscape and using combat abilities to blow huge holes in the ground. The world will extend into the heavens and deep underground in a “procedurally generated” world with real depth. That means the features of the landscape can be automatically generated based on randomized computing models. The lore will extend through 10,000 years of the fantasy realm’s history.

Players will have the ability to cause changes in the world around them in permanent and dramatic ways. Through collective efforts, players, creatures, and non-player characters will be able to build or destroy city walls, wage large-scale destructive wars, and tell epic stories that unfold over months or years.

The computer-controlled characters will have “emergent artificial intelligence,” or specific motivations and preferences that will direct their behavior in nuanced and unpredictable ways. Non-player characters will make decisions based on core values. Orcs may attack opportunistically because they want an adventurer’s gold, not just because a hero walks into an attack radius.

Each character will have a unique story, not a predetermined path. They will seek out adventure in a constantly changing “sandbox world.” The game will remember every choice and action that players make and it will deliver more chances to do the things that a player likes.

The EverQuest Next Landmark will combine tools to create things in the world with the social functions expected in a modern online game. It will feature persistent worlds that support thousands of other players and varied terrain inspired by environments of EverQuest Next. But Landmark will let anyone build structures that could be included in EverQuest Next.

“Landmark is going to be a major user-generated world,” Smedley said. “The really good stuff will be taken into the MMO proper. We are embracing the community as part of the development team.”

Players will be able to sell their own creations to other players in a marketplace. Sony will facilitate the trading and take its own cut. One of the big benefits is that players will no longer speed through all of the content created by Sony and then be left with nothing to do. They can create their own content and that will keep them busy, much like in games like Minecraft. Meanwhile, Sony will have its own staff of 75 people working on their own creations for EverQuest Next.

“It’s not like you will come in and eat everything there is to eat,” Smedley said. “Now you won’t want to leave.”

As a precursor to EverQuest Next, SOE will introduce EverQuest Next Landmark (Landmark) this winter. Essentially, Landmark will combine the powerful and intuitive building tools SOE is using to create the fully destructible world of EQN with all of the social functionality expected from a modern MMO. You don’t have to be a programmer to use the intuitive tools. Players can create their own projects quickly and collaborate with friends on massive creations. They can also claim specific areas of the Landmark world as their own. The Landmark tools are the same that Sony is using to build the world of Everquest Next. Sony will directly guide the fans on what it wants them to build.

The aim, Georgeson said in an interview with GamesBeat, is to create a place with the largest collection of fan-created objects in games today. Sony doesn’t have a release date yet, but it will release the world in stages.

“Free-to-play has come to dominate,” Smedley said. “With it, we expect to reach a larger audience.” 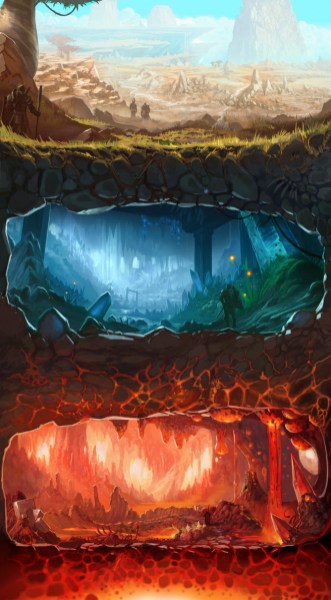 Above: EverQuest Next depth of gameplay