This week’s Casual Connect gave us a window into the state of the game industry. It looks both hopeful and scary.

The highlight of the San Francisco event was a fireside chat between journalist Jon Gaudiosi and John Riccitiello, the former chief executive of Electronic Arts. In that talk, Riccitiello made a number of sharp observations. He noted that it is hard for the mobile game companies to come up with two hits in a row or sequels that sell better than the original game. That leads him to believe that they need to build brands. 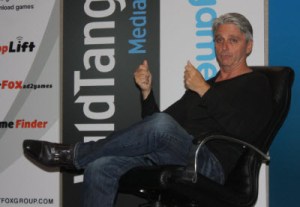 “Will Clash of Clans (from Supercell) be with us in 25 years? This is Madden’s 25th Anniversary?” he said. “Will Candy Crush [Saga] be around next summer, through the fabled IPO and still be doing a couple of million dollars a day?” He sees precious little evidence that lasting franchises are being built. Although he worked at a huge publisher, he said he doesn’t think publishing will be the same in a mobile dominated world.

He also calculates that Apple and Google have between them created about $300 billion in value since 2007 in the creation of the smartphone and tablet ecosystem with the iPhone and Android. But the app content ecosystem has created only about $20 billion to $25 billion in value. That’s a big gap, and it is akin to saying that movie theater owners create more value than movie makers. Riccitiello thinks content should be king and that smart middlemen such as monetization firms will help the content makers create $100 billion to $300 billion in value on the other side of the equation.

That is a very hopeful statement, but perhaps overly optimistic, given the challenges facing developers and publishers.

Meanwhile Kixeye chief executive Will Harbin (pictured at top) gave a comical talk (in orange pants) about how developers don’t need a game publisher to take their free-to-play games to the market.

“Don’t depend on anyone but yourself,” said Harbin, whose company makes free-to-play hardcore social games like Battle Pirates. “Take control of your own destiny.” By that, he means make great games. Learn from your players. Fail fast and iterate faster. Don’t copy. Be original and ambitious. Clive Downie, head of DeNA West, reminded us all that there are only 1,440 minutes in a day. His company’s games are played for 55 minutes on average. That’s a very large slice of entertainment time, and game developers should remember just how precious that time is. 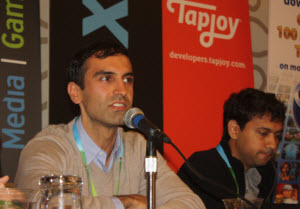 Of course, there was plenty of pessimism at the event to balance out this optimism, as I saw on my own panel on the rising costs of user acquisition. Getting new people to discover your game is a challenge when your game is one among 800,000-plus on the app store. Mobile is hard because it is fragmented and you never know how long a hit will last. Developers try to calculate the lifetime value of a user. If your paying users in a free-to-play game spend $5 over the life of a game, then you shouldn’t spend $6 acquiring those users. That’s common sense. But you never know what the lifetime value really is until it’s too late.

You have to bet ahead of time what it’s going to be, said Jong Woo, vice president of business development at King, the maker of Candy Crush Saga. Facebook announced this week that it plans to help companies deal with the rising costs by promising game startups a leg up on acquiring new users for free.

The problem is that the tools for revealing the equation to you and the actual costs for acquiring users are just too opaque. If you get a picture in your head of a day trader looking at several screens all day, that’s the right image for a user acquisition specialist, said Chris Pitz, vice president of mobile marketing and publishing at Kabam. Peter Hamilton, the CEO of HasOffers, told me at a dinner that his company has the right dashboard for the user acquisition chief to make the right decisions. But his company is a startup and it isn’t creating the $100 billion to $300 billion in content value just yet.

Tim Chang, managing director at Mayfield Fund, noted that the business has changed in the past couple of years so that developers can find alternative sources of money, from angels to Kickstarter crowdfunding, instead of taking money from venture capitalists. If you take VC money, the pressure will be high to perform and deliver an exit with big returns. Kristian Segerstrale, founder of Initial Capital, said he expects we’ll see a billion-dollar mobile game in the form of Japan’s Puzzle & Dragons (made by GungHo Entertainment), which is generating $4.9 million a day in revenues. Next year, he says, a big mobile game will likely cross $2 billion in revenues and eclipse Call of Duty sales.

Dan Fiden, a partner at Signia Venture Partners, said he is excited that it takes so little to get an indie game into a market. But he sees the costs rising. The biggest opportunity is making a $1 million to $10 million game targeted at hardcore gamers using tablets.

Greg Richardson, chief executive of Rumble Entertainment, got an investment from Asian game giant Nexon. The Corum Group’s senior analyst, Alina Soltys, believes we’ll be seeing a lot more of that type of transaction, as the big Asian companies have $30 billion in cash to invest.

Richardson said he believes he will find success in patient iteration on a series of games that will bring console-quality games to smartphones and tablets. His company has been laboring for two years to get a couple of big games just right. But Riccitiello rightly pointed out that simply beefing up the graphics without improving the gameplay for mobile devices is a recipe for repeating the failure of so many console developers, who tripled their costs with graphics-related investments without tripling their revenues.

Kyu Lee, president of Gamevil USA, noted that companies with just a small number of mobile games — Supercell, GungHo, and King — are currently beating companies such as Electronic Arts and Gree. That builds a case for focusing resources.

Eric Choi, the head of the game business at Kakao, was perhaps the biggest optimist of all. He described Kakao Talk, the mobile messaging network that has grown to 100 million users in a little more than a year, as “the new El Dorado of mobile games.” All 10 of the top 10 Google Play games in Korea are Kakao games. That’s very cool, but it means developers will have to give 30 percent of their revenues to Kakao and another 30 percent to Google or Apple. That’s a lot of people taking a piece out of the pie, and there won’t necessarily be much left for the developer. 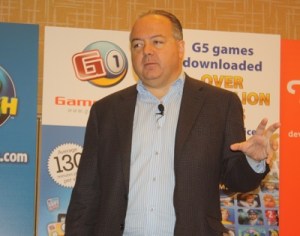 New technologies are starting to inspire game developers. Google Glass was mentioned often during the event as inspiring a new wave of augmented reality games.

The ever-brilliant Jesse Schell of Carnegie Mellon University said we have more than 4 million sensors on our bodies that can detect touch, and we are only beginning to make use of them with touchscreen technology. He thinks it’s wonderful that three-year-olds can pinch and zoom on a touchscreen, but he wants us all to remember that artists create their best work with a pencil or a paintbrush, using three fingers, rather than just a single finger.

Market researcher App Annie reported that the Google Play stoer exceeded the Apple iTunes App Store in app downloads by 10 percent in the second quarter. That was the first time that happened, but iOS still generated 2.3 times more revenue than Google Play.

And gambling turned out to be a big theme at the event. Christopher Griffin, CEO of Betable, noted that there were two casino game sessions at Casual Connect last year, and there were 23 this year. Rob Glaser, the chairman and acting CEO of RealNetworks, sees value on the edge of the game industry, at the intersection of the red-hot social casino games and real-money gambling. After all, gambling is a $400 billion business, online gambling is $35 billion, and social casino games are less than $2 billion. The potential to shift some of those revenues toward games is real, in his view.

Glaser’s firm plunked down $15.6 million to buy Slingo, the 17-year-old brand that combines bingo and slots. His GameHouse Casino Plus will also have a $100,000 monthly sweepstakes contest to give social casino gamers the thrill of winning real money while they wait for legislation to pass legalizing it in the U.S.

Zynga’s new chief executive, Don Mattrick, evidently decided it isn’t worth the wait. He’ll take Zynga’s resources and double down on the company’s core social poker franchise, rather than pursue a license for real-money gambling in the U.S. Zynga’s stock took a dive last week when it announced it would no longer pursue a license for real-money gambling in the U.S. But I think investors misinterpreted Zynga’s intentions. Zynga will still have real-money gambling games in the United Kingdom in a partnership with Bwin.party. And in other territories, it could ally itself with a company like Odobo, a white-label service that converts social casino games into real-money gambling games. In other words, Zynga isn’t spending a lot on real-money gambling now, but that doesn’t mean it can’t participate in that market in the future. Middlemen like Odobo, or perhaps Betable, might make it easy for them to cross into a new business. Bwin, as well, could be a partner for Zynga.

Online gambling consultant Melissa Blau said that land-based casinos are very interested in teaming up with social casino game makers. But she raised an interesting question: What happens if the regulators become worried about the dangers of addiction in social casino games, just as they are concerned about that in real-money gambling games?

Ed Fries, the former head of Microsoft Game Studios, closed the conference with a cute talk on predicting the future. He was inspired to think about it by looking at old Victorian postcards that featured art imagining what the world would be like in the year 2000. The postcards featured ideas like a shredder that would chop books into pieces and feed them directly into the brains of students. Fries noted that games don’t have to be as useful as other technological inventions. They just have to entertain us. And keep us from getting bored. Given all of the ideas I heard this week, I’d say we’re a long way from boredom.