The realism of video game art and movies have just about converged, and that’s one reason why French game publisher Ubisoft is jumping into film. Last fall, the company announced that it would make an Assassin’s Creed film based on its popular video game series. In partnership with New Regency, Ubisoft Motion Pictures will make the film on its own terms and bring its video game story of Assassins vs the Templars to life on the big screen. The movie is coming out on May 22, 2015. 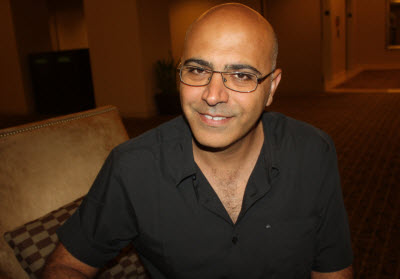 One of the people responsible for making this happen is Farchad Bidgolirad, head of research and development at Ubisoft Motion Pictures. He is on the leading edge of the tech tools used to make special effects in movies and creating characters and action video games.

I interviewed Bidgolirad at the Siggraph Business Symposium in Anaheim, Calif. Here’s a transcript of our conversation.

GamesBeat: You’re in the movies now, Ubisoft Motion Pictures. There are some things you’ve just announced there, right?

Farchad Bidgolirad: Basically, I take care of R&D. We’ve been around four years now, trying to make our own tools for the movie part. When we talked to the CEO Yves Guillemot four years ago, he explained that he wanted to have convergence – not only for tools, but also process and talent. Our aim was to have the talent from the movie part move into Ubisoft proper, and use those tools to help their processes. Ultimately, we want to help make better games. But we’re doing movies as well.

GamesBeat: What else do you plan to talk about on the panel?

Bidgolirad: We’re talking about the importance of R&D, and what that means to production. One question we’re asking is, can you get away without having R&D?

GamesBeat: There’s a lot of interesting history there. You guys make some of the best cinematics already, right? It almost seems like it should be easy. I played BioShock Infinite all the way through, and then a second time, I just went up on YouTube and watched about three hours worth of cinematics that some guy had cut together. They had a three-hour movie, essentially, all built into the game.

Bidgolirad: It’s true. There’s a lot of technology at Ubisoft, and a lot of talent, both on the creative and technical ends. Still, there’s a big difference between the process of making a movie and making a game, even the cinematic part of a game. We’re using the same tools to make assets for both games and for the movies, but the processes are very different.

With games, you’re shipping runtime, plus assets. With a movie, you have the image, and that’s all you ship. The technology part of the game is very important, with everything running in real time.

GamesBeat: Is there a reason that Ubisoft got interested in movies right now?

Bidgolirad: It’s our intellectual property. We want to use our IP, and we want to keep control over that, of course. It can help us make our IP stronger in general, including our games. That’s one reason. The other reason is that Ubisoft wanted to learn about the process of making movies – the process, the tools – to be able to do better games. It’s mutually beneficial.

GamesBeat: I look at Electronic Arts, where they’ve tried for a long time to make Battlefield and Medal of Honor more like Call of Duty, more movie-like in their storytelling. Finally, with Battlefield 4, it seems like EA has risen to the top of their game there. They seem to have gotten the narrative right. It’s the same kind of game they’ve made as before, but they’re telling it in a different way. It seems true that if you borrow the best from the movies, you can make your game much better.

Bidgolirad: Storytelling, I would say, is a newer thing in games. For a long time, I think people thought that technology made the main difference between one game and another, but in the past few years, technology has become just one difference. To make a good name, you need story, you need character. We’ve gotten quite good at it, if you look at something like Assassin’s Creed.

Now, more and more, in the movies you have touches from games coming in. Game directors and moviemakers were a completely different culture for a long time, but now you have movie directors coming in who are also gamers. Those cultures are crossing over, even in the editing part of things. Directors are using a different language, because they’ve been influenced games. It’s part of the more modern way of doing movies.

Bidgolirad: They’re from the movies, but in their personal lives, they also play games. They know what’s going on in games. [Jean-Julien Baronnet of Ubisoft and Brad Weston of New Regency are leading the project; actor Michael Fassbender will star in it.]

GamesBeat: Given that a lot of gamers are going to watch these movies, does that change what you do in some way?

Bidgolirad: Of course. That’s why we wanted to take control of the situation. We want to take care of our IP, and that means taking care of the fans of those IP. We wanted to make sure that these movies are as close to the DNA of our games as possible.

GamesBeat: I went to Pixar for two days while they talked about the making of Monsters University. With 12 years between the first movie and the second one, they talked about how many millions more pieces of fur they could put on the Sully character, and then they doubled the size of the server farm, just to be able to render it all. Rendering it took something like two years.

Bidgolirad: And of course now we’re doing games that are just as huge. Lots of people are involved in the same game. It has to run on different platforms. It needs multiplayer. It needs to talk to cell phones and everything. It’s becoming more sophisticated and more complicated to do an Assassin’s Creed than even a Pixar movie. I love their movies, but thinking about all the things you have to take care of, a game is just as scary. I’m happy to be doing film.

GamesBeat: It seems like an interesting process. Very late in the game, it’s very hard to change an animated movie. You’ve spent the last however many months rendering one scene. If you change that scene, you’re throwing out months of work. They say they have all the actors do their work first, and then they build the scenes around that dialogue. That seems very difficult as well. You have to get the story done first, and then not change anything. With actors you could change the script and reshoot it, but with animation…

Bidgolirad: Film is a really linear process, yes. It’s nice, because they know that, and they can work on that process step by step. You shoot it, you make sure it’s okay, and then you go on further. In a game, you can change just one character and do that late in the process. You put it all together and it will still work. The production is much more alive.

It’s almost scary, what they can do in games now. But it’s not the same—For example, let’s talk about the camera movement. It’s a real technical problem, because it has to think for itself. You don’t have a director saying, “The camera’s here.” It depends on the action. It’s the same for the characters. You can try to decide how to blend different poses and movements, but the program has to take control and do the best it can depending on what’s going on. It’s nice to see that they can do that in real time and it works. It all looks quite natural. We see people using it to make their own movies, machinima and things like that.

GamesBeat: Do the game creators and game tools give you what you need to make a movie now? Is that the idea, that technology has advanced far enough and game people are sophisticated enough that they can create for the movies? Or do you feel like Hollywood people are still the people you need to make your movies?

Bidgolirad: We have some nice tools and technology and some fine artists on both sides. We’re using game technology, real time, on the movie side. I worked for a French company a long time ago where we did a TV series based on a game engine, and we did that 10 years ago. So you can do that, of course.

A game engine is designed to do a game, though. Can you use that directly to make a movie? Maybe not yet. But we can work together and have little pieces of technology going from one side to the other. We can use more linear storyboarding and animation now in games. Little by little, we’re going to converge into a whole interactive process. But right now, they’re still well apart, I would say.