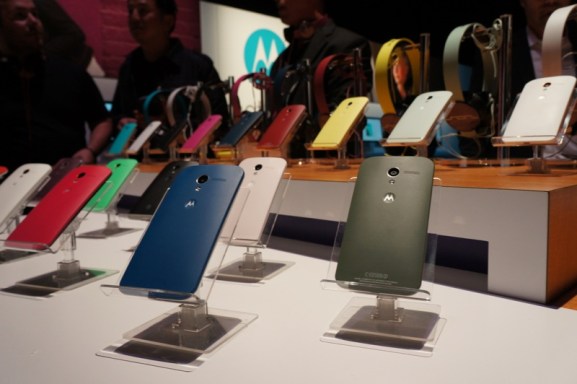 Motorola drummed up plenty of hype for its new flagship handset last week, but it’s also been criticized by plenty of gadget fanatics for specifications that don’t hold a candle to other high-end smartphones on the market. It doesn’t help that the Moto X also has a high-end price: $200 with contract.

[Check out our hands-on with the Moto X.]

But for Dennis Woodside, Motorola’s chief executive, the specs are only part of the story. “We made some different choices from our competitors,” Woodside told AllThingsD in an interview. “We were thinking about the total user experience.”

Indeed, after using the Moto X over the weekend, I haven’t noticed a huge experiential difference from other leading Android phones. The phone is powered by a slightly older Qualcomm dual-core processor running at 1.7 gigahertz, compared to the quad-core chips in the HTC One and Samsung Galaxy S4, but it felt just as zippy as its competitors. It’s not just about CPU speed, after all, the Moto X also has 2 gigabytes of RAM and a decent mobile graphics processor, which makes it well-equipped to run several apps at once and play games.

I also didn’t notice the slightly lower CPU speed as I was far more entranced with Moto X’s defining features: Its always-on voice commands, which basically turns it into Google Glass without the annoying eyewear, and its smart notifications.

The Moto X also sports a 720p 4.7-inch display, compared to the higher resolution 1080p displays on similar-sized phones. By running a lower resolution, Motorola didn’t have to dedicate as much processing power to rendering games and high-res apps. It’s also one of those specs that most users won’t even realize is lower than the competition: 720p is more than enough to make pixels invisible on a screen this size, which fits Apple’s “Retina Display” marketing.

At the end of the day, 1080p screens on smartphones under 5-inches is completely overkill. The only reason you’d include it is to match your specs to other companies going overboard.

At the Moto X unveiling last week, I asked one Motorola representative how they consider the phone’s standing. Is it mid-range, or high-end?