First-person shooters just don’t work that well on mobile devices. It’s too hard to replicate the complicated controls of a PC or console experience with a touchscreen, at least without making a ton of compromises.

Most mobile shooters try to copy the twin-stick movement of games like Call of Duty and Halo with virtual sliding pads on the bottom corners of the screen, but this solution lacks precision. And then what do you do about all those other inputs? How do you shoot, crouch, throw a grenade, reload, switch weapons, and so on?

The Drowning, a new free-to-play shooter available now for iOS devices, thinks it has the solution. It offers a completely different moving and shooting scheme, one that’s created from the ground-up for a touchscreen without trying to replicate the experience of using an actual gamepad.

And it works. Kind of. Unfortunately, the actual game this “revolutionary” control scheme serves is a chore to play.

A new way to play

Developer Scattered Entertainment is quick to tout The Drowning’s controls as its most important feature, and I’m inclined to agree that they’re the most interesting part of the experience. To move, you simply tap where you want to go. You use two fingers to shoot, with your aim landing between the two touch points.

Precise aiming has always been a pain with mobile shooters, but The Drowning’s unique setup makes it much easier to land headshots. Moving, however, is a bit more clunky. Tapping around the map is great for travelling longer distances, but it’s not good for smaller, more tactical movement. Still, it’s a refreshing way to play a touchscreen shooter. 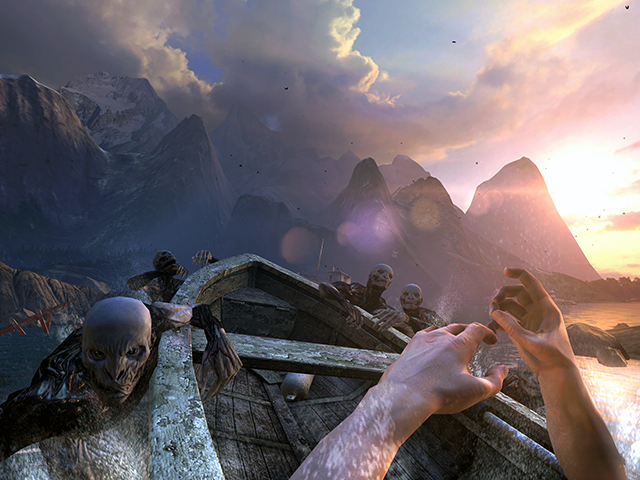 The Drowning breaks up its action into short missions that only take a couple of minutes to complete, which means you can easily pick up and play for quick spurts. Usually first-person shooters require some dedication of time, so it’s nice to have something with a faster, more arcade-y feel.

The Drowning is free-to-play, which means you can shoot things without spending any money. But you’ll pay for your thriftiness with a series of headaches. The actual game consists of small, timed missions on tiny maps. You either attack a group of zombie-esque creatures or defend a location from them as they try to break through small barriers. Essentially, both modes are the same. You run around and shoot the bad guys until they die.

Taking on a mission costs gas. Once you run out of gas, you have to wait until the game gives you more. Or you can buy some. This sort of playtime bribery is the worst kind of free-to-play.

And you’ll need a lot of gas. You progress through The Drowning by collecting items and crafting weapons and vehicles (which, of course, you can do faster if you’re willing to spend the money for it).  You’ll need new weapons to kill certain kinds of enemies, and you’ll need the vehicles to access new missions. You’ll often find yourself playing the same level over and over, hoping that the last item you need for your shotgun will drop before you run out of gas.

You can also spend money to instantly get crafting materials and play through missions that promise new weapons. Hell, you can even pay to increase your ranking after a mission, which of course earns you better and more rewards. While that’s all a bit more reasonable than completely shutting you off from the game, they’re still “pay to win faster” buttons. So, yes, you can technically play The Drowning for free, but you’ll feel constantly handicapped if you do.

After about an hour of playing, you’ve pretty much done everything The Drowning has to offer. Every mission is basically the same. You kill the same, boring enemies in the same, boring areas. I found myself quickly playing on autopilot, especially when forced to redo the same mission over and over while waiting for a specific item to drop. Even new levels all feel familiar. Everything has that generic shooter look. You know: all grey, brown, and dreary.

It’s like sitting outside for hours during an overcast day. The Drowning’s vague, post-apocalyptic world has no detail or personality to it.  I feel like I should complain that the story is so bare and nonexistent, but I found the world so unoriginal and unexciting that I’m actually thankful I wasn’t subjected to much of it. 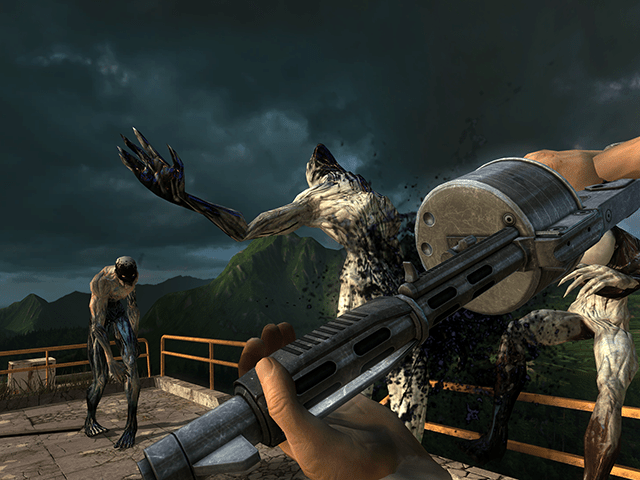 Above: The Drowning, a free-to-play shooter for iOS devices.

The controls don’t save it

So that really leaves the new control scheme as The Drowning’s one saving grace, but it even it has its problems. It’s impossible to move and shoot at the same time, and I was constantly sending myself across a level by accident when I was actually trying to shoot something.

Like I said, the two-finger aiming is a good idea, but it’s not worth all the other headaches. Not to mention that using two fingers on the giant iPad screen is cumbersome unless you’re resting the device on a surface, and the iPhone is just too small for such precision. Maybe the iPad Mini would work great for it, but I wasn’t able to test the game on one.

The Drowning places all its bets on the promise of a better way to play a first-person shooter with touchscreen controls. And while its two-finger shooting is interesting, it doesn’t come close to replicating the precision that gamers expect from traditional control schemes.

But The Drowning really loses itself with every other detail. Its world is bland and uninviting, its free-to-play systems annoying and restrictive, and its gameplay shallow and repetitive. You can download The Drowning for free, play it for 10 minutes and learn everything about it, and then delete it from your device and your memory.

The Drowning is out now for iOS devices.