Above: Naughty Dog’s The Last of Us

The beginning and the ending

GamesBeat: The beginning of the game knocked me off my feet. It was very different in that you started out with the impact of this virus on everyone else. A typical zombie story or whatever, it seems like it would start out with an explanation of where the virus came from or something. You guys didn’t do any of that stuff. You just started with something weird happening in this town. Can you talk about that?

Throughout production, Neil and I focused on how less is more. How do we strip down things to get to the core? How do we leave things to subtext? Specifically, using the video game medium for what you’re describing about how we started the game—It’s more intriguing to play through these events as they truly would happen to somebody, and not have the privileged knowledge about what’s on TV or how scientists have discovered this virus and how it spreads. It’s more interesting to see how it’s actually going to go down. It’s way more intense, because it leaves so much to your imagination.

The Hitchcock way of doing things is that you’re left to interpret it yourself, which is way worse than listening to somebody expound on how A matches with B and B equates to C. That’s not nearly as intriguing.

One other lesson learned is that you don’t have to show your whole game development. That was a success for us. We showed very little of the game and I think that paid off at the end. Going forward, I think we’ll keep doing that.

GamesBeat: That was one of my questions. What should the gamer remember about the beginning when they come upon the ending?

Druckmann: That’s an interesting one. There’s the question of what Joel has lost. The game explores this concept of a fate worse than death. If you turn into one of the infected and you’re still conscious, but lost in there, that’s a fate worse than death. Here’s this guy who’s lost his kid. That’s the worst fate for a parent. You’d rather die a hundred times than experience your child dying. And here he is at the end about to experience that again. How far is he willing to go to not have that happen? 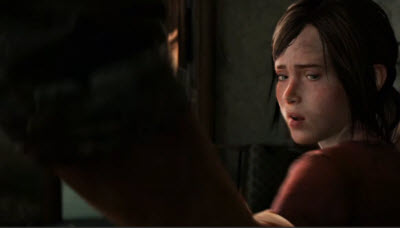 GamesBeat: When I wrote my own story about this, I used a line from Schindler’s List: “Whoever saves one life saves the world entire.” I always thought that was a great quote. The game and the ending made me think about it. The funny thing about it is that’s not true in this case. You save a life and doom the whole world.