And no, we’re not talking about fancy vibrating underwear.

Haptics is communication via touch — such as when your phone buzzes in your pocket as you get a text, or your Xbox controller vibrates when your virtual spaceship gets blown up. But that minor vibration is just the beginning. Cars, laptops, ATMs, and even hospitals are all applications that are starting to benefit from machines that touch us back.

That’s translating to a haptics market — a relatively small billion-dollar sector just last year — setting up to hit a very significant $13.8 billion in 2025. 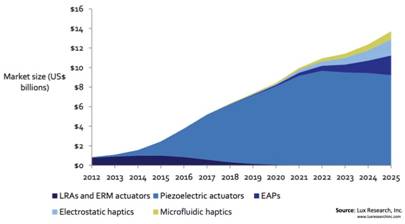 “The goal with haptics to to improve user interfaces by making devices more intuitive and more enjoyable to use,” report author Anthony Vicari told me today. “For instance, Ford is considering whether or not to keep touch screens or go back to knobs and buttons because people find the touchscreens hard to use.”

Old-school automotive controls, of course, offer built-in natural haptics native to the analog world. Volume dials, for instance, subtly click up or down a few notches. Switches thunk down, and switches push in, all with their own unique feel.

According to Vicari, however, there’s a marriage of touchscreen and analog via three key haptics technologies that could give us the best of both worlds. 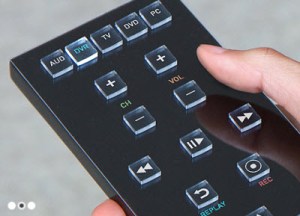 “You primarily have electro-active polymers, which can change in size or shape, micro-fluidics, which can create actual buttons on a screen, and electrostatic force haptics, which enable the feel of drag or texture on screens,” Vicari says.

Micro-fluidics is already being used to marry touchscreens and real buttons in a technology demonstrated at CES 2013 by Tactus. And I’ve driven the new Cadillac CTS, which offers in-seat vibration technology to offer eyes-free warning of approaching cars or barriers.

Other applications, however, are in robotic medical devices, which are becoming increasingly important.

According to Vicari, manufacturers are using haptics to provide “very high value information” to users, who are in this case surgeons performing remote surgeries. That information, of course, will help surgeons understand things like whether they need to push harder and cut deeper, or whether they’ve already reached bone.

In addition, gaming is a major haptics market, and has been since force feedback steering wheels were introduced for racing games.

“One of the biggest uses is simple confirmation,” Vicari told me. “Pressing a touchscreen with no response can be challenging.”