As a fundamental innovation, the touchscreen display has moved far beyond the smartphone and wormed its way into tablets, notebook computers, and the emerging category of wearable computers. And its reach will only grow greater as displays become more flexible and accurate, according to bunch of speakers at NPD DisplaySearch’s Emerging Display Technologies event today in San Jose, Calif.

The display is the computer. That’s a memorable twist on an old saying from tech guru Scott McNealy, who declared “the network is the computer.” But Shane Wall, chief strategy and technology officer in the mobility group at Hewlett-Packard and a keynote speaker at the event, said that the new twist on the saying is becoming true. Increasingly, the value in the computer is captured in the display, he said. And increasingly, that value will be manifested in mobile devices.

“In order to make the computing real, we had to make fundamental changes in the input and the output of a computer,” Wall said. “It’s a common saying, and it is becoming more true everyday, that the display is the computer.”

As Microsoft was preparing its touch-oriented Windows 8 operating system, Intel did a global survey of hundreds of people and their feelings about touch. Almost 80 percent said that they wanted to interact with a computer via a touchscreen, rather than a keyboard or mouse, said Matt King, senior engineering manager at Intel. 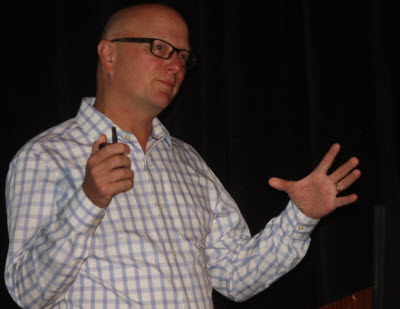 Above: Shane Wall of HP

e iPad in 2010. Intel and Microsoft have now fully jumped on the touch bandwagon with Windows 8 PCs. By the end of this year, about 18 percent of new laptops will be touch-enabled. By the end of 2015, the percentage will be 40 percent. Smaller displays for devices like the iPad Mini (5 inches to 7 inches) are also becoming more popular as a category. But one of the categories where touchscreens are needed is in the 14-inch and up size, said Paul Semenza, senior vice president and analyst at NPD DisplaySearch.

Displays are also getting bigger. Sweden’s FlatFrog has customers who are in production on 32-inch display that use its optical multitouch technology, said Ola Wassvik, chief technology officer at FlatFrog.

“The tablet space is where the battle is,” Shim said.

Lu-Fong Chua, product line manager for Gorilla Glass (the sturdy glass that protects touchscreens) at Corning, said that device categories are blurring as laptops, tablets, and smartphones morph and all share the same types of touchscreen surfaces. Laptops were used primarily for content creation, such as productivity apps, while tablets were considered content consumption devices. But as tablets grow up and laptops morph into 2-in-1 tablet/laptop models, the roles are changing.

“I’m sure you’ve seen the videos of a baby holding a magazine and trying to swipe it to change its image,” he said.

Beyond the realm of smartphones, tablets and laptops is the category of wearables such as Google Glass.

“We’ll see displays on contact lenses,” Wall said. “It’s still early. It will be many years before we see the light of day on that. But we have some fundamental proofs on that already.” 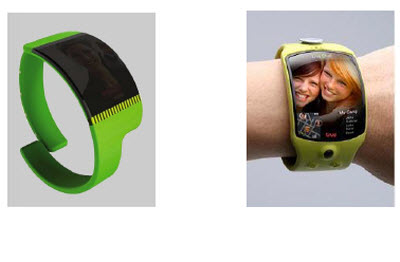 Wall at HP said that interaction is going to change, with touch being only one of many ways to input data into a computer. You’ll be able to use gestures to communicate with devices. Cameras could be input systems. You could, for instance, visit a foreign country and point a camera at street signs. The camera app will translate the signs so you can understand them.

“It’s a land grab for what body part we can get,” Wall said. “Things are becoming much more personal, with a display embedded on the body. ”

The only hold up in the technological race is the slow-motion progress on battery development.

Wall said, “The key piece, this cog, the display, will be very important in the overall economy. The investor returns for touchscreen companies have been disproportionate for the companies that have made them.”