I wanted to play Mario & Luigi: Dream Team, the fourth and latest entry in the action role-playing game series from developer AlphaDream, because I’m a fan of Paper Mario’s similar style and because Nintendo christened 2013 the Year of Luigi. For a character whose fictional peers and players alike constantly ignore and belittle him, that’s a big deal.

While the recent New Super Luigi U looks to me like a character-swapped version of New Super Mario Bros. U, Dream Team (out Aug. 11 for Nintendo 3DS) promises the younger mustachioed brother redemption. In his dreams, Luigi can be anyone — as brave and strong as his big bro. I wondered if the developer would take this opportunity to honor him seriously, and a few minutes in, I was immediately skeptical as he tripped over his own feet and others lobbed their usual ridicule. Before long, however, the game’s themes took precedence, and Luigi conjured a world where he finally belonged.

In this adventure, Mario, Luigi, Princess Peach, and their pals set out for a faraway island after receiving a mysterious invitation. The inhabitants of Pi’illo Island waste no time receiving them with warmth and breaking into celebration, but omens have clouded our heroes’ journey from the outset. A demonic bat king named Antasma soon escapes from the dream world, where the legendary Pi’illo folk (yep, they look just like pillows!) and their Prince Dreambert have imprisoned him. The villain teams up with Bowser for double the evil. 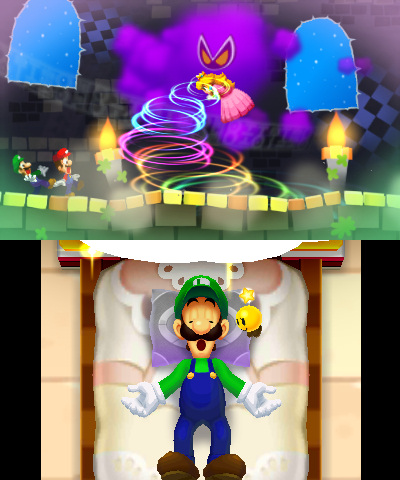 Above: Mario and Luigi can fight together in the dream world.

From the moment it begins, Dream Team is a wonderland of 3D graphics, color, and sound. Nothing’s better than seeing a monster erupt into a shower of rainbow stars or watching countless Luigis spin around the screen. The dream world that Luigi can access through sleep (only he wields this power) is a remixed version of reality, from the slowed-down music to the multilayered backdrops. Just when you thought Pi’illo Island was beautiful — with textured, clay-like graphics you can almost reach out and touch — the game takes its style to the next level.

Even an act as simple as breaking purple nightmare chunks, which have crystallized the lost Pi’illo people (your allies), is satisfying to the ears and eyes. Hear it crunch as it shatters in 3D. I especially love the charming Italian, Popeye-like gibberish that the brothers speak.

What’s amazing about the Mario & Luigi formula is that it’s a turn-based role-playing game with an active system. Players can never sit idly back and mash buttons to speed through menus and attacks like in other titles.

The addition of 3D is a huge boon. Every battle becomes a test of observation, timing, and skill. Enemies cycle through a number of different offensive moves and can charge from all sides, making matches as three-dimensional as they look. Because each adversary exhibits tells, or signs of how to learn its behavior, Dream Team is all about mastering this dynamic and clearing expert challenges (dodging or countering without taking damage) for rewards. 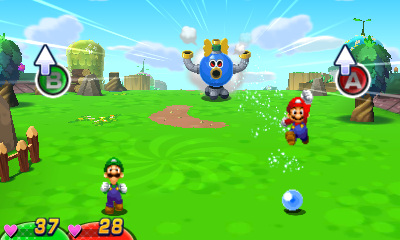 Above: A boss battle in the “real world.”

Fighting is key to long-term victory, so players should engage every creature they see on the field. With preemptive strikes and deflective maneuvers, these encounters can be quick and highly enjoyable once you get the rhythm down. 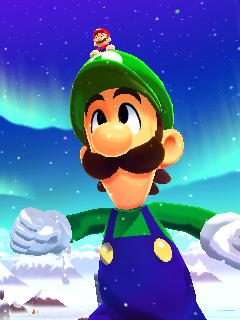 Above: Mario can help Luigi in giant battles from atop his hat.

Mario & Luigi can pull off Bros. Attacks (which sometimes involve tilt functionality) when they’re working together, but in the dream world, Luigi’s essence fuses with Mario. The result is ridiculously gratifying. Stomp on an army of enemies and a dozen Luigis (clones called Luiginoids) rain down, too. Special moves called Luiginary Attacks enable Mario to roll up a hundred Luiginoids in a ball to bowl over foes or a hammer to smash them flat.

The game is very fair, but it pumps up the difficulty during boss fights, which use every available benefit to the 3DS to great success. The best part is when Luigi focuses his energy and grows to an enormous size in giant showdowns. In these unique events, where players turn the 3DS sideways and use the stylus to trigger a whole new set of moves and counters, the green-suited plumber is tough enough to shake mountains.

Through Luiginary Works, the dream world offers Mario and Luigi ways to interact with their environment that are otherwise impossible. This is the reason why players will tug at the taller plumber’s mustache or nose on the bottom touch screen, but the component is so much more than goofy face manipulation. 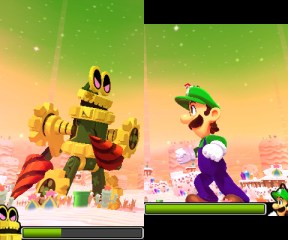 Above: An early giant battle between giant Dreamy Luigi and a drill robot.

Luigi can merge with certain background objects to help Mario navigate through dreams. Many of these are simple, like a palm tree that can stretch its branches down to Mario, grab him, and fling him upward. A fan can blow platforms, coin boxes, and more into the foreground. Some Luiginary Works are cooler, like a propeller that lets Mario stick to and climb along walls or a whirlpool that changes the directional pull underwater. But the best and most versatile is the constellation. It lets Luiginoids build into stacks with Mario riding on top, and later on, players can toy with other shapes as well.

Each form has multiple applications, too. For example, the tower of Luiginoids can lean to hit switches, ground pound to smash blocks, or jump great heights into the air. It can even compress to pass through areas where the ceiling is low and flick away enemies on the screen as if they were gnats.

We often take for granted the little details that make games so functional and inviting, which is what allows us to become totally immersed in them as the hours tick by like seconds. Mario & Luigi: Dream Team is one of those wonderful few, and the most insignificant of features make progressing tremendously easier.