I want to get a baseball game. Which one is best?

The stereotype for the under-informed gamer is typically someone who only buys one or two games a year. They want their sports games and maybe Call of Duty. It’s easy to dismiss that kind of gamer as a casual because they don’t ingrain themselves in the culture, but while traditional media outlets ignore these people, Metacritic serves their needs.

For example, two officially licensed Major League Baseball games hit the market in 2013. One from Sony and another from 2K Games. A quick search on Metacritic for “MLB” instantly reveals that Sony’s MLB 13: The Show for PlayStation 3, which scored an 87, is probably a better bet than 2K Game’s MLB 2K13, which scored a 48.

It also reveals that the PlayStation Vita version of The Show (75) isn’t quite as good as the console version, but both iterations of The Show are better than 2K’s release.

This same strategy works for licensed games in entertainment.

For example, two different games based on The Walking Dead franchise hit consoles in the last years. Fans of the show or the books might have no idea which one is the good one, but Metacritic again reveals that the Telltale game (92) is amazing while the Activision shooter, The Walking Dead: Survival Instinct (32), is atrocious.

I have an Xbox 360, a PlayStation 3, and a PC, which one should I get BioShock Infinite for?

For this question, I again just used Metacritic’s search tool. The only three results for “BioShock Infinite” were for the game on Xbox 360, PlayStation 3, and PC. When I sorted by score, I found that Metacritic had the PC version and PlayStation 3 version of the game listed at a 94. Meanwhile, the Xbox 360 variant has a 93.

Someone might believe this means that the PlayStation 3 and PC versions are on par with one another. That isn’t the case.

DigitalFoundry, a website that runs comparison tests for games on different platforms, found that BioShock for PC has a better frame rate, richer lighting, and more-detailed textures than the game running on PS3. Everything else is identical. The website also found that the PS3 version runs slightly better in very rare occasions.

In a situation like this, Metacritic is clearly capable of misinforming consumers.

There are a ton of iPhone games — what releases are actually good?

Discovering quality games on consoles is tough for a lot of people outside of the hardcore. On iPhone, that difficulty applies to just about everyone. Apple’s mobile platform has thousands of games and great products struggle to standout in that crowd.

A lot of people use the iTunes charts but those follow sales trends rather than any measurement of quality. The Games section of the iTunes App Store, on the other hand, often offers up “New & Noteworthy” games and an “Editor’s Choice” section. These can quickly lead consumers to quality titles like Rymdkapsel. Apple’s market also has a robust user-reviews system that can give gamers an idea of how other people felt about a release.

In the case of a game like Rymdkapsel, gamers could check out Metacritic to see what reviewers think. A lot of mobile games don’t get enough reviews to qualify for a Metascore, but most of the big ones do. Rymdkapsel is one of those; it scored a 90 based on the reviews of nine critics. In this circumstance, Metacritic isn’t really providing any new information. At best, it is merely confirming the App Store user reviews.

Metacritic isn’t useless for mobile games. It is still an excellent way to find out about a bunch of high-quality titles in a short amount of time. Metacritic’s iOS landing page surfaces all the best-scoring games from the last 90 days and often features games that the iTunes App Store doesn’t.

For example, XCOM: Enemy Unknown is currently nowhere on the front page of iTunes’ gaming section, but it is right at the top of the best-reviewed iOS titles on Metacritic. 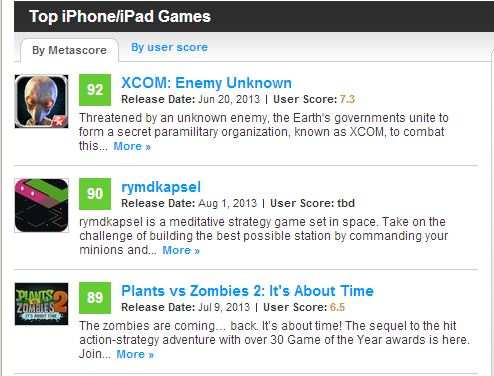 Above: The top three iOS games on Metacritic for the last 90 days.

I saw a commercial for Defiance the game while watching the television program. I like the show, but is the game any good?

Earlier this year, publisher Trion Worlds inundated television with advertisements for its multiplayer online shooter Defiance. The sci-fi game is a companion to SyFy’s hour-long action-drama of the same name. When that show debuted, it was one of the highest-rated premieres in SyFy’s history. That means that several hundred thousand people got to see a commercial for Defiance the game a bunch of times. Some of them probably wondered about running out to the store to check out the game. Over 1 million did, according to the developer.

Maybe a lot more (or less) would have purchased the game without Metacritic. 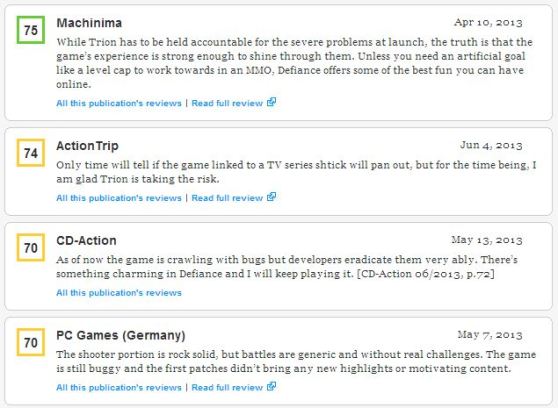 Above: Some snippets of Defiance reviews on Metacritic.

Defiance for PC has an average rating of 65. That means reviews were generally mixed. According to Metacritic, Defiance has five positive reviews, 32 mixed reviews, and two negative reviews. The quotes Metacritic pulled from critic reviews reveal that the game’s shooting mechanics are solid and that the title is similar to Borderlands. The quotes also often ding the game for a lack of humor and for not living up to the quality of Borderlands. In general, fans of the show would probably enjoy it if they like shooting stuff with people online.

This is the kind of information that can give a person confidence in their purchasing decision, or it could help them decide to save their money. Either way, it’s good data to have.

A useful tool for normal people

Metacritic definitely isn’t perfect. Even its creator acknowledges that it is just one tool that consumers should use to make a decision, but it is a useful tool.

When I take a step back and put myself in the shoes of a less-informed gamer, I found that Metacritic is a shortcut to getting up to speed about the relative quality of recent releases. It’s easy to understand and mostly accurate.

If you’re a hardcore gamer, it’s probably still going to make more sense for you to cultivate a relationship with a couple of critics who mirror your tastes. For anyone who doesn’t have time for something like that, Metacritic is a smart way to make game-buying decisions.

But what about the evil publishers?

One of the big criticisms against Metacritic is that publishers use it as a barometer for success and base bonus contracts for developers on whether they reach a certain Metascore threshold. That is potentially unfair, but it’s not Metacritic’s fault that game publishers have skewed the website’s purpose.

It seems silly to scold Metacritic for something it can’t control especially when it offers up such a useful service. Although, some disagree that it is truly useful.

“When we put our faith in Metacritic as an impartial, scientific measure of quality, we should probably ask ourselves whether the crowd – the crowd of journalists as well as players – is really wise or just mediocre, incapable of recognizing and rewarding the new and different,” Epic Mickey creator Warren Spector wrote in a piece slamming Metacritic. “Before you come back at me with arguments, look at the highest rated games and then we’ll talk….”

But it’s hard to see what he means. Among the highest scoring games of all time on Metacritic are Half-Life 2, World of Goo, LittleBigPlanet, Portal, Grim Fandango, and Minecraft. Games like The Walking Dead and Dark Souls placed near the top of the website’s highest-rated releases for 2012 and 2011, respectively. These games are all — or at least were — very different, and the critical consensus recognized and rewarded that.

It seems to me that Metacritic works, and that’s probably why publishers keep using it.