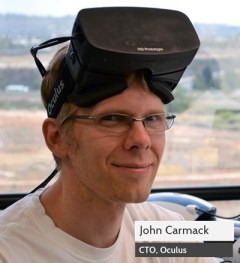 John Carmack, the Id Software lead programmer responsible for games like Doom and Quake, is joining Oculus VR to oversee the company as its chief technology officer. Oculus is currently in the midst of developing the Oculus Rift virtual-reality headset that makes players feel like they are in the game world.

“I have fond memories of the development work that led to a lot of great things in modern gaming — the intensity of the first-person experience, LAN and Internet play, game mods, and so on,” Carmack said in a statement. “Duct taping a strap and hot gluing sensors onto Palmer’s early prototype Rift and writing the code to drive it ranks right up there. Now is a special time. I believe that VR will have a huge impact in the coming years, but everyone working today is a pioneer.”

Carmack is now full-time at Oculus, but his position at Id Software is apparently “unaffected,” according to the Penny Arcade Report. We’ve reached out to Id to ask for further clarification on how Carmack’s move affects it.

“John’s early experiments with the Rift put Oculus on the map and helped create an amazing amount of momentum around virtual reality,” said Oculus founder Palmer Luckey. “His technical genius and passion for solving hard problems makes him the ideal CTO.”

Oculus VR raised nearly $2.5 million when it launched the Rift as a Kickstarter. The company already shipped dev units out to nearly all of its backers. Now, it is working on finalizing the product for consumers.

The Rift is important because it is the first product that appears to have a chance to make virtual-reality work as an actual consumer device. The gaming industry has long tried to bridge the gap between television play and a more immersive experience, but every attempt so far has failed.

“The paradigms that everyone will take for granted in the future are being figured out today; probably by people reading this message,” Carmack wrote in the statement. “It’s certainly not there yet. There is a lot more work to do, and there are problems we don’t even know about that will need to be solved, but I am eager to work on them. It’s going to be awesome.”