Sega still hasn’t given up on a 3D Sonic, so it’s delivering another this year.

During this morning’s Nintendo Direct broadcast, company president Satoru Iwata discussed a handful of previously announced Wii U and Nintendo 3DS games: Sonic Lost World for the Wii U and 3DS, available Oct. 22 for both platforms, was the first of the bunch.

Sonic Lost World appears to have the gravity-defying level style of Super Mario Galaxy. Sonic freely runs across walls and along platforms and levels in the sky. Players can choose between three gameplay speeds, which Iwata says will make the game, “more engaging for players of all skill levels.”

The main antagonists are a group Iwata called “The Deadly Six,” which was just a handful of six big, ugly creatures.

Sonic Lost World is coming for both the Wii U and Nintendo 3DS. The two versions can communicate with each other through a local wireless connection, with the 3DS serving as a crafting station of sorts for the Wii U.

“The Nintendo 3DS will allow the player to create and customize radio controlled vehicles in Tails’ lab and send them to the Wii U version of the game. The RC vehicles can then be used to support Sonic in the co-op mode on Wii U,” said Iwata. 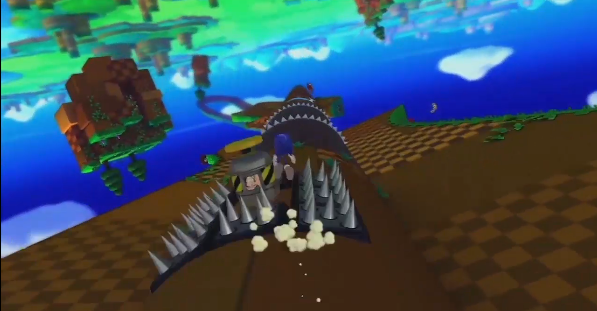