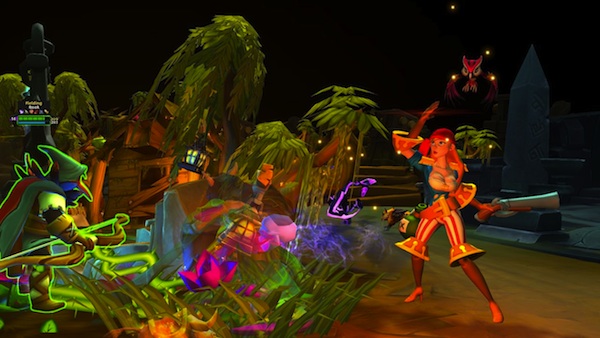 Above: Pets, like the owl above Caprice, can’t attack the other heroes. But their abilities enhance your character.

Strife will launch with 10 pets, which are creatures that follow you into battle. They level up if you feed them food (a common resource you earn just by playing), have their own set of abilities, and can even evolve. In their third and final form, you can pick from one of two passive boosts that improves the efficacy of your character’s actions. Pets can also serve as a quick visual reference when assessing your opponents’ and allies’ skill level.

“They combine your options or your out-of-game progression into a [single] package that upgrades, and you feel some attachment, too,” said Jesse Hayes, Strife’s executive director of art. “We like to think that’s just cooler than spending points in a talent tree that you never see or never interact with.”

To unlock the pets, you can either use Shards (also earned from playing) or real money to buy them.

Typically, MOBAs have shops where you spend your hard-earned gold from battle to buy items, many of which are just recipes made up of cheaper materials and increase your character’s attributes. Strife has that, too, but like the characters, the overall number of those items is small. The twist is that you can change how they’ll affect you through crafting. By swapping out the “building blocks” of these recipes (like health and damage components), you’ll create a customized item that you can then use in the next match, assuming you have the gold to buy it.

When you craft an item, you’ll also have the chance to improve them and unlock its common, rare, or legendary bonuses. You can use Essences — an in-game commodity that you can’t buy with real money — to try to improve the item again or to make it permanent (crafted items/recipes only last for a few days). 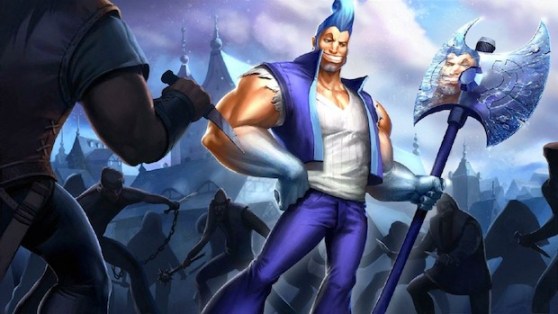 Above: Ace is a strong but cocky hero with ice powers.

Preemptive strikes against jerks in the community

If you’ve played any MOBA before, you might have run into someone on your team who got mad at you for not playing your hero the way they want you to. Or they were angry that you stepped into the wrong lane. Whatever the reason, they somehow felt justified enough to barrage you with insults via chat. S2 Games wants to get rid of or at least decrease these instances by implementing some features that, on the surface, sound like a drastic improvement over what other MOBAs have done.

For instance, you can’t see anyone’s death statistics or kill-death ratios, information that some people use to pin the blame on their teammates if they’re losing. Except in the postgame lobby, you can’t chat with the opposing team. You can only use voice chat with people you grouped up with privately for matchmaking. And you no longer keep gold just for yourself — you share it with your team, a practice that encourages players to work together rather than compete for resources. 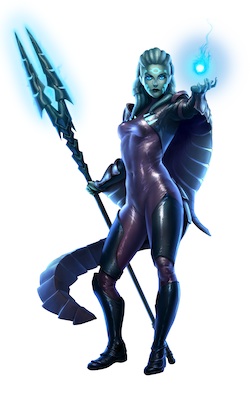 Above: Minerva is from Vorbis, the cybernetic/underwater plane.

Strife also has a Karma system in place for rating a player’s conduct: a positive vote if they were helpful and friendly or a negative one if they were just being a jerk. Cumulatively, these votes make up your Karma score. An algorithm searches for extreme outliers from the average and will dole out benefits or punishments. Those who repeatedly have a low score face the risk of receiving poor rewards at the end of a match (such as coal, which has no value whatsoever), being muted, or getting banned from playing for a period of time.

On the other hand, if your Karma score is high, you’ll have better luck at getting rare rewards. However, the score is never permanent: It’ll gradually improve or deteriorate from those extremes. And those who abuse the system and just score people negatively all the time will soon see that their Karma votes will suddenly weigh much less than everyone else’s.