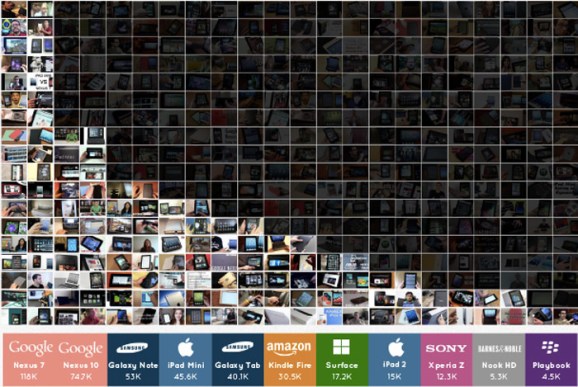 The iPad may have lost the tablet wars to an army of Android tabs, but it’s still first in people’s hearts. Second place, however, belongs to a somewhat unlikely candidate.

eBay, where many people go to sell their tablet when buying a new one — and which sells a lot of tablets via eBay Deals — conducted a study of tablets on social and in Google: mentions, likes, curiosity, searches … and problems. The results reveal that iPad is still the king but that Amazon’s Android-running Kindle Fire is the most likely contender to replace it in our affections.

The tablet market is in a state of massive upheaval.

Long-time leader iPad has seen its market share sliced in half, though Apple still outsells tablets from any other two or three companies combined. But in spite of its market share declines, a search on tweets in the past month shows that iPad still has almost five times more “I love my tablet” mentions on Twitter than any other tablet, and about 2.5 times more than all the top Android tablets combined.

In terms of interest in new tablets — and unboxing videos of them — Google’s own Nexus 7 and Nexus 10 lead the pack by a considerable margin, revealing considerable hunger for Google’s latest tablet offerings. The Nexus 7 had 118,000 unboxing video views over the period of the study, while the Nexus 10 had a massive 747,000.

Interestingly, the Galaxy Note is in third, and iPad Mini doesn’t enter the picture until fourth, with the iPad 2 way back in eighth.

The one place where tablet owners seem to agree is problems.