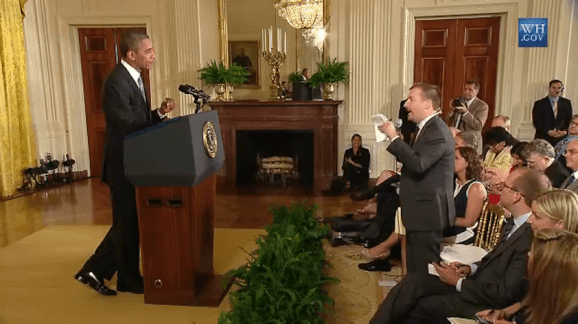 President Barack Obama laid out a four-step plan to help the American public understand the government’s surveillance programs, saying he, too, would be skeptical if he wasn’t on the inside.

“It’s understandable people would be concerned. I would be too if I wasn’t inside the government,” said Obama in a press conference today. “The question is: How do I make the American people more comfortable? If I tell [First Lady] Michelle [Obama] that I did the dishes — now, granted, in the White House I don’t do the dishes that much — and she’s a little skeptical, well, I’d like her to trust me, but maybe I need to bring her back and show her the dishes.”

His four-step plan looks as such:

Conversations around privacy and the implications of government surveillance surfaced when former NSA contractor Edward Snowden released secret documents regarding these programs. Obama stressed in his press conference that he had already started the process of reviewing Section 215, as well as FISA section 702, through an executive order released before Snowden’s action. He expressed frustration that Snowden’s information is being trickled out over weeks, leading to what he believes is a misinformed public.

“What we’ve seen is information come out in dribs and in drabs,” he said. “Rather than have a trunk come out here and a leg come out here, a tail come out there, let’s just put the whole elephant out there.”

Furthermore, he reminded people that he did not cancel a recent summit with Russian President Vladimir Putin wholly because of Snowden’s asylum in the country. He did say that Putin needs “to take a pause, reassess where it is that Russia’s going.”