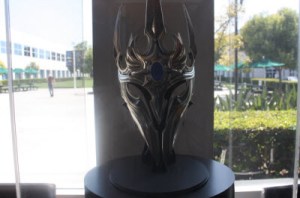 Above: A World of Warcraft mask in the lobby

As I wandered through their headquarters, accompanied, of course, by a PR handler, I got a glimpse of what it’s like to live and breathe gaming. These teams have made hit after hit, and they live inside cocoons in their cubicles. Blizzard should really just keep them chained to their desks. But I suspect that, even if they were prisoners, they wouldn’t run away. 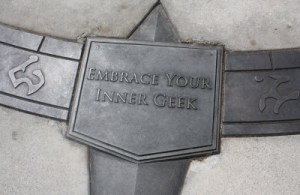 Above: Engraved: wise words from Blizzard

Underneath the big Warcraft stature in the middle of the campus are a series of engravings that convey the Blizzard way. One of them says, “Embrace your inner geek.” Another says, “Dedicated to creating the most epic entertainment experiences … ever.” The banners around the campus celebrate the 15th anniversary of the StarCraft game franchise. Most game studios come and go, but Blizzard has been here for decades. This is a place where being a geek is a badge of honor.

At Blizzard, it’s easy to see this is where they make epic games. There’s a museum in the lobby that is dedicated to the artistry and lore created by the teams on their most recent projects. The current exhibit boasts the company’s most recent release, StarCraft II: Heart of the Swarm. In the lobby, a sword and a shield are on display. An employee would get a sword like this after five years of service and a shield after 10 years. A mask inside a glass case (pictured above right) can be yours after 20 years of working in the company. Only a handful of people have gotten it, like Mike Morhaime, chief executive of Blizzard Entertainment.

While some teams are feeding existing game franchises that fans voraciously consume, others are hidden away, working on the next big thing. Blizzard management does what it can to coddle its thousands of employees — after all, they’re the hit makers of the video game business. Just about everything that Blizzard publishes is a big deal, and that’s why they’re part of a giant company, Activision Blizzard, which is in the process of buying its independence from Vivendi for $8.2 billion. Activision Blizzard is the No. 1 video game publisher in North America and Europe, and Blizzard’s big franchises — World of Warcraft, Diablo, and StarCraft — are a big reason why that is so. Vivendi itself once had a thriving game business, but all of it had to be dismantled because the publisher just didn’t have the same discipline or the same people.

When that shareholder buyout officially happens, Activision and Blizzard will be free to compete head-on against rivals who have been buying companies in an effort to get ahead in the transition to digital games. The corporate chiefs will be free to engage in their own acquisition binge if they wish — or cut back as needed. But here at Blizzard, amid a trio of three-story, very corporate-looking buildings, the job at hand is very clear but also very complex. They need to make hits, including new ones. They need to add some new “best game” awards to the giant collection of them in the glass case in the lobby.

Above: Tom Chilton and J. Allen Brack of World of Warcraft.

World of Warcraft still has 7.7 million paying subscribers, but the 12-year-old game lost 600,000 customers in just one quarter. WoW faces competition from free-to-play massively multiplayer online (MMO) games and new kinds of snack-sized entertainment on mobile devices. Blizzard developers like Tom Chilton and J. Allen Brack, who are the stewards on the World of Warcraft franchise, are coming up with ways to court new players, revive inactive ones, and satisfy the hardcore gamers who have a voracious appetite for content. They haven’t yet turned to the masses of fans to create user-generated content, as Sony Online Entertainment just announced with its competing title, EverQuest Next. 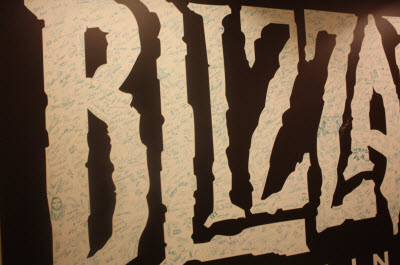 Above: Blizzard employees signed their names on this banner.

Blizzard’s WoW has been the mainstay of Activision Blizzard’s financial performance for a long time. WoW debuted in 2004, and it has been the No. 1 MMO in revenues for many of the intervening years. Since 2007, Blizzard has launched four major expansions to keep the subscribers happy. Most recently, it released Mists of Pandaria in September 2012.

But the usual bump from the expansion was shorter and less exciting, so Chilton and his team committed to doing smaller and more frequent updates for WoW. Patches are coming out every two to three months instead of once every six months. The number of developers working on the game is rising. The effort to keep this whole machine going is rather gigantic. And at some point in the future, WoW just might go totally free to play. 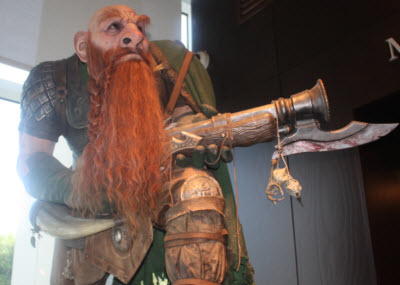 Above: Blizzard lobby statue (is this Mike Morhaime, CEO, holding a gun on Titan team?)

As we go into the holidays, Activision has warned that it will face greater competition than ever for titles such as Skylanders and Call of Duty. But Blizzard has a lighter schedule. It has repurposed Diablo III for the PlayStation 3 and Xbox 360. It is gearing up for a new season of competitive play for StarCraft II: Heart of the Swarm.

And it is venturing into free-to-play with two upcoming titles. Hearthstone: Heroes of Warcraft is a fast-paced strategy card game set in the Warcraft universe. That game is being built by a small team, with the same Blizzard style — that is, meticulous iteration. And Blizzard All-Stars is an action/real-time strategy game aimed at taking back some market share from the highly popular League of Legends by rival Riot Games. Blizzard All-Stars is ratcheting up in the production cycle.

Those titles are baby steps into the domain of digital games. But one of the projects that everybody wants to know about is Titan, a free-to-play, next-generation MMO which was recently reset from a 100-person project to something much smaller as the team decided to reboot its efforts. We got a scoop about the delay for Titan, but on the Activision Blizzard analyst conference call for the second quarter, Morhaime acknowledged that delay publicly.

“We are in the process of selecting a new direction for the project and re-envisioning what we want the game to be,” Morhaime said.

As I sat in the cafeteria and ate Blizzard’s yummy stir fry, I looked around at all of the posters, billboards, and other paraphernalia. In the halls where I roamed with my PR handler, I saw no sign of Titan, which is secretly being built somewhere at Blizzard. There are no banners or statues dedicated to it. But it is the unseen cloud hanging over everyone’s head. They have to get that one right. As I looked around, I thought of all of the pressure that startups feel when they’re making a new game. But I also imagine that, at Blizzard, where there is a way of life and a gaming empire, the pressure must be palpable. Blizzard really has to get an epic game like Titan right, or this empire will fall.

It’s a sobering thought. The game has no release date, and Blizzard won’t compromise its core values just to ship it earlier. But if all goes well, in the not so distant future, Blizzard will have several active games running on multiple platforms, using multiple business models, with multiple franchises targeting very different audiences. But only if those grognards stay at their desks and ship their games.

Check out our gallery of Blizzard below. 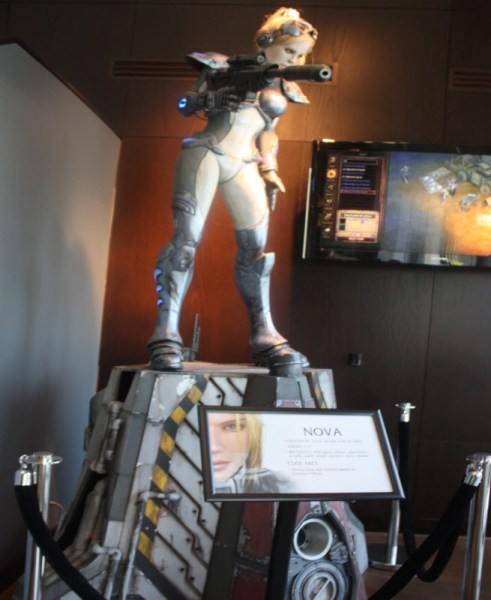 Above: From StarCraft Ghost, a game that never shipped.