My father used to say that some ideas are like pizza dough: they need to rest for some time until they grow.

I’d add to that the fact that some ideas need to find an echo somewhere before one can believe in their potential.

Google appears to be following both when it comes to the careful development of Google Glass, a potentially disruptive device with the opportunity for its own apps ecosystem. Even with a slow introduction to the developer community and huge potential to enable a smarter user experience, Google Glass remains at risk of not being adopted by the masses at all.

A colleague responsible for one of our smart computing products and I were watching the first session about Google Glass at Google I/O in San Francisco last May when we were presented a very simple diagram that depicted how Google defines the Google Glass Apps architecture. (This diagram is shown below.) 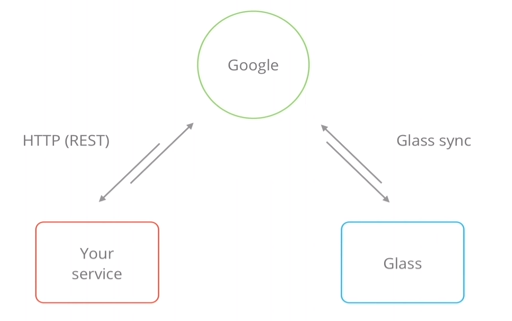 Since the room was packed with curious developers and members of the press, we were sitting far away from each other, but as soon as we saw the slide and even before the presenter fully explained it, we simultaneously texted each other with a “That’s it!” message.

We had been looking for the simplest architecture for our company’s smart digital marketing solution to serve content and functionality to users in real time, regardless of their device, while still taking their context into consideration.

The solution actually found us right then and there.

The architecture presented by Google for Google Glass is simple yet extremely powerful. It clearly makes Google the mediator of the user experience while the user wears and interacts with Google Glass.

Much has been discussed about this move, comparing it to the restrictive rules set by Apple and its iOS platform, but this is a shortsighted view in my opinion. Google is not exclusively imposing restrictions, but more importantly, it is intending to add a layer of intelligence to the whole process to foster relevance and avoid creepiness.

To protect personal privacy, many bars have already prohibited the use of Google Glass on their premises, and many other venues will likely follow suit. The only way to revert this trend is to make Google Glass highly relevant to real experiences.

Google chose cards as the interface for the apps running on Glass, which not only appears to be the right choice given the limited interface flexibility but also creates the opportunity to reuse them in future devices.

The simplicity and stickiness of cards have been proven by applications like Google Now and Google+, and for the distracted observer it looks like things are tightly connected. They certainly are.

Now let’s think about that innocent green circle with the word “Google” in it. By forcing every service to pass through Google before hitting Google Glass, Google is able to leverage everything it knows about you and your interests on top of a contextual layer (Google Glass is essentially a mobile device that you carry with you and is constantly on) to boost content and functionality relevance.

Google is literally showing its cards in this game by using sophisticated algorithms to correlate all the data it knows about users. In summary, a Google Glass unit comes with a big brain — the same brain that has been powering Google Now and surprising users by anticipating content and functionality that users will probably need in their next steps of their digital daily journeys.

People say smartphones have become our external brains: They have all the information we need when we decide to look for it. But a real external brain would be that one that can help you make decisions by collecting information around you and taking what it knows about you and your behavior. Google Glass and its big Google brain is a better contender to be our external eyes and external brain and the augmenter of our experiences in an intelligent way.

As we know, when things are new or become cool, many people try to join in on the trend. As far as this is concerned, one thing Google has going for it is that it’s cool to be smart. Google Glass is actual proof that glasses make you smarter, in this case with custom apps built to optimize the “always on” experience.

For certain, Google needs to make sure any hint of creepiness is left out of the equation with Glass and people feel comfortable wearing it. Most importantly, people not wearing Glass need to feel comfortable to be around those who do. Having the Google brain in the middle is definitely Google’s best shot.

Márcio “Mars” Cyrillo is executive director at CI&T, creator of smart applications that add a layer of intelligence to business. He is currently responsible for global marketing operations and strategic digital marketing initiatives, including CI&T’s “Digital Brain.” Mars is driven by constant improvement in: technology, his running, and the best lens to capture the NYC skyline.