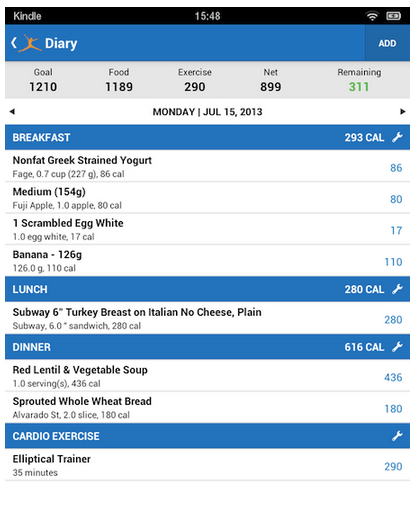 MyFitnessPal, a company that offers a popular app to help people lose weight, has raised $18 million in a first round of funding.

The company was founded in 2005 and has been profitable since then but has taken no outside cash until now. It boasts more than 40 million registered users, and shows no sign of slowing down. It says it has been adding more than 1.5 million new users per month this year.

Once you download the app, you take a few minutes to create a profile, including how much you weigh, your weight goals, your height, and how much you are active during the day. The app determines how many calories you should be eating and then tracks how much you are consuming. It helps you by telling you how many calories are in the specific foods you are eating. You can even scan the barcode on the box or bag of food you are eating to get the right information. It has a database of more than 3 million foods and hundreds of exercises.

We wrote about the company last year when it launched an API to let third-party developers build apps that use its information. And popular device makers, including Fitbit and BodyMedia, can connect their devices to MyFitnessPal’s database in real-time to draw nutritional information.

MyFitnessPal says its users have lost more than 100 million pounds to date.

In a release, the company said cofounders Mike and Albert Lee will use the cash to accelerate both hiring and global growth.