Google issued a Glass software update today that previews how the massive search and mobile company might plan to monetize its innovative wearable technology.

Swiping backwards on the head-mounted device’s tiny touchpad will now give Glass users more information options, including notifications of restaurant reservations, hotel bookings, and concerts. In addition, you’ll be able to find schedule and movie information for nearby cinemas. 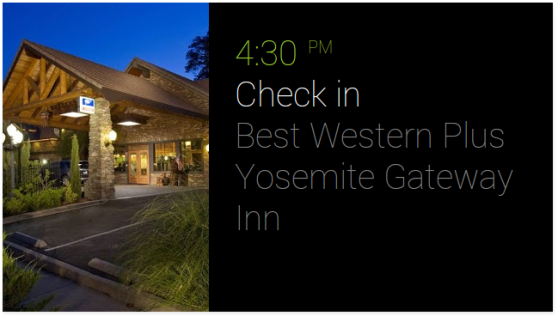 Google is delivering this information via its smart contextually-aware notifications and updates system, Google Now.

Also on Android smartphones, Google Now shows you local weather, traffic, flight, and sports scores via customizable “cards” that you can select or reject. But it is also built as a somewhat Siri-like personal assistant, allowing you to search after saying “Google …” and reminding you of upcoming appointments and events — or even informing you how much you’ve walked or cycled in a given day.

One of the new cards for Glass will show you live scores for your favorite sports teams. 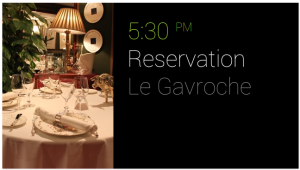 Google Now is an innovative integration of contextualized data, and it’s pretty obvious how Google will be able to monetize it via either suggestions on events, dining, or shows nearby that you might be interested in, or by acting as the personal assistant that Siri has long been intended to be by making actual dinner reservations, flight arrangements, hotel bookings, and more.

Other updates to Google Now include new voice commands, including Post an update (to post to Path) and Take a note (to add a note to Evernote).

In addition, Google has added new video player controls so you can pause, play, fast forward, and rewind videos you’re watching on Glass.