Yorrick was furious. The undead ambassador told me I was a horrible sinner that was damning the world to oblivion. But Oberon applauded my decision, as did a few other councilors who were happy about our latest ruling, which legalized gay marriage for everyone in Rivellon.

For a game whose most visible selling point are dragons flying around with jetpacks, Divinity: Dragon Commander is rife with a surprising amount of real-world politics as you fight for and manage your empire.

Released on August 6 for PC, Divinity: Dragon Commander is a hybrid of real-time strategy (RTS) and role-playing games set in developer Larian Studios‘ ongoing fantasy universe. You play as a half-human, half-dragon prince who has to unite all of Rivellon by conquering territories and vanquishing his twisted siblings and their armies. Punctuating the combat is a series of one-on-one conversations aboard your airship, where your words shape the plot just as much as your victories shape the battlefield.

You’ll have to master both sides to unravel the funny, thoughtful, and sometimes really weird storyline in this prequel to the Divinity series. 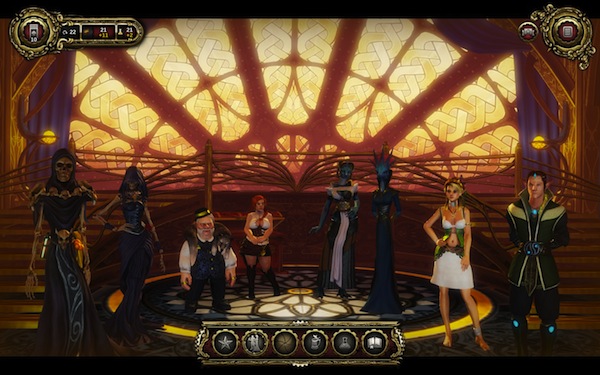 Above: Marrying a princess is more than just for love — you have to carefully consider which race you’ll align yourself with.

As the new emperor, half of your job is to manage the affairs of your empire, and helping you do that are your councilors, each of whom represents one of the five Civilized Races. Every so often, they’ll bring up a pressing issue and argue either for or against it — but it’s you who gets to decide what’s good for Rivellon. As with the gay marriage vote, many of these problems directly reference real-world issues: universal healthcare, the legalization of marijuana, women’s suffrage, and many others I don’t want to spoil.

With the councilors’ extreme personalities — one is deeply religious and conservative, another is liberal, the dwarf is a greedy politician, and the others sit somewhere in-between — these debates can come off as little more than a parody. Most of the time, however, I found the councilor’s arguments so passionate (thanks to the fantastic voice work) that I couldn’t help but stop and question myself.

Should I go with my own beliefs? Or should I make a choice that will directly benefit me for the war? I flopped back and forth, with my curiosity over the council’s reactions sometimes pushing me in the opposite direction. Each choice carries either an economic (gold and research points), military (cards you can use in battle), or plot reward (support in your countries).  You can also receive punishments — go against the gods or mother nature and your luck will decrease by a few points, for instance — and councilors will remember which proposals you rejected. 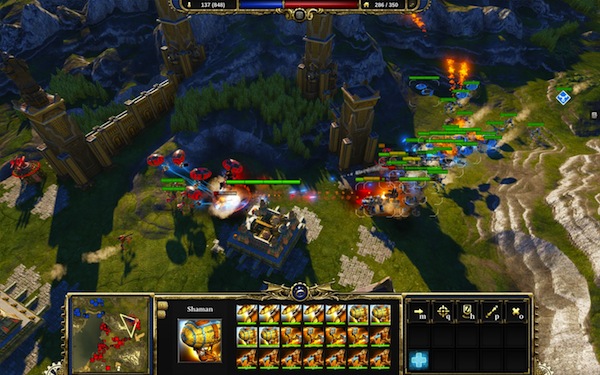 Above: When not playing as a dragon, you control your armies using a traditional RTS perspective.

Aside from the political realm, you’ll also have different ways of dealing with personal issues when talking to your four generals. Each represents a certain stereotype — a selfish drunkard, a pompous racist, a happy-go-lucky woman who hides a secret, and a man-hating former queen — but you can push them to change or adjust their attitudes. They’ll ask you for advice, and what you say affects how they’ll grow later on.

Yet another layer of decision-making comes when you have to choose your bride: Do you marry for love or for political power? Each race, except for the imps (who have a hilarious reason why she’s not there), offers one princess for your consideration. I chose the (both figuratively and literally) cold-hearted Camilla, a prominent lizard woman who is a judge in Rivellon’s equivalent of the Supreme Court. I learned more about her as she told me about her court cases, some of which I had direct influence over if she asked what I thought.

With so many choices stacked on top of one another, you can play the single-player campaign over and over and have slightly different experiences (new dialogue, consequences, plot points) every time. But as far as I can tell, all paths lead to one ending.

A seamless blend of genres

On paper, Dragon Commander sounds a little crazy: combine top-down strategy games with role-playing elements and a dragon that flies with a jetpack. I don’t know what kind of programming magic Larian Studios used, but it found a way to make it all work. The turn-based system is split into three distinct phases: spending time on your ship, moving wooden pieces across a huge board, and fighting enemies in a familiar RTS-like setup. But here, you don’t harvest resources. The number of units you make in battle depends on a country’s population and any citadel structures that you capture. If you don’t want to fight, you can send in one of your generals to automatically resolve it.

While it’s possible to overwhelm your enemy by sheer force, it’s smarter to leverage your armies’ individual strengths and weaknesses, like using the fast Hunters to capture buildings or turning on your Warlocks’ invisibility cloak to set up an ambush. If you see them in trouble, you can immediately transform into a dragon and start breathing down fire at your enemies and restore life points to any injured allies. The jetpack lets you zip around the map at insane speeds if you need a quick getaway or if you’re just scouting a base.

In multiplayer, battles feel a lot more hectic. Skirmish lets you dive into a fight right away, but the main draw is the multiplayer campaign, which plays out like a giant virtual board game with your online friends. Up to four players compete to conquer countries on new multiplayer-only maps. It’s one thing to watch the computer try to outwit you, but having real people behind those moves makes it even more nerve-wracking.