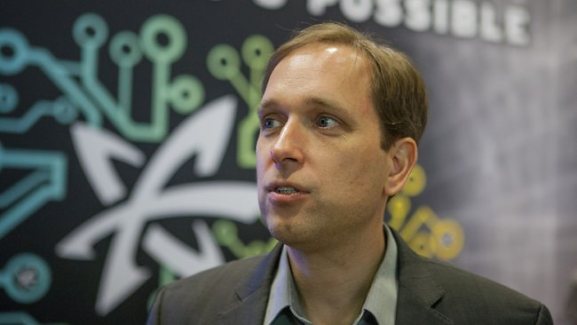 When Fusion-io chief executive David Flynn departed in May, the storage company’s stock took an immediate hit, falling 19 percent. Now we know what all the upset was for.

Flynn’s next move is a startup, Primary Data, which will be focused on solving tricky storage problems for software companies, the Wall Street Journal reports. Flynn’s cofounder Rick White is also a Fusion-io veteran, who left the larger company around the same time.

The details around Primary Data and its customers are still murky. However, Flynn revealed today that his team is building software to pool storage directly attached to servers as well as storage networked to servers and to offer a unified file directory namespace.

“The data is trapped within these islands or pools,” Flynn told the Wall Street Journal. “What we are doing is making it possible to share data across the infrastructure.”

Fusion-io makes products in cloud computing, big data, and virtualization, and it went public in 2011. The Salt Lake City, Utah-based company was among the first to import the flash-storage chips used on iPhones into the data center. Its other claim to fame is that Apple cofounder Steve “Woz” Wozniak joined the company in 2009 as its chief scientist.

In the wake of Flynn’s departure, board member Shane Robison was named chairman, president, and CEO. Robison left HP in November 2011, shortly after Meg Whitman took the reins as CEO.

Flynn incorporated Primary Data in June, just a few months after Fusion.io reported its quarterly earnings had taken a hit. The vendor experienced a big 27 percent drop from last quarter’s revenues. However, on a more optimistic note, the company has made a series of strategic acquisitions lately and recently announced two new customers, Spotify and Box.