The silliest of stories

For four years of work, you have to wonder how much time PopCap spent coming up with the script. Plants vs. Zombies 2 has quite possibly the worst story I’ve ever seen in a video game. Fortunately, it’s meant to be funny, and sometimes it is. But most of the time, It’s trying to be funny and not succeeding. Dave, your crazy neighbor with a cooking pot on his head, is back in the new game, and he initiates the mayhem because he eats a taco. That taco is so delicious that he wants to eat it again, so he fires up his time machine so that he can rewind time to just before the moment when he ate the taco. Instead, the time machine — named Penny — takes you back to ancient Egypt, where you have to battle zombies on your lawn. Penny and Dave keep up a banter that will drive you nuts. It’s all tongue-in-cheek, but I almost wish that PopCap took this part of the game more seriously.

Some players will like the replayability, and some will get bored with it. You can conquer the 11 levels in the Ancient Egypt world or the 10 levels in Pirate Seas world fairly quickly. But you’ll have to earn a variety of items on side quests to pick up extra points. Those extra points, including Keys and Stars, are essential to unlocking more content and getting enough currency to make a leap into the next world.

You’ll have plenty of reason to go back over the same territory. That’s a good way for the game designers to deal with the memory limitations of a device like an iPad or iPhone. But it can be frustrating as well because you’ll eventually get bored playing the same maps over and over. And this game is so difficult at times that you’ll have to play a number of levels over and over again.

The urge to monetize

You won’t have to pay for anything if you don’t want to. But the temptation always lingers, and it may annoy you. I found that the easiest way to make the best progress was to head straight to the in-app purchase menu and get yourself some virtual gold with real money. That may help the monetization, but you’ll wind up with a lighter wallet if you resort to buying your upgrades rather than earning them.

The deeper you get, the more you realize that you need to get rewards dubbed “Stars,” which help you progress to other levels, and “Keys,” which let you through locked doors for more missions and Stars. That means you’ll have to replay past missions so that you can get a higher score and earn your Stars.  During these retread missions, you’ll sometimes find it’s very difficult to earn the Star unless you invoke some of the divine intervention features, where you can purchase a lightning strike, to pinch the heads of zombies, or use your fingers to flick a zombie off the screen.

Those latter interventions are great fun. But they use up the gold coins you earn with each mission you complete. And when you run out of coins, you have to purchase them with real money. The temptation to do that is great, since sometimes the only thing that can get you past a difficult spot in the game is divine intervention. And that’s where the microtransactions will come in. You can still try to beat your head against a wall and try to win those coins on your own; after all, the guiding principle in free-to-play games these days is that you should not be able to buy your way to victory in a way that you can’t do via gameplay. But buying coins will shorten the time it takes to accumulate coins. PopCap says you can play 90 percent of the content for free.

Where’s the next world?

I found myself wondering why there weren’t more worlds in this time travel game. Those world’s are probably coming as future DLC, but it would have been nice to have a longer story-based campaign (as bad as the story was) and then balance that against the retread missions and side quests. It would be nice, for instance, to have more variety in night, fog, or water missions. If there were more worlds, the game would have felt considerably more different from the original. 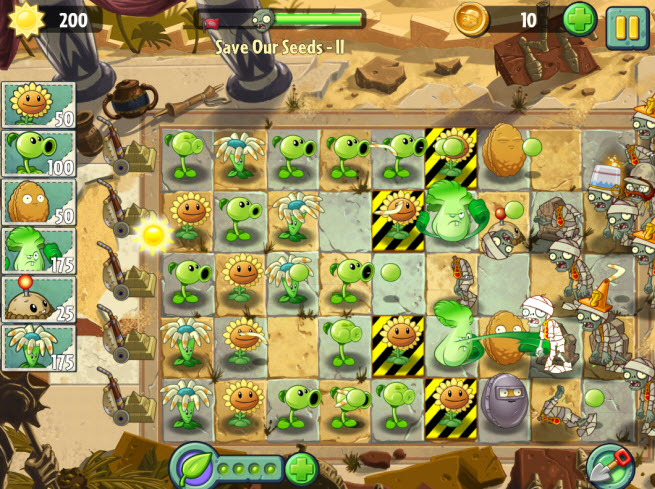 Above: Plants vs. Zombies 2. Save our seeds II.

The sheer variety of plants and zombie types will put you to the test. If you make a mistake or two in your plant selection or in countering an attacking zombie, you’ll pay for it. As a free-to-play game, Plants vs. Zombies 2 has its minor annoyances with monetization tactics. But it promises many hours of entertainment, and you’ll wind up playing this game a lot more than you should. There is no right way or wrong way to play the game, and you can mix and match your plant combinations in an almost infinite number of ways. You can stall the zombies, or try to take them out early in their march. You can try to blast them out of one lane, or take them out in multiple lanes. You’ll probably wind up with a favorite roster of your usual plants, but you’ll have to try everything to succeed against all attackers.

It is a rare title that all generations or genders of players can enjoy. I heartily recommend it, as there are no rotten vegetables in this game. 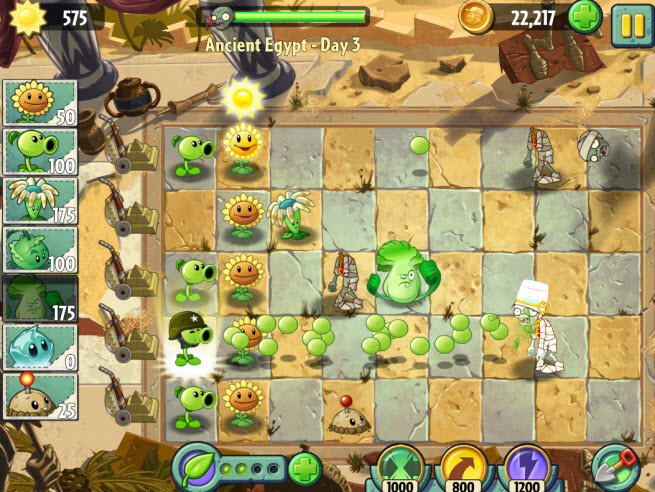