The Doge of Venice sat in his hall, contemplating his next move. Enemies crouch all around Venice. With the backing of the Austrians and the Holy Roman Empire, the Doge found himself having to give up conquests made over the Milanese, even though Milan started the war in the first place. The Austrians, in alliance with a number of smaller, but still Germanic, kingdoms, coveted the Doge’s territories on the northern border. And his merchants — the backbone of Venice’s strength — were struggling abroad.

How the Doge handles each of these choices will decide whether Venice would remain a free mercantile republic or a vassal of a larger empire. These choices define Europa Universalis IV, giving you plenty of freedom to shape the destiny or doom of your empire. You make your decisions in real time, managing the administration, culture, diplomacy, expansion, military, and trade of your kingdom, and in the fourth edition of the grand-strategy series from publisher Paradox Interactive and developer Paradox Development Studio, out now for the PC and Mac, you have more, streamlined tools to help you do so.

Even with the added help, Europa Universalis will confound — but in the “What the bloody hell just happened?!” way in which you’re a little confused but also a little impressed over what has just happened. 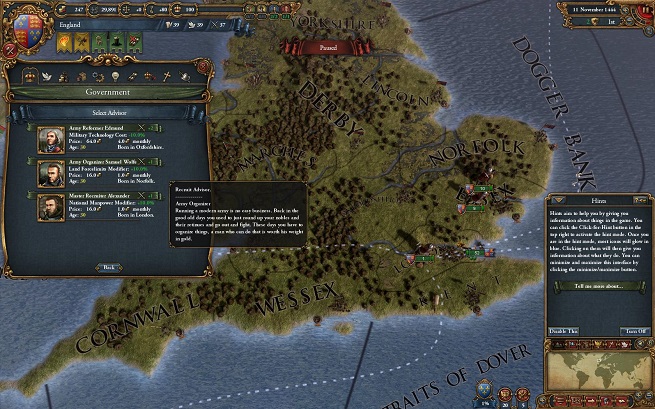 Above: Advisers boost your administrative, diplomatic, and military point pools.

Points in its favor
As time passes in Europa Universalis IV, you gain points — monarch power — that you can use to advance your administrative, diplomatic, and military goals. This may sound like something standard for a strategy game, something that you’d take for granted would be there, but players of the series won’t, because it’s the first time monarch power has appeared in the franchise (it’s a mechanic brought over from Paradox’s 2012 grand strategy hit, Crusader Kings II). And boy, do they help you manage your empire.

You can use your administrative points to boost your stability, reducing the odds of a rebellion. Those diplomatic points come in handy when you’re trying to convert a conquered province to your empire. They can also change the culture of provinces, making them more suitable for your kingdom’s values (though I can’t help but think of “ethnic cleansing” in the back of my mind; I hope this is achieved in-game via intermarriage and the absorption of culture, not the forcible removal of it). And you use all of these points to unlock National Ideas (the Europa Universalis tech tree) and the technologies that lie within them.

These points are also tied to your advisers — the more skilled your adviser (administratively, diplomatically, and militarily), the more bonuses you receive to the growth of these points. Highly skilled advisers cost more in coin and maintenance, but they give you better benefits. (And they die as well as time passes.) The capabilities you unlock through National Ideas also help determine the growth of these point pools. And this is also where some of the most interesting choices come in Europa Universalis IV: Do you hoard your administrative points to access better National Ideas, or do you spend your bureaucratic capital on boosting your realm’s stability? Your military points help in repressing rebellion, but they also help you unlock better units. This give-and-take is one of the most fascinating aspects of Europa Universalis IV, and I look forward to many hours of finding which National Ideas and advisers best fit my playstyle.

I also like how you receive missions; it’s nice to have some more concrete goals than just, “Hey, let’s dominate the world.” Some are pretty easy — like beating up on a neighboring state — but others can be a challenge. Hungary is a natural rival of Venice, but one mission I received asked that I boost my relations to them to “100” — and I was at a level below zero. This gave me one more goal to strive toward as I sought to dominate trade in the Mediterranean, and the rewards from missions helped me accomplish my other, more long-term goals. 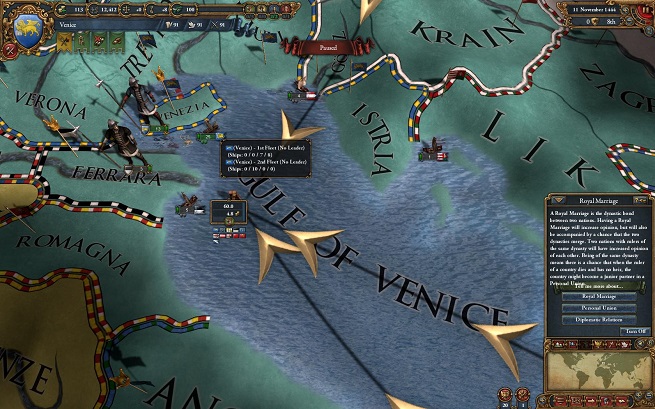 Above: Look at the ducats flow into Venice.

Image Credit: Look at all them ducats flow into Venice.

Trade nodes
In the past, trade felt neglected in Europe Universalis. But the changes to the trade system make playing merchant powers like Venice not only a viable strategy but fun as well.

Trade flows through “trade nodes” located in important areas of commerce (think places like Venice or Alexandria). With the trade nodes, you want to send as much trade flowing to you as possible. You can even see arrows in the economic map flow out of trade nodes to the realms that are controlling these key commerce locations. Merchants help you steer trade to your kingdom, and now your navy helps you protect this trade.

While I wasn’t able to win with the “trade first” strategy — the thrice-damned Austrians, Swiss, and Milanese ganged up on my Venice — I had a great deal of fun seeing if I could bend the trade winds of Europe (and ultimately the rest of the continent) to my will. 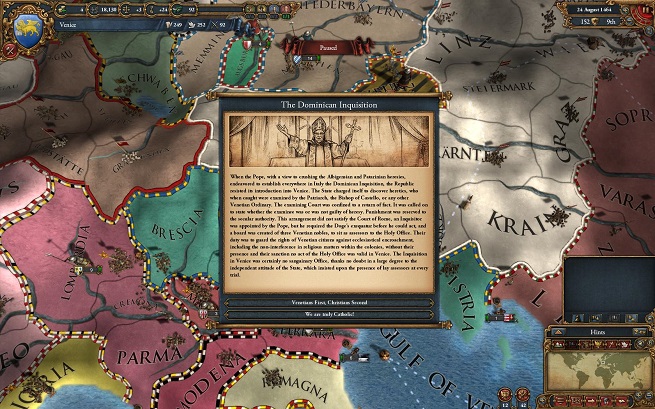 Living history
One of my favorite aspects of historical strategy games is, well, the history. I started my first run as England, and it didn’t take long before one of the most important events of that period kicked off: the War of the Roses. In that classic conflict, I played the Lancasters holding off what turned out to be the rebellion of Richard III. But the War of the Roses did little to cement my control over England — I continually faced rebel opposition for four decades, either coming York holdouts or Welsh loyalists, who seized on the chaos to declare their independence. And as I dealt with these numerous rebellions, I didn’t have the power to keep my holdings across the Channel on the French coast, losing several provinces and barely holding on to Calais.

What’s great about Europa Universalis is that while history may be the backdrop, what comes from the events is your story. We know history worked out differently for England — the kingdom went on to become the strongest power in the world. But embroiled in rebellions and losing prestige on the continent, my England would be just a footnote on the world stage in this playthrough. 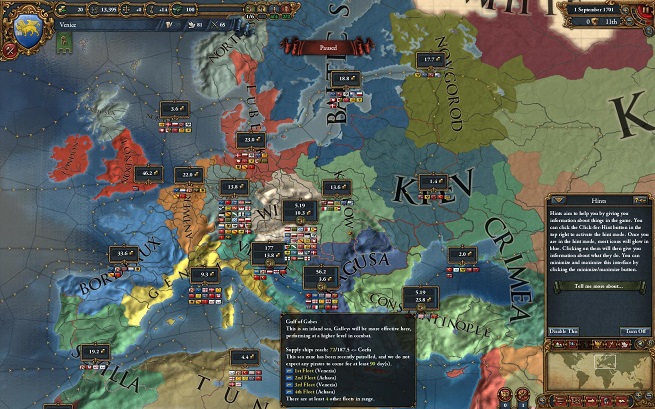 Above: The World Trade map can be a little … daunting.