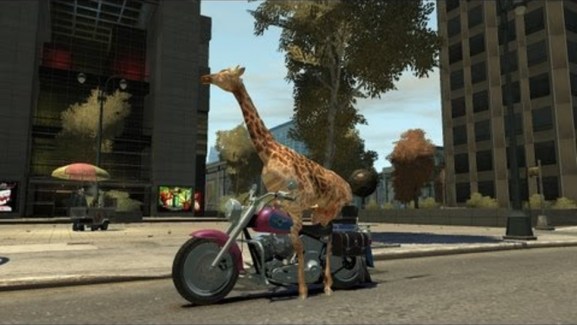 A giraffe rides a motorcycle in Grand Theft Auto IV just 'cause.

Rockstar Games has a ton of creativity and vision. The Grand Theft Auto developer is capable of creating living, breathing open-worlds with tons to see and do.

On Sept. 17, Rockstar will release Grand Theft Auto V on Xbox 360 and PlayStation 3 … but not the PC. That’s a damn shame. You know why? Because of motorcycle-riding elephants, Sonic the Hedge-Hog, and Iron Man.

As brilliant and expansive as the official Grand Theft Auto games are — and as much as I can’t wait to play GTA V — Rockstar just can’t compete with what its fans do to the game with mods after its release. Those mods are only possible on PC, and they add an extra layer of insanity to the already pretty crazy franchise.

I’ve gone ahead and collected some of the most insane examples of why we love Grand Theft Auto on PC as a way to remind Rockstar what the PC crowd is capable of. Here’s why we love GTA on PC:

The aforementioned elephant riding a motorcycle is probably my favorite thing ever, but it’s also only the beginning. Humans love animals, and so it’s only right that we put our four-legged friends in the starring role of some of the best GTA mods.

The Grand Theft Auto-modding community created add-ons that feature an elephant, a horse, and a shark. Check them all out and more below:

Above: An elephant riding a motorcycle. Can you even handle it?

“I’m Batman.” Michael Keaton struggled to say those words to Vicki Vale in the 1992 Tim Burton film Batman. I, however, do not struggle to scream those words at my monitor as I drive around Liberty City in the Batmobile and bust up criminals. To live like I do, you’ll of course need a Batman character mod, a Batarang, and the Batmobile itself.

Batman isn’t the only superhero you can gallivant about as in Grand Theft Auto. Check out some of the best below:

Again, Rockstar does great work. It makes interesting characters that I love spending time with. Occasionally, however, I do get a bit tired of the Nico Bellics and the Tommy Vercettis. Sometimes I’d rather just play as Solid Snake, Link, or Sonic the Hedgehog. Others might enjoy exploring the world as Naruto or one of the WWE superstars. Thanks to the modders, we can play as any of those and more: 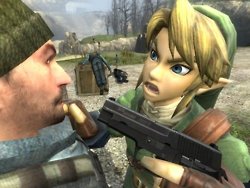 Above: Link will strike you down with great vengeance and a furious anger.

Back to the Future

Batman is cool, and I like Sonic, but the Back to the Future mods for Grand Theft Auto IV deserve their own section. This is a series of mods that enables gamers to play as Marty McFly, Michael J. Fox’s character from the classic films. It also gives players a functioning Delorean time machine … as in it will really travel through time when you hit 88 mph.

These mods feature the following:

Check it out in action below:

This requires a series of mods to get fully working with the time traveling and everything. Here’s the full list:

Of course, you don’t have to live with those half-decade-old visuals if you don’t want. Instead, you can install the latest photo-realistic mod to make GTA IV look nearly as good as Grand Theft Auto V:

You know, I’ve always wanted to take a leak in a Grand Theft Auto game. I just want to get San Andreas’ C.J. super-drunk and then make him stumble out into the alley to take a pee. That would really tie the whole world together for me. Once again, the modders have answered my prayers and created a plug-in to make that dream come true. In fact, players can do all kinds of stupid things: 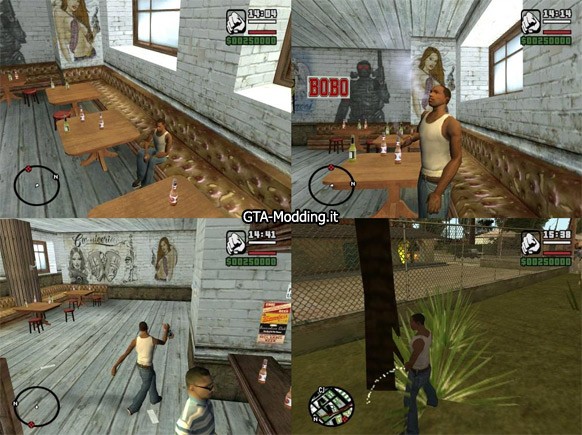 Above: Gamers can finally enjoy the finer things in life with this mod. It enables C.J. to smoke, drink, and pee.