LOS ANGELES — Activision Blizzard promised that Call of Duty: Ghosts would be a big leap forward in next-generation gaming, and it’s hoping to prove that today with the unveiling of the game’s multiplayer combat mode.

In an event livecast around the globe, Activision showed the nuts and bolts of what it hopes will be the next blockbuster in a modern combat video game series that routinely sells in the $1 billion range in the first two weeks after its launch, every November, every year. We are live at the unveiling at the sprawling L.A. Live theater in downtown Los Angeles.

Ghosts is arriving amid a difficult competitive environment this fall. Activision Blizzard, which is in the process of buying out majority shareholder Vivendi for $8.2 billion, acknowledged that it faces more competition in the second half of the year than usual. Chief executive Bobby Kotick has promised to spend more on sales and marketing to preserve the leadership of Activision’s top franchises, including  Call of Duty. Part of that was spent today, as Activision set up a huge tent for 250 press.

Eric Hirshberg, chief executive of Activision Publishing, came out on stage after a countdown ran out. He said Call of Duty has become an institution and that the new multiplayer will give you thrills like “your hair is on fire.”  He promised that Call of Duty: Ghosts multiplayer will be built on character customization of your soldier, with many more options to express yourself. It will also be built on a world that is dynamic, where the map shifts under your feet.

“It gives new meaning to the phrase, ‘I gotta learn the maps’,” Hirshberg said.

There are seven new game modes, 30 new weapons, 20 new Killstreaks — all fueled by a next-generation game engine, he said. You’ll also be able to take Call of Duty anywhere. You can carry your profile from place to place or machine to machine. Your stats will carry over if you upgrade from the Xbox 360 to the upcoming Xbox One game console.

He showed a trailer of the game to the soundtrack of a new Eminem song, “Survival,” coming out this fall.

“I’m sure you’re getting excited about Ghosts,” the rapper said in a video. “I am, too.”

One of the cool new features of multiplayer customization is that you can now design your avatar to look like yourself. And yes, you can finally be a female soldier.

Among the new perks: You can call in your guard dog, Riley, who can warn you when enemies are near.

There are no more death streaks. You can customize a single soldier, but you can also create a squad of up to 10 soldiers, each one that is different and each one with its own set of achievements. There is one level of prestige per soldier, and 10 levels of prestige. Prestige represents the level when you max out on all of your upgrades.

Meanwhile, Disney is readying the launch of Disney Infinity, a hybrid toy and game product that will challenge Activision’s $1 billion Skylanders business. And Electronic Arts has improved the quality of its narrative and dramatic combat in the upcoming Battlefield 4, the main contender against Call of Duty. And new game franchises such Ubisoft’s Watch Dogs will also compete for consumers’ dollars. With the launch of Microsoft’s Xbox One and Sony’s PlayStation 4, the competition for the consumer’s dollar has never been more fierce.

Ghosts will have a brand-new world and single-player story for Infinity Ward, which stuck to the same universe for its last three Modern Warfare games. The studio also rebuilt its graphical engine from the ground up to get the most out of the Xbox One and PlayStation 4. Among the details highlighted so far are underwater combat and a companion dog that can operate in stealth and rip out the throats of enemies. The game features much more stealth than past games, as the U.S. is no longer a superpower after being hit by a huge disaster.

This multiplayer revelation is especially interesting considering how well the last Call of Duty game, Treyarch’s Black Ops II, caught on with professional competitive gamers. Black Ops II is one of Major League Gaming’s main events. Many pro players are waiting to see just how drastic a change Infinity Ward is gong to make and whether it will actively court MLG and other competitive players. Last year, Activision brought in the press to see the game’s details first. But this time, it is sharing it across the globe in an effort to stir even more excitement.

Call of Duty: Ghosts leads the pack in preorder demand for fall games based on a new report from analyst firm Cowen & Co.

The 2013 Cowen Video Game Odometer shows that Activision Blizzard’s latest Call of Duty, which debuts in November (that’s just 15 weeks from now). But the inaugural version of the odometer gave Call of Duty: Ghosts a score of 73, which means it is on track to sell lower than the 100 score for last year’s Call of Duty: Black Ops II title, which sold $1 billion in 15 days. Cowen, a Wall Street equity research firm, said the metric is designed to give insight into video game sales a few months ahead of time.

The publisher wants to migrate 40 million gamers who are playing Call of Duty: Black Ops II and other titles over to Ghosts. 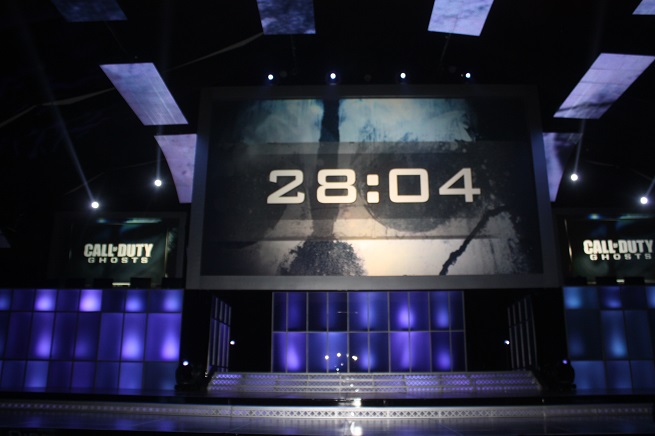