It’s no surprise that the biggest struggle for app developers in 2013 is monetization. The industry evolves year by year, but little has changed since the app stores launched. Apps have flirted with different monetization models (premium, paywall, and subscription) before finally settling on freemium.

As the name suggests, freemium is a model wherein developers give away their app for free, and it’s far and away the most successful these days. Thirty-eight of the 50 Top Grossing apps on iOS use the freemium model, compared to 8 nongame subscription models (the New York Times, Major League Baseball, and such), and four conventionally purchased games. On Android, 48 of the 50 Top Grossing are freemium games, with one subscription-based game and an equally lonesome premium game.

So, how can freemium games so reliably top the grossing charts? These games bring in revenue through a combination of payments for virtual currency and goods.

The most difficult part of any monetization model is getting people to convert to paying customers. At NativeX, a leader in native in-app advertising, we’ve seen that in most games only 5 percent of players will ever make an in-app purchase. How do developers monetize the remaining 95 percent? That’s where ads come in.

Unfortunately, the problem with in-game advertising is that most of it is genuinely bad. We’ve all experienced an app that constantly prompts you to buy more coins, run a credit check, or buy something you don’t need. Mobile ad networks make the problem worse by finding new ways to spam users with push notification ads and icons plaguing the home screen. It’s no wonder consumers and developers are fed up with ads!

I suggest that when done correctly, consumers are willing to tolerate—and in some cases even enjoy—advertisements. But what does “correctly” mean? Here’s our take:

1) Avoid spammy networks. High click-through rates with push notifications are meaningless, as app uninstall rates will also shoot up in the long run. Most consumers will immediately remove the offending app once they’ve notice its icon undergoing download. Consumers are willing to tolerate in-game ads for free content, but ads that start showing up outside of the game are crossing the line. Google agrees; late last year the company banned intrusive advertisements.

2) It starts with relevance. Showing Viagra pills to a teenager and hiking expeditions to a 90 year old is stupid. Unfortunately, that’s how sophisticated today’s average mobile ad network is. They have no idea who that user is, what they’re into, and which types of apps they enjoy. Yet the mobile advertising industry is slowly evolving. For example, NativeX recently announced new demographic targeting giving advertisers the capability to advertise through specific apps based on the demographic they are known to attract: age, gender, income, education, ethnicity, and so on. With NativeX, advertisers can put their ads in front of the right audience.

Despite the depth of insights provided by NativeX, the technology is built on anonymous self-reported surveys that compile information on a given game’s audience. Moreover, Native X never collects or shares personally identifiable information.

“Native advertising lies somewhere in bridging the divide between content marketing (a pull strategy) and plain, old-fashioned advertising, which is interruptive. Somewhere in its definition is probably the fact of paying for space or time (the “advertising” part). The “native” part means it is organic, conducive to the user experience, non-salesy, and offers some sort of value in and of itself as an ad (entertainment, education, or utility, for example).”

But what does native advertising look like in mobile? How can publishers create value with scale? Here are a couple successful examples: 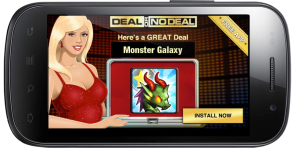 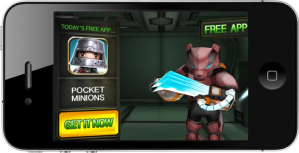 Developers have always had a love/hate relationship with advertising. They love the dollars it brings in but hate the experience it creates for the user. By steering clear of spammy implementations, targeting your demographic, and evolving the ad experience, developers can find the illusory “win-win.” While some may not be convinced, there remains a lot of money for those willing to think strategically about monetizing the 95 percent.

Justin Mauldin is the director of marketing communications at NativeX. He has worked for a variety of Fortune 100 advertising and marketing organizations including PapayaMobile, Apple, and First Advantage developing their brand management, global strategy, and marketing strategy. Justin received his bachelor degree in marketing at California State University, San Bernardino and his MBA in sustainability at Duquesne University. He is also a passionate photographer and has two wiener dogs named Ketchup and Mustard. You can follow him on Twitter and 500px.