I knew what to expect when I started Saints Row IV.

Developer Volition’s 2011 hit Saints Row: The Third is a celebration of brash and stupid humor with solid mechanics and a good variety of activities. Saints Row IV is just that with superpowers.

The sequel (due out Aug. 20 for Xbox 360, PlayStation 3, and PC) has players controlling the unnamed, fully customizable President of the United States and leader of the Saints gang. Just about an hour in, a few minutes after curing cancer or ending world hunger (the player gets to choose), aliens invade Earth and imprison the President and his homies in a virtual Matrix-like version of the Saints’s hometown of Steelport. In this simulation, the President can unlock superabilities and must use them to rescue his friends.

So, yeah, like I expected, this is just Saints Row: The Third with superpowers … only it’s not. It’s more than that. Saints Row IV is a game built by people that love it, and it shows in every mission. It isn’t just a collection of open-world objectives strung together with lewd jokes and pop-culture references — although it has those. This is a game that wants you to care about its careless sociopaths, and it works.

Deep into Saints Row IV, I already knew I was playing a very funny game, but I muttered a soft “uh, oh” as I came to a moment where I thought the writers were going to try to get away with repeating a joke from Saints Row: The Third. I don’t want to give it away, but it involves a sing-a-long between a couple of characters. I nodded along knowingly and chuckled, but I was also disappointed that the developer was trying to cash in on a cheap throwback … but somehow, by the end of their second karaoke routine, I was in stitches.

The joke took an unexpected turn and surprised me.

And that’s the best way to describe Saints Row IV: Even when it does go back for the cheap gags, it nails them because it is almost always going to take an unexpected turn and surprise you.

It’s jam-packed with jokes. I typically love causing chaos and futzing around in open-world games, but I couldn’t stop jumping into the next mission because each one does something funnier than the last. Whether it’s participating in amateur strip night at Technically Legal, running around as a toilet made out of ASCII graphics, or watching as a character realizes she hates her past self, Saints Row IV is relentlessly entertaining. It’s impossible to pick a favorite moment. 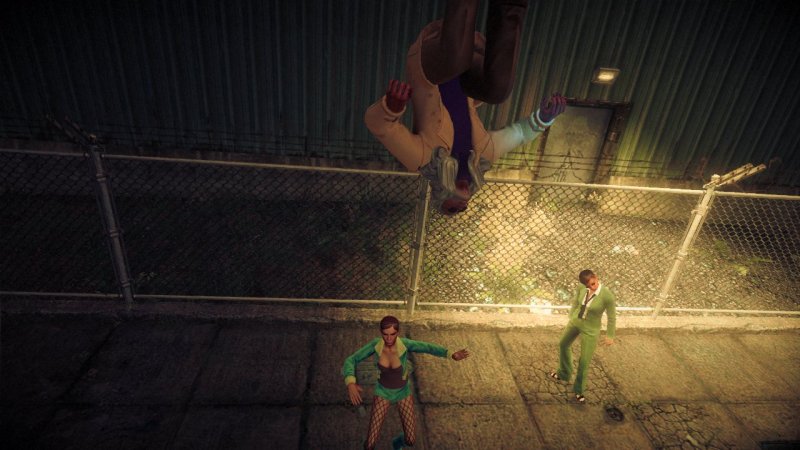 I can’t believe I’m even writing this, but I actually care about the characters in Saints Row IV. Yes, this is the dumbest game I’ve ever played (in a good way), but the developers obviously love the universe it built.

Saints Row IV’s story structure actually closely mirrors that of BioWare’s Mass Effect 2. You have to gather your crew. Once you have them, they spend most of their time on a spaceship (where you can also “romance” them, which is an incredibly weak euphemism for boning down). After you rescue an individual, you can go on “loyalty” missions with them.

The rescue and loyalty missions are both hilarious and revealing.

For example, to rescue Shaundi — a long-time member of the Saints gang — the President must help her escape her worst memory, which is a flashback to her role in Saints Row 2 as a college burnout hippie.

Present-day, bad-ass Shaundi meets past Shaundi and the older character despises the younger her for acting ditzy and crazy for pot. It’s at once a funny take on adults who look back in shame on their youthful indiscretions and a sharp commentary on the Saints Row series itself.

Later, during their loyalty mission, the two Shuandis bicker with each other until reaching some acceptance after murdering their ex. Without giving too much away, it was a subtle moment that efficiently illustrated an adult coming to terms with her past.

None of this is overwritten. It’s all peppered in between the explosions and the laughs, and it really buoys an already exuberant experience.

If you lack a sense of humor and the capacity to grok human speech, you’ll probably still have a pretty great time with Saints Row IV. The big gameplay improvements this time around are the superpowers. The President can still steal cars and shoot guns, but he can now also jump over buildings, glide, and run so fast that he creates a tornado in his wake.

This makes traversing the world a joy. This isn’t anything new. We’ve had superpowers in open-world games since 2007’s Crackdown from developer Realtime Worlds. As in Crackdown, hundreds of collectibles — called data clusters in Saints Row — litter the map and improve the President’s powers.

I spent a few hazy hours jumping and gliding around collecting every data cluster I could see. When that got stale, I started jumping into the numerous events that dot the world. Missions include stealing virus-infected cars and throwing the President into traffic to collect insurance.

As I started finishing story missions, I began unlocking even more events on the map.

Saints Row IV will never leave you wanting. Want to do a driving mission? It’s got those. Want to race around on foot like the Flash? Do it. Want to fight off waves of enemies in a horde mode? That can happen.

Every completed mission and event feeds back into your character’s level, which unlocks more capabilities. You can then pay to gain those abilities using the aforementioned data clusters. This progression continues throughout the entire game. You’re always unlocking additional powers, and they’re all useful.

The result is a world that is fun to explore, packed with stuff to do, and constantly rewarding you for having fun.

Saints Row IV’s soundtrack is pretty amazing on its own. You can dial-up its handful of radio stations at any time using your in-game phone, and it’s wonderful to beat up an army of aliens while blasting Stan Bush’s “You’ve Got The Touch” from 1986’s animated Transformers: The Movie.

As great as those natural musical moments are, the scripted moments are even better.

Saints Row IV crashed three times for me. I’m playing the Xbox 360 version. A colleague playing the PC version confirmed that he also experienced some bugs but no crashes.

The crashes, which completely locked up my system and required me to manually turn off the console, were by far the biggest issue, but I also got stuck on the map once and had to restart a mission.

I also had persistent audio bugs. I frequently performed actions that produced little to no sound effects.

None of this hurts the game very much for me, but I’m not someone who is too thrown off by bugs. Two of the three crashes caused me to lose some progress, and that’s frustrating, but it was a total of about two minutes of gameplay.

Weird and lazy save system

Speaking of polish, the save system is also pretty rough.

I would occasionally need to save and quit my game in the middle of a mission. You would expect that the game would save the progress up until the last checkpoint, but it doesn’t. If you save and quit within a mission, you will lose all of that progress and have to start over.

It makes no sense and is frustrating. Thankfully, the game is a blast to play, so having to go through a few checkpoints usually isn’t too much of a headache.

The cliché for open world games since Grand Theft Auto III is always that they are jacks of all trades and masters of none. Well, Saints Row IV is a jack of all trades and a master of a few of them. It’s blazingly funny, it’s locomotion is best in the genre, and it doles out progress in a way that feels just right.

I have a great affinity for this game, and I think that’s because the people that made it really care about the world and its characters. I don’t want to pretend like the big draw here isn’t the silly and insane humor — that’s why you need to play this game — but its action, its variety, and its character moments will drive you to love it.

The truth is that while this is a game about a gang of sociopaths killing thousands of enemies and collecting a bunch of stupid blue things that give them magical powers, it’s secretly about a gang of puckish rogues that care deeply for one another. It’s admirable that Volition even attempted something like that. It’s astounding that it succeeded.

Saints Row IV will release for Xbox 360, PlayStation 3, and PC on Aug. 20. Publisher Deep Silver provided a retail copy of the game for Xbox 360 for the purposes of this review.