Gone are the days when Quake and Duke Nukem dominated computers, but developer Flying Wild Hog and Devolver Digital aren’t done with fellow first-person shooter Shadow Warrior. This fall, they’re taking out the offensive stereotypes and controversial content for a PC reboot.

The move risks neutering the property for fans, but based on my time with the title, it still has shock value — even among today’s more popular, violent shooters, its main source of competition.

“We’ve taken some of the core elements of the original — brutal katana combat, beautiful Japanese setting, frantic gameplay, and Lo Wang’s sharp tongue, and [we] reinvented them for 2013,” Michal Szutack, the studio lead at Flying Wild Hog, told GamesBeat.

I ventured into the new Shadow Warrior and found calming pools of water, cherry blossom trees in full bloom, and even a gentle white rabbit that led me through the woods. But it wasn’t long before blood was everywhere, staining exquisite furnishings red and marking a trail through an eerie and beautiful thicket of bamboo trees. One slice with protagonist Lo Wang’s katana can decapitate, dismember, and chop enemies into several chunks as fountains of blood erupt from their collapsing bodies.

But what makes this shooter worth revisiting now, even with the modern redesign? The genre and players’ tastes have changed a lot since 1997. “Really, it comes down to enjoying an action-heavy, fast-paced shooter with a story, setting, and characters that aren’t your typical postapocalyptic, space marine fare,” said Szutack. “Shadow Warrior is brutal, fun, and funny — something can sit back and really enjoy like we used to with FPS games.” 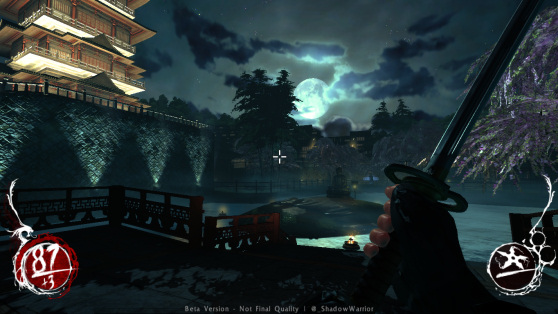 Above: Shadow Warrior, in a moment free of violence.

Much of the comedy comes from the banter between Lo Wang and a mysterious masked demon he meets early on. Koji lends Lo Wang his power — a deal that may carry a price later on — and players can pump different types of combat points into learning valuable skills and traits. Plenty of options are available, along with upgrades for weapons like a revolver, submachine gun, and crossbow. Guns come in handy as players often need to mow down waves of enemies.

Lo Wang himself is still cocky — and cheesy as hell. It starts out with him driving and singing along to Stan Bush’s “You’ve Got the Touch” (the one recorded for The Transformers animated movie). At one point, I even heard him drop “Cowabunga!” — a Teenage Mutant Ninja Turtles phrase that Lo Wang slung in the original game and just one of many references back that you’ll encounter.

Taking a classic shooter and priming it to survive in today’s fierce market is no easy feat. “The biggest challenge was taking the characters, settings, and more iconic weapons and transferring them to something that wouldn’t feel like empty nostalgia,” said Szutack. “We needed to make something that tapped into that history but could stand on its own as well.”

Szutack said he wants newcomers to learn and experience what it is to play a classic first-person shooter, but Flying Wild Hog isn’t alienating longtime fans.

“It’s fast, it’s funny, and it’s sexy to look at and play,” he said. “That’s what we loved about the original, and that’s the essence we are have reinvigorated in our new take on Lo Wang and his exploits. Fans of the original game should expect a new experience but one that is grounded in what made the original so memorable.”

Shadow Warrior is missing one element that it had back in the ’90s, though: multiplayer. For FPS players today, that’s a big deal, but Szutack isn’t convinced that it’s necessary. 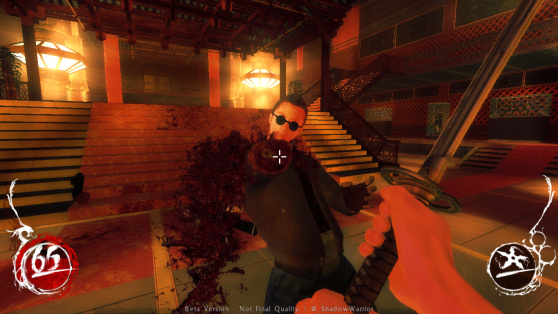 Above: The katana can split enemies in a number of ways.

“The team wanted to make a strong single-player experience with an engaging story and spectacular gameplay,” he said. “Anything after that is just trying to hit stale marketing bullet points just to say you have them. … There are many shooters that are single-player only and even more that include multiplayer that less than 1 percent of their users play regularly.”

Shadow Warrior isn’t some dinosaur, either, outdated beyond relevance. Younger players can have fun with it, and Szutack says they’re already playing games that are similar.

“Classic twitch FPS games have always been worth playing — series like Serious Sam, Bulletstorm, Painkiller, [and others] have been carrying that torch, and each had their own unique take on the subgenre,” he said. “What we’ve tried to do is find a nice blend of more classic tenants of old-school shooters like fast-paced action, a huge arsenal at our disposal, and a tough-as-nails challenge with some new twists like the melee combat, character, and weapons upgrades and vastly improved visuals, physics, A.I., [and so on].”

If you’re hesitant about pushing that preorder button, Szutack said this isn’t the same situation as Duke Nukem Forever, where fans waited over a decade for a sequel that ended up an embarrassment.

“Duke Nukem Forever was more of a product of an unprecedented development path that probably led to some archaic designs making their way into a game released 10 years [later],” said Szutack. “The elements I mentioned earlier — finding that balance between the classic and the modern — are what will make Shadow Warrior feel like a game that harkens back to the golden age of of FPS games but doesn’t feel out of place today.” 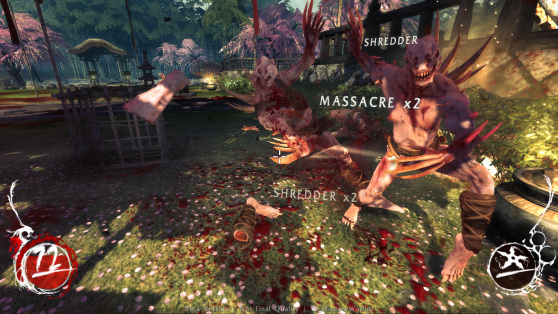 Above: Players earn "karma" points, which they can use to increase Lo Wang's strength and abilities, by demonstrating creativity in combat.