I was in a bad place. My health was low and my noise makers failed to distract the armored soldiers, who were just a few feet away looking for me. All I had left was a smoke grenade. I tossed it in their direction and ran toward the extraction point, hoping to God they didn’t see me.

I’m not that good at stealth games, but I appreciate the ways Splinter Cell can make me look cool while I hastily retreat from a botched mission.

Out on Aug. 20 for the Xbox 360, PlayStation 3, Wii U, and PC (I reviewed a prerelease version for the PS3), Tom Clancy’s Splinter Cell: Blacklist is the sixth game in Ubisoft’s long running stealth-action series. It’s also the first big game for Ubisoft Toronto, a new development studio which the publisher established in 2009. In Blacklist, agent Sam Fisher has graduated from the School of Lone Wolves to become the leader of a new SpecOps group, Fourth Echelon. A terrorist organization called The Engineers has emerged with the Blacklist, a series of planned attacks against major American cities. Fourth Echelon must travel around the world to stop them before it’s too late.

With a new direction, a new development team, and even a new voice (Ubisoft replaced Sam Fisher voice actor Michael Ironside with Eric Johnson), Splinter Cell: Blacklist is the biggest change the series has seen in quite some time. But are these changes all for the better? 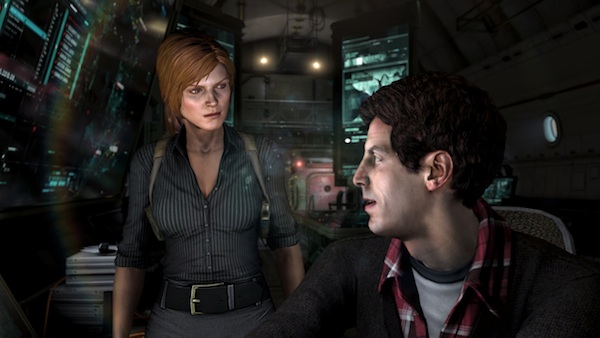 Above: Anna Grímsdóttir (a.k.a. “Grim”) is back wor/.king with Sam in Fourth Echelon. Newcomer Charlie Cole is the team’s tech expert.

Right from the get-go, Blacklist presses you for time. A countdown to the next wave of The Engineers’ attacks is always visible inside the Paladin, a large airplane that serves as your main HQ. Some missions have a time limit. But none of that compared to the pressure I felt when hearing the sound of Fisher’s alarm. When someone is close to spotting you, a curved red bar appears on-screen, triggering a harsh beeping noise that only gets worse as the bar fills up. As long as you hide from or kill that person before it’s complete, you’re still safe in the shadows. By the end, this must have happened at least 100 times, but those beeps never failed to stress me out.

Actually, that’s the way I felt about Blacklist as a whole: stressful as hell. You have to keep moving, alternating between hunting and hiding from your enemies. Blacklist lets you complete levels any way you want — you can try to play it as other third-person shooters and go in with your guns blazing — but the systems in place definitely favors the stealth approach and all the potential frustrations that it entails.

Nothing is more devastating than seeing your pre-planned stealth route crumble because of a silly mistake. But that also makes the moment-to-moment gameplay all the more thrilling. It’s satisfying to somehow salvage your old plans and turn it into something new, like when I took revenge against one of my spotters by luring him in with a noise maker, slicing his throat when he got close, and then taking out his crew with my slo-mo execution shots.

The return of a prescient multiplayer mode

Though Blacklist brings back the fan-favorite Spies vs. Mercs asymmetrical multiplayer mode in a few different flavors, the goal remains the same: Spies (played from a third-person view) have to carefully use the shadows and their stealth abilities to avoid confrontation with the heavily armored and lethal mercenaries (played from a first-person view).

I never played the original Spies vs. Mercs, so I wasn’t sure what to expect in the 2013 version. After climbing through vents and coordinating hacking plans with my teammates on the spy side and blowing up the sneaky bastards on the mercenary side, I finally figured out why people like to talk about it so much: It’s refreshing. It’s not about who has the highest kill-death ratio or whoever can grab the most overpowered weapon first. Spies vs. Mercs encourages you to outsmart your opponents and to actually work as a team.

Instead of a traditional menu screen with different game modes or options to choose from, you access everything from Fourth Echelon’s Strategic Mission Interface (SMI), an interactive map where you can browse missions, online challenges, and multiplayer modes. So whenever you fire up the SMI — either through the Paladin or with a wrist band when you’re on the ground — it makes sense within the context of the story.

To take the immersion one step further, Ubisoft kept the environmental clues from Splinter Cell: Conviction, which are gameplay messages (displayed across objects like buildings or even the night sky) that tell you what to do next. Video footage from the SMI will also play on walls and other surfaces as Fisher’s team feeds him information. Since you never really “leave” this world unless you’re going to quit the game, you always feel like you’re a part of the team, rather than just a curious outsider looking in.

The Paladin offers a glimpse into the relationships between Fisher and the rest of Fourth Echelon: the rookie (Briggs), the computer whiz and comic relief character (Charlie), and the voice in Fisher’s ear (Grim). Despite their high levels of clearance and access to all sorts of neat weapons and technology, they’re not necessarily the most functional anti-terrorist group you’ve ever seen. Fisher doesn’t trust Briggs or Grim (due to her role in Conviction), and seems to put up with Charlie because he’s the only one who can upgrade his gadgets.

As out-of-place as this team sounds in a Splinter Cell game — they would make a perfect fit on Hawaii 5-0 or any other procedural cop show — their chemistry makes it work. You can talk to them after every mission to see how they’re feeling or to participate in their optional cooperative multiplayer missions. The light comedic elements in their dialogue provide a much-needed break from Blacklist’s oppressive themes of international espionage and murder.

The team’s impact reaches far beyond the story, too, like when Briggs joins you in the field as a playable character. He’s not a mirror image of Sam Fisher: You play him from a first-person point of view when he’s piloting a UAV drone, providing sniper fire, or just running through a level to shoot up bad guys. He changes the formula just enough without straying too far from the stealth mechanics. One of my favorite missions switched back and forth between Fisher and Briggs as they tackled different problems.