It was odd to attend a giant press conference yesterday as Activision showed off the multiplayer combat mode for Call of Duty: Ghosts. After all, it was a big press event dedicated to just part of a video game, and the gaming world was glued to it.

But it’s hard to understate how critical the multiplayer mode is to the giant game publisher’s ability to reach and engage tens of millions of players since multiplayer is what keeps a Call of Duty game alive for a long time after it releases. It is why, many months after Call of Duty: Black Ops II first shipped last November, 10 million people are playing Call of Duty every day. For hardcore players, multiplayer is a year-round occupation while new players just want to survive it long enough to see what all the fuss is about.

I’m somewhere in between. Amid the darkened tent and deafening rock music, I tried my best to shoot as many of my journalist colleagues as possible in hands-on combat. It was a challenge for me to stay alive for more than 30 seconds at a stretch.

The multiplayer sessions made me think about how difficult it is to balance the multiplayer games for both “noobs,” or new players, and hardcore veteran gamers. After all, more than 40 million people played Call of Duty in the past month. How many of those are the dedicated hardcore? How many are noobs trying to tag along with their friends? There are all sorts of players with different preferences, and they’re all very demanding. If the game is too hard or intimidating for the noobs or too easy for the pros, then Call of Duty will stop defying gravity and eventually see its sales falter.

I looked at my hands-on experience through the prism of a veteran as I was able to hit the top level of Prestige — the highest rank in multiplayer — in last year’s game. At the same time, I’ve also looked at it through the eyes of a noob, as many of my multiplayer matches end in ignominious defeat and my colleagues are frequently able to beat me into the dust. 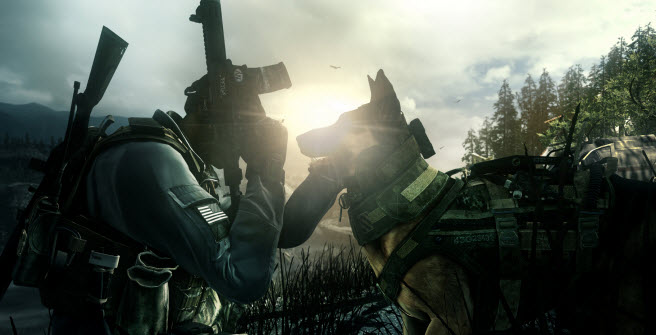 The hallmarks of this new multiplayer mode for Ghosts are its better graphics, which are worthy of the upcoming next-generation consoles. You’ll notice that everything looks sharper and more realistic, with shadows and proper lighting in complex scenes. But the game will still run at 60 frames per second, or split-second speeds. That’s a hallmark of Call of Duty games — they’re pretty and fast — and it looks like Activision is delivering on that.

Now you can also have your best friend in the game. Your companion dog, Riley, serves as a drone-like scout, detecting enemies for you and ripping their throats out. But you have to be something of an expert to earn Riley as you need to get five kills in a row. The dog is generating a huge amount of attention because it is a character that players can get attached to, both in single-player and multiplayer.

And you can infinitely customize your character, which means that, for the first time, you can play as a female. Mark Rubin, the game producer at developer Infinity Ward, told me in an interview that adding women wasn’t just about seeking new audiences for Call of Duty. It was about recognizing players who already play the game and really want to choose a character that looks like themselves. This is a feature that makes it more accessible as a game, and so chalk one up in favor of the noobs. It is also a way for veterans to proudly declare their own identity through the game.

I welcome the female characters though I suspect that we’re going to get lots of dudes playing as females. And I like the idea that each character I create means something now. It looks like me, but that avatar also goes into my squad, a collection of soldiers who represent the variety and depth for what I can be as a Call of Duty player. You can level up with as many as 10 squad members.

I didn’t get a chance to play around much with the character creation. So we’ll find out more about that later in terms of how flexible it really is.

Where you really get to customize your experience is with the freedom to equip your soldiers with unique weaponry and perks. 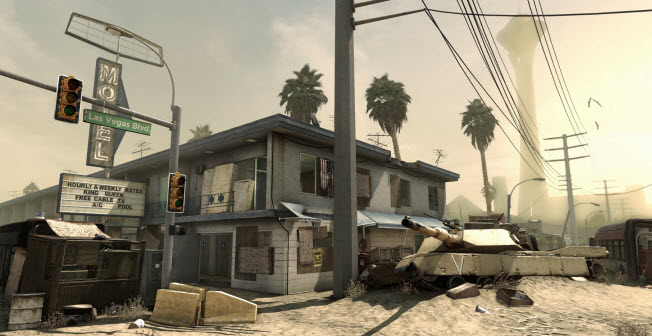 I moved into action as a grenadier. I could have also entered as a sniper, engineer, or other type of specialist. But producer Mark Rubin at Infinity Ward pointed out that you aren’t just creating a class of character this time. You’re creating a unique soldier using the Create-a-Soldier customization system. You pick your weapon by spending a number of points on it. Your decision leaves you with either more or less points to spend on secondary weapons and accessories such as flashbang grenades. You can wind up with 20,000 combinations of characteristics.

You can create up to 10 soldiers, and each can level all the way to the top, dubbed Prestige. Your squad becomes an entity in itself that can level up and earn experience. Your friends can challenge your squad even when you’re offline.

Since my accessories included grenades, I made a point to toss some into a cave or over obstacles and walls. I hoped for the best, but usually the time it took to toss the grenade left me vulnerable to gunfire.

In the first few rounds, I had to remember how to play, and so I died twice for every time I shot someone. Once I got used to it, I did reasonably well, getting eight kills and nine deaths in one match. I didn’t have leveled-up weapons with great gun sights. But neither did anybody else.

The assault gun is still a trusty weapon. If you squeeze off a few rounds at your target with an a gun called the Honey Badger, you can take out your enemy very efficiently. But if you spray bullets wildly while trying to take down a running target, somebody else will inevitably detect your gunfire and take you down.

If you’re a good shot, you can survive for more seconds than your counterparts in multiplayer, and that means you can kill more people in a row, earning “Killstreaks.” If you can’t hit anything, there are ways to compensate for that. You can support your team by dropping ammo for them or use weapons and tactics that make up for your inaccuracy. 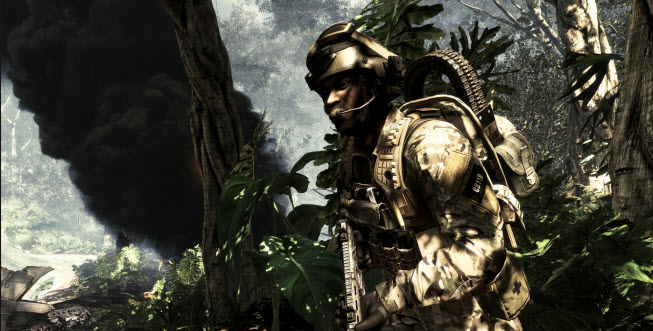 Activision showed off a few modes that shape very different styles of gameplay. With Cranked, you can enter “cranked” mode for 30 seconds after you get a kill. You have to get another kill in that 30 seconds or you explode. That motivates a very aggressive style of play. This kind of mode favors the noobs because it forces everyone to take wild risks by running toward the action rather than sitting tight and waiting for players to come to them. The vets will like this mode because it lets them rack up a lot of points.

I liked Cranked because it leveled the playing field and motivated me to get Killstreaks. The Search and Rescue mode was very different. Inspired by Search and Destroy, this mode could leave the noobs feeling burned. If you get shot once, you could be out of the game. But if your ally picks up your dog tags where you fall, they can revive you and put you back in the action. If the enemy grabs your dog tags, you’re out of the round for good. Each round has an objective like arming and blowing up a bomb or defending a cache and defusing a bomb.

Activision showed Domination mode on an arctic map that looked very pretty. Snowflakes, fires, and smoke factored into the gameplay because they could obscure your vision. This is my favorite mode of play as you have to capture three flags on a map and hold them while preventing the enemy from doing the same. In this battle, the B flag was placed in a cave where all of the combatants gravitated. Each side tossed grenades into the cave and charged. But the smarter players went off to capture the flags at points A and C. In this mode, you can get points for your team by capturing flags. You don’t have to be the best shooter. In that sense, the noobs will welcome the return of Domination.