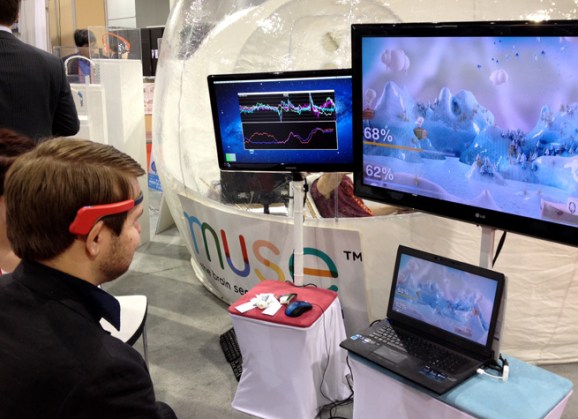 VANCOUVER — Thirty-four minutes ago, Interaxon closed a $6 million series A round of investment.

CEO Ariel Garten just announced the news today at Grow Conference in Vancouver, where she demoed the company’s product, the Muse, which has six sensors that replace a traditional head-covering EEG machine in a single slim, attractive headband.

“Muse is the brain-sensing headband that allows you to track your cognitive and emotional activity,” Garten told me after her speech. “It boosts your attention and helps you become more aware of the emotions that you’re having.”

Interaxon started with a successful Indiegogo campaign that raised almost $300,000 and funded the company’s first production series, Garten said. Now the company has followed up that crowdsourcing success with a very healthy series A. Investors include OMERS, Ashton Kutcher’s investment company; and FFEC, which led the initial seed round in Interaxon.

The headband enables you to “control games, reduce stress, improve memory and concentration,” Interaxon says. Eventually, you’ll be able to control devices around you, and perhaps things like home automation, simply by thinking.

Right now, the money is going to improve the company’s technology and to build its market.

“We’re going to use this money to get more devices into the market,” Garten told me. “We’ll also build out our team, and build better algorithms.”